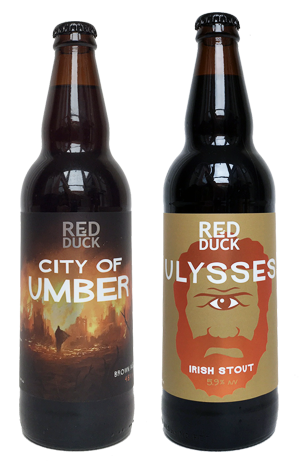 Take your eyes off Ballarat's Red Duck for a moment or three and you never know what might happen. Well, there's a good chance a whole new bunch of beers will appear – possibly a braggot or two as well. And, thus, here we are with a series of catch up posts for a bunch of recently and about to be released beers.

City of Umber is a brown ale conceived by Red Duck brewer Ryan Fullerton and delivers what you'd want from such a beer – within its chestnut body you'll find toasted nuts, chocolate, cola, cocoa and a hint of raisins and figs. There's a mild, earthy bitterness and a fuller body than its sub-5 percent ABV might lead you to expect.

As for the Ulysses Dry Irish Stout, the aim was to create a deliberately one-dimensional beer, with that one dimension being the drier, roastier end of the stout scale. They brewed with Irish malts and went seriously hard on the darker ones; it pours jet black and viscous with an aggressively dark brown head and presents very dry and very roasty – like an intense after dinner espresso, an uber high percentage dark chocolate or the outer later of a piece of beef that's been cooking on a BBQ for hours. There's some sticky dark fruits looking to poke through; good luck to them!

Available from the brewery cellar door and select VIC outlets.

Or, if you're quick enough, as part of a 12-pack special for Crafty Cabal members.