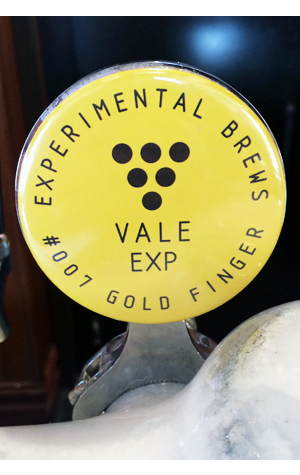 Having hit 007 in their series of occasional experimental releases, the team at McLaren Vale really had no option but to enlist the spirit of Bond. Not only that, but they've snuck in a nod towards the Mike Myers Bond spoof Austin Powers too. In keeping with the Bond theme, the beer is called Goldfinger (and is thus a golden ale); with regards to the International Man of Mystery, the beer features Enigma, the new and set-for-stardom hop from Tassie's Hop Products Australia.

According to head brewer Jeff Wright: “Goldfinger is all about citrus flavours and aromas, set against a background of subtle melon and spice. Golden in the glass, expect a moreish lemon-inspired note of bitterness within this smooth and stylish brew. We’ve used Enigma hops, which offer a mysterious fruity character which mingles seductively with the international tang of the Japanese Sorachi Ace. The mouthfeel is light to medium and well rounded, thanks to a bucket of Vienna malt and a couple of good handfuls of wheat.”

Save On Vale & Fox Hat