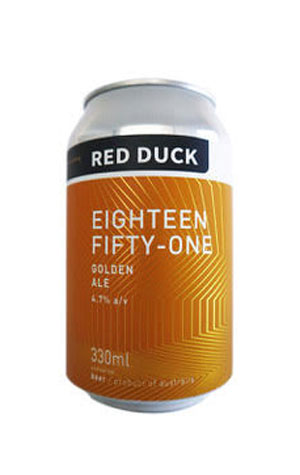 For all the oddities and experiments that make their way from Red Duck's Ballarat brewery - braggots, sours, spiced beers and so on - they do release a fair few "normal" beers too. In fact, of all the Red Duck beers we laid our lips on in 2013, one of the best was Topaz, a simple, single hop pale ale that was just exactly as such a beer should be. Along the same lines was Wooly Nelson, a single hop ale that used NZ's Nelson Sauvin.

It's the latter of these that took up residence in 1851 with the brewery's permanent range (as part of a realigning of the permanent range and streamlining of limited releases). It's a golden ale lifted by the hop's distinct aroma and named, presumably, after the year in which gold was first discovered in Ballarat.