A Good Week Of Beer

A Good Week Of Beer

Good Beer Week might be taking a breather in 2022, but if you’re in Victoria during the week and a bit in which it was originally scheduled there's no shortage of opportunities to enjoy good beer.

You'd have to be paying a first ever visit to this site not to be aware The Crafty Pint's own slice of Good Beer Week, Pint of Origin, is going full steam ahead with 17 venues bringing the world of beer to Melbourne. You can check out everything that has to offer, including the all-new digital #PoO22 Passports, here. We even learned earlier that one of the host venues, Westside Ale Works, will be hosting a fundraiser for Ukraine on the opening night, featuring four beers from Pravda Brewery they've brewed here in Australia.

There's plenty more going on besides Pint of Origin, of course. With the Australian International Awards dinner taking place on May 26, there are plenty of events taking advantage of the number of beer industry figures coming to Melbourne, including some long-running GBW icons: Mountain Goat, Matilda Bay and Moon Dog collaboration launch, Abbey Collabby, which this year features live music at Collingwood's Children's Farm, and Boatrocker's epic degustation with chef Rob Kaboord, De Vrolijke Boot, now in it eighth year.

The Local Taphouse in St Kilda has no less than four events running over the course of the week – the return of the Great British Beer SpecTAPular, Brewers & Chewers, a special edition of Ale Stars, and a beer and cheese pairing – while sibling business Stomping Ground plays host to a Beer Aficionados Brew Day.

Co-founder Steve Jeffares says that some of their GBW events have become calendar highlights for both the team and their customers, ensuring they were eager to keep them going. In the case of Brewers & Chewers, which combines dinner, beer tasting and speed dating with brewers and has been running since the festival's earliest days, the chance to invite some of the country's most exciting brewers to join them while in town was too good to pass up.

“That’s a highlight for our team and a lot of our Ale Stars, so we thought there was still the opportunity with some great brewers in town for the AIBA to do it,” Steve says, adding that, for the British version of their long-running SpecTAPular series: “We get a lot of English expats who just love coming along to it so we wanted to keep it on.

“We’re certainly happy with how ticket sales are going but we’ve been running them for so many years we have a bit of an engaged audience."

In Melbourne's west, Hopheads' three venues will be spending nine days celebrating the wide world of hoppy beers as part of their IPAppreciation week. Owner Adrian Chong says that, given GBW normally runs close to the anniversary of the opening of their first venue in Point Cook, they felt it was natural to run the event as a form of extended seventh birthday party.

“It’s a celebration of the style of beer that’s really the foundation for Hopheads way back when," he told The Crafty Pint. "We already had a bit of the groundwork going before Good Beer Week was cancelled too, and we thought it could still be a really good thing.”

As part of the week, Adrian and his team are also hosting two beer and food pairing events – one a moving feast featuring Casey Brewing from Colorado, the other California's lauded Bottle Logic. And while he says tickets could have moved faster, Adrian suspects there are other issues at play when it comes to securing sales.

“Things have been a bit slack for the last six weeks anyway," he says. "But I don’t know if that’s a collective tightening of belts everywhere, and I have heard that numbers have been down across the board in bars and restaurants.”

As for what to expect from their celebration of IPAs, the venues in Point Cook, Altona and Yarraville will be pouring around 90 IPAs from across Australia and the world, a selection that runs the full gamut of IPAs out there.

“It’s IPAs up the wazoo," Adrian says. "We’re not mucking about here, it’s an IPA-focused tap takeover; there will be a lot of hops – all kinds of hops – but a lot of hops."

A selection of events running between May 20 and 29 are listed below. You can find even more here.

3 Ravens – Woods of the North VI

The Thornbury brewery's celebration of all things wood-aged is returning on May 28 across two sessions. Each will feature barrel-aged beers, oaky boilermaker pairings, barrel-aged beer cocktails, wood-smoked and coal-fired canapés, and wood-themed live entertainment. Further details and tickets can be found here.

The long-running annual Good Beer Week collaboration between Moon Dog, Mountain Goat and Matilda Bay that arose from their proximity in the Abbotsford/Richmond locale is set for an impressive twelfth edition in 2022. It's taking place on May 25 at the Collingwood Children's Farm with music courtesy of DJ Adriana, Jess Ribeiro and Steel Wheels plus food from the Bluebonnet BBQ.

The good drinks retailer and the brewery have brewed not one but two collaborative beers that will both launch on May 25 at Perry's. The first of those beers is The Tortoise – a Helles Lager – and the second is (you guessed it!) The Hare – an NZ hazy pale ale. The launch includes a full tap takeover, arcade games and the chance to meet up with the brewers. Find out more about the race here.

If you're a fan of excellent beer and questionable sporting prowess, get yourself to Geelong for Blackman's Second Australian/International Ping Pong Tournament on May 22 (pictured at top of article). Tickets cost just $15 which includes entry into the tournament and a pint. Join in here.

For the eighth time, Boatrocker and chef Rob Kaboord are partnering for a unique and highly memorable experience that centres around a six-course feast where the surprise menu will be paired with something special from Boatrocker's fine back catalogue, be it beer or spirit (or maybe both...). Get on the Merri Boat here.

Co-Conspirators are hosting a first degustation dinner with their Small Axe pals at their Brunswick home. The evening includes a four-course feast paired with four beers and the launch of an Italian pilsner known as The Nonna. Take a look at the menu and grab tickets here.

Colonial Brewing's Draught Punk Beer Fest is back for 2022 and bringing with it everything you'd want for a good night out at their Port Melbourne home. On May 21, they'll be hosting a lineup of DJs including Set Mo, DJ Be Kind to Other People, AROHA and more to spins tunes while you kick back and relax – or perhaps get up, if the mood strikes you. Get your groove on here.

Fixation have two events taking place in the week. There's the launch of their eighth Fresh Hatched beer, Death Haze NEIPA on May 21 at their Incubator home, complete with record fare from midday until 4pm and live music from 6pm.

Then on May 25, the team is heading to Fancy Hanks to partner hops with smoked meats for the fifth annual Stick That In Your Smoker & Hop It.

It wouldn't be a full week of beery celebrations in Melbourne without three days of GABS. Tickets are still available for each session at the time of writing – head here to get your tickets. You can grab tickets as a signup bonus when joining The Crafty Pint's beer club, The Crafty Pint, by heading here. While stocks last, of course!

The team at Hopheads has lined up another suitably epic edition of their annual week-ish long celebration of all things hoppy: IPAppreciation, as mentioned above. They're also hosting two other events: the Yarraville Smorgasbord and Bottle, Bean & Hops.

The Local Taphouse is running four events in the shape of the Great British Beer SpecTAPular, Brewers & Chewers, Heavenly Pairings and a special edition of Ale Stars. You can find details of each of them here.

If you're looking for an in-depth guide on how to brew better, Stomping Ground have you covered on May 22. They're hosting Beer Aficionados Brew Day, with head brewer Ashur Hall and a bunch of industry experts guiding you through a brewery tour with a technical bent focused on brewing, processes and ingredients.

Hop Rally II at Tallboy & Moose once again sees the brewpub crew team up Hop Products Australia and the Merri Mashers homebrewers. Each brewer received the same base beer and a different liquid hop product, with the expectation they'll take it home and hop the bejeebus out of the base beer. Further details can be found here.

The Notting Hill Hotel – A Pig Walks Into A Brewery

On May 28, the Notting Hill Hotel is putting two hogs on the smoker for a delicious five-course feast that will be paired with beers from Black Dog Brewery, King River Brewery and Mitta Mitta Brewing Co. Peter Hellier will be there to provide the laughs. Book here.

Wolf of the Willows – Beer Dinner at Le Bon Ton

Wolf of the Willows have again joined forces with Collingwood's Le Bon Ton for a four-course, six-beer degustation with a focus on pit-smoked meats with a Southern American bent (pictured above). There are two sessions over two consecutive evenings and you can join in by heading here.

If you're planning on hitting up Pint of Origin venues between May 20 and 28 (and obviously you should), you'll be able to enjoy 2-for-1 beers by becoming a member of The Crafty Pint's beer club, The Crafty Cabal. Head here for details (and to join the club, obvs). 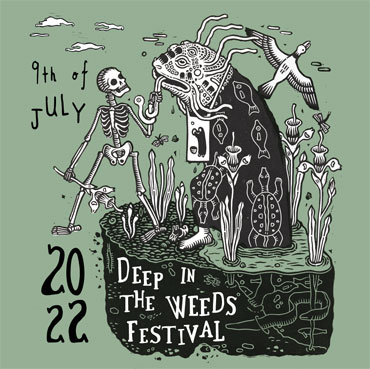