CO2. It’s everywhere. For years, our news cycle has been filled with discussions about what we're going to do with all this excess carbon dioxide we’re pumping into the atmosphere. Out of our cars, out of our livestock, and out of our own damn mouths every time we exhale.

Sadly for those of us fond of a beer or two, this rather out of vogue gas is also a byproduct of brewing. According to The Algae Project, it takes a tree two whole days to absorb the CO2 from just one six-pack of beer. Even if you give up your car, red meat and exhaling, you’ll still be contributing to CO2 emissions every time you crack open a beer.

Luckily for lovers of an ethical cold one, Sydney based rock ‘n roll brewers Young Henrys have been working with the University of Technology Sydney Climate Change Cluster (C3) since 2020 to make brewing a more carbon neutral process.

Tanks of living microalgae that feed on the excess CO2 and pump out the fresh, breathable and environmentally friendly gas we all know as oxygen, all while looking like a lurid green chamber of sci-fi goo.

Algae already produces half of the world's oxygen (that’s every second breath!) and, according to Young Henrys co-founder Richard Adamson, it can pretty much save the world.

“We met with C3 and it struck me that all the skills you need to grow algae were pretty similar to managing yeast at the brewery, it just does a different job.

“If you have the two things together maybe you have this balance; the yeast is growing the beer for us and the algae is mopping up the CO2. And then if we could have a further use for the algae we’d be doing two things with our waste streams [and] that would be a good thing.”

Algae has been used by breweries around the world before; Carlsberg, for example, have experimented with the use of microalgae in wastewater treatment. However, using it to reduce CO2 is an Australian original and an idea Young Henrys are proud to claim.

“It was a bit of a crazy idea but the UTS C3 were like, ‘That will work. We’ll help you research that.’ As everyone heard about it and thought about it more, everyone thought this could have a really big impact," Rich says, "which is exciting.”

According to Rich, incorporating living algae into the brewing process has been surprisingly natural and intuitive for his brewing team, even if it meant learning a few new things along the way.

“I think brewers are bucket chemists," he says. "We come up with crazy ideas, we put them all in and see what happens, crossing our fingers to see if it turns out delicious. The brewers really dig looking after the algae now, which is cool.

“The idea is the algae that we grow, which is sequestering the CO2, then goes out with our spent grain which becomes a cattle feed supplement. And then that reduces the methane that the cattle burp out.”

No, you did not misread that part. Cattle burps are firmly in the sights of the unlikely partners.

The success of the project to date has brought the coconspirators to Phase 2 – something they believe has the potential to do far more than decrease the carbon emissions of just one brewery. It involves a partnership with Meat & Livestock Australia (MLA), encouraging more breweries to get involved, and a whole bunch of little cow stomachs.

“When we met the people at UTS working with microalgae, I thought that if we use the CO2 we are generating from fermentation to accelerate the growth of the algae, and we could then use that algae to go to cattle that our spent grain is already going to, we could have a larger impact on reducing our greenhouse gas footprint," Rich says.

“I’ve learnt a lot about cow stomachs and the microbiome. I knew nothing about that before."

He adds: “We thought we needed a partner in the meat game to help us with the live animals. They [Meat & Livestock Australia] have obviously recognised that they need to reduce their greenhouse gas emissions to make the industry more sustainable, so they’ve set their own targets and had their own grants running for some time.

"When we applied for it, it was totally up their alley in terms of what they wanted to achieve and it kind of went from there."

Phase 2 entails more testing in the lab to ascertain which strains of algae are likely to perform best. The team at UTS harnesses ruminant fluid from cows in synthetic “cow stomachs” to assess the right dosage of algae for maximum methane reduction; the project's goal is to find the lowest percentage of added algae in correlation with the greatest reduction, minus any impact on digestion, milk, or meat production qualities and quantity.

“Utilising a bioprospected Australian algal strain, we have seen promising results in our lab trials so far, and anticipate the on-farm trials to show the scalability of this proposed climate solution,” UTS' Janice McCauley says of the results so far.

Once they've identified good candidates to work with, they'll start the next phase with lambs – "because they eat less, so we don’t need as much algae to test," according to Rich – before moving onto cattle. Then it's onto Phase 4, which would see CO2 from the brewing industry captured to help grow large quantities of microalgae, which would then be turned into a livestock feed supplement that reduces the methane emissions in livestock.

“We’ll have to be growing a lot more algae once we get through that first gate," Rich says. "We’re going to have to produce a lot more to feed the lambs and then the cattle; we’re going to need some help from some other breweries to grow some more algae.

"We got a heap of interest, particularly from the inner west breweries, but we’ve had interest from around the world.”

And, while the concept remains in its early stages, Rich is hopeful the science will back up what they are trying to achieve. After all, using beer to improve the quality of cow burps might sound inherently daft, but once you realise livestock is estimated to be responsible for 14 percent of all greenhouse emissions from human activities, it quickly becomes less of a laughing matter.

“Hopefully the crazy idea is proven to work," he says. "We’ve got some promising results but we won’t know until it goes through the whole battery of testing. If not, at least we’ve contributed to the science, but I really hope it does what we hope it does because that will mean breweries have an important role within that whole ecosystem, and we can use our waste streams to reduce our greenhouse gases in agriculture.

“That’s sort of like doing a whole circle, it would be amazing.

"We’d love to see breweries all around the world doing it because that could have a significant impact on agricultural greenhouse gas emissions.”

The MLA are just as keen to be part of the change. While LNP infighting continues around future targets ahead of COP26, Doug McNicholl, the association's program manager for Sustainability Innovation, said in a statement: "The Australian red meat and livestock industry has set a target to be carbon neutral by 2030 ahead of most other industries in Australia and around the world. So far, net emissions have fallen 53 percent since 2005, representing by far the greatest reduction by any sector of Australia’s economy, but there is more work to be done.

"The industry is investing in the latest research and technologies, such as natural feed additives, to further reduce livestock methane emissions from livestock to reinforce Australia’s reputation as a global leader in sustainable food production, delivering high value, high quality products to Australia and the world."

It's an undeniably forward-thinking ambition for all involved, but one key question remains: would Rich and the Young Henrys team ever consider giving this full circle approach another spin and raising awareness by putting algae in a beer?

“We’ve thought about that," he says. "There is a possibility we might do that.

"We looked at one that changes the colour of [the beer] and it actually comes out bright blue. It didn’t taste too bad either, kind of had a bit of that umami flavour. You could definitely taste it, I kind of like it.”

As for The Algae Project proper, there's still a long way to go: many lenses to be gazed through; many animal guts to test; the tantalising possibility of algae beer.

But, for now at least, beer lovers eager to see our planet survive can rest assured there are brewers in our midst who care about reducing their CO2 emissions by using nature, creating the delightful possibility that one day the meat-eaters among us could enjoy a steak carved from an animal fed on spent grain from a brewery, washed down by the beer that helped make it carbon neutral.

You can follow The Algae Project here and find other features in the Going Green series here. No Beer On A Dead Planet

On September 20, people across the planet will join young campaigners for #ClimateStrike. The Crafty Pint will be one of the local beer businesses taking part and hope more people in the Aussie beer world will join us. read on Bright Brewery have long put sustainable practices at the core of their business and are now looking to take a recycling initiative nationwide. read on 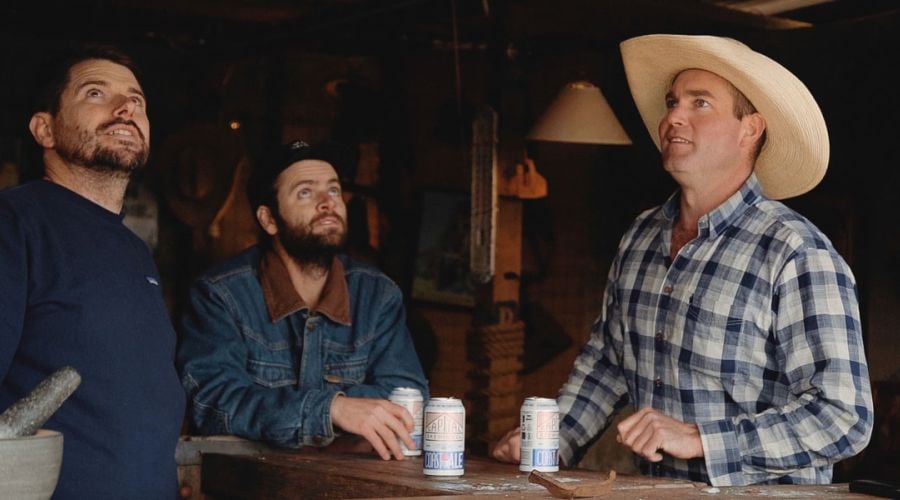 Capital Brewing are on track to become the latest Australian brewing company to achieve B Corp status. We chatted to the man driving the process for the Canberran brewery. read on