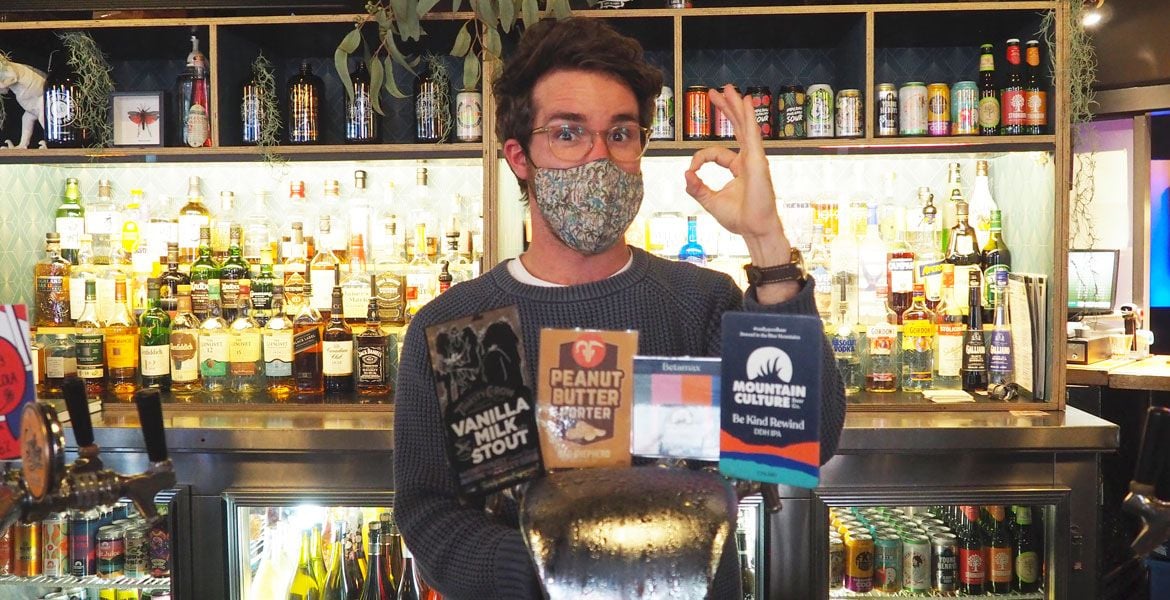 Many businesses across Sydney and New South Wales opened to customers for the first time in more than three months yesterday. Two members of The Crafty Pint team were among those heading back to the bar.

Benedict Kennedy-Cox: It's 11.59am and I am waiting out the front of the brutalist cinderblock wall of Philter Brewing in a drizzle of rain. Alongside me are four others ready to check in with their vaccine record in addition to the traditional ID. The sky is grey, the air cold, and I am more excited to have a beer than I was at the year 12 formal.

Judging by the amount of people trickling into a brewery at midday on a Monday, it's clear punters are keen to get out to their locals again. By the time I've finished my chat with owner Stef Constantoulas, the venue is looking as lively as any casual Saturday afternoon.

“We want people booking but if they happen to be passing and feel like a beer we don’t want people to miss out. We want to encourage people to come in, sit down, say g’day, have a beer then enjoy a few more at all the great pubs and venues in Marrickville.

“We’ve still been here but what we’ve missed and what we’re excited to see are just people coming in for a drink. We’ve missed you!”

Judd Owen: I walk into Batch just before 3pm to be met by a handful of happy punters with their beers. On the way there, the only lines I saw were for hairdressers and Centrelink.

With a small tasting room to manage, it was mainly Tom Piggott (pictured below) slinging beers and asking for check-ins and vaccination records, with more staff set to come in as it got closer to knock-off time.

“It’s been way better than I thought it was going to be,” he tells me. “Almost everyone has been excited to show their vaccination certificates.

“The excitement was palpable from the first two customers who walked in at 10.05am for a couple of tasting trays. I thought they were going to cry.”

My feelings echoed Tom’s – everyone was being very nice about it all, seemingly relieved to be back out in the world for a beer. Batch had been operating both their venues throughout lockdown, selling takeaways with an insanely good value deal on growler and squealer fills, which meant, for the most part, they retained all their staff and had a steady supply of fresh beer to rely on.

There’s a very good chance the god-awful weather kept some people away, but the staff at the venues I visited seemed pretty happy about that: both had been hoping to not get hammered and that was the case, at least until I headed home.

BKC: Over the first schooner from a glass that I'm not responsible for cleaning for longer than I care to remember, Stef explains how the initial loss of revenue and an "it is what it is" mentality led him and the other owners to focus on their online sales while Philter's doors were closed.

“We saw an increase online massively," he says. "It went crazy, literally crazy. This whole space last week was like a little warehouse."

Looking ahead, he believes consumer behaviour will probably change.

"A lot of consumers that were apprehensive about ordering beer online now know that it is a way you can shop," he says. "People now know that you don’t have to live by your favourite brewery to get a good range of beer.”

Lockdown was also a catalyst for the Philter team to get moving on the opening of a second space in the brewery. While it was always something they wanted to do, having time to work on it gave them a chance to focus – and a whole new reason to be excited about reopening.

“Can’t say too much about it," he says, "but you’re really going to love it come November!”

As for the mood around reopening, Stef's taking an optimistic outlook while acknowledging the realities of brewery life in a state emerging from lockdown.

“Really, we are looking forward to getting all the staff back and getting into the swing of things. Having people going out, enjoying it and having fun, enjoying the space. It’s why we built it," he says.

“We are going to be a bit more diligent. You’re gonna have to wait longer to get in and we make no apologies for that, we gotta do all the checks. If a table has only just been used for just one drink, we gotta make sure we properly clean it, the chairs, the whole lot.”

JO: After Batch, we headed to Union. It was just after 4pm and there were probably 20 or 30 punters spread around the much larger venue. Owner Luke Hiscox (pictured at the top of the article) was busy out the back trying to order enough beer to avoid running out this weekend, so we settled in for a couple and to soak up the atmosphere.

I kept a lazy eye on the entrance to see if there were any dramas with people checking in and what immediately struck me was the bloody big smiles revealed from under every mask. There didn’t appear to be any shenanigans going on with check-ins – staff seemed happy to help people find their vax records.

Talking to Luke later on, it’s immediately obvious the two big issues facing hospo right now are finding enough staff and compliance. He’d heard through the industry that there are literally thousands of jobs vacant that would normally be filled by casuals, backpackers and the like. He has some kitchen staff who can’t start work for weeks due to visa conditions, next to no kitchen hands, and is daunted by the task of finding a chef.

“Vacancies were bad enough 12 months ago," he says, "but now it’s impossible.

“If you have been open for the last three months you’ve been frantically trying to stay afloat while checking in on your staff and keeping as many people in a job as you can.”

There's a rather more pleasant challenge ahead too. The Union, which famously doesn’t do cocktails, started making takeaway cocktails as an extra revenue stream on weekends and they proved so popular Luke is now facing the prospect of having to either install pre-mix cocktail tap fonts, or make room at his bars for cocktail-making once again.

That said, he feels this re-entry into life as a publican has been easier than the period that followed last year's lockdown: there's a sense of relief boosted by patrons' willingness to comply with new rules.

“It feels so much different than after the first lockdown," Luke says. "Today feels good, but last time I felt like I’d forgotten how to run a bar. There was also so much more uncertainty. It was like, ‘People with COVID are absolutely going to come in here and we’re going to die.’ Doesn’t feel like that today.

“Security expenses are going to be rough for a little while, I think, [and] I’m very excited but daunted by compliance. We haven’t seen police or licensing yet today but when they do come through Newtown I’m sure there’ll be fines, fines, fines.

"Everyone’s trying to do their best but the rules change frequently and it can be so hard getting answers from anyone on what we need to do. I mean, we haven’t even been able to get proper advice on the legalities of removing people on the basis of vaccination status.”

By the time I left just after 6pm, the venue was at capacity with people waiting outside to get in. Generally, it was a wonderful vibe around the place with everyone seemingly just bloody chuffed to be there.

I thought it was going to feel weird and stilted, but from the first sip it was as if we’d never left.

For more on the hopes, fears and challenges facing businesses in the locked-down regions, check out yesterday's reopening article. Victorians To Take To The Streets

Victorians could be heading to the streets (and rooftops and parks) as part of the state government's plan to bring the hospitality industry back to life in a COVIDSafe manner. But questions remain over what the future holds. read on