It’s hard to think of too many places you can work as a brewer that are as distinct from one another as Singapore and Alice Springs. But that relocation is one made recently by Jum Ryan when he became Alice Springs Brewing Co's head brewer after leading brewing for Little Creatures in both Singapore and Hong Kong since 2018.

The move from one of the most populated parts of the world to one of Australia's most isolated towns came in part due to COVID, with Jum only planning to return to Australia for a brief period after leaving Little Creatures early in 2020.

“I was only home for a festival and then everything closed down,” he says. “So I was of the very few people who were stuck at home, rather than being stranded overseas.”

It meant Jum's plans to travel the world were put on hold; instead, he spent much of the year locked down in Melbourne before spotting the role in Alice Springs and starting work there in March. Prior to that, he'd started at Little Creatures in Fremantle a decade ago after studying brewing at Edith Cowan University, before making the switch to Geelong.

“I worked in Geelong for five years, then I went out to look after Creatures in Singapore and Hong Kong,” he says.

Those cities might differ widely from the centre of outback Australia but Jum says there are some similarities, including the size of the system he's using to brew beer. That said, he says Alice's 500-litre setup require a little more manual handling compared to those he brewed on in Asia.

“I think [Alice Springs Brewing’s founder Kyle Pearson] was a bit worried that I was going to be coming in having worked on million-dollar systems and it is a bit more manual than I’ve been used to,” he laughs.

At the Creatures brewpubs, Jum's focus was largely on experimental releases – he largely had free rein over what he wanted to brew. In Alice Springs, as the only brewery in town, their focus is a little more on sessionability, while Jum says they've also had to focus mainly on their core range so they can keep up with demand.

“[We’re] about getting people into craft beer and not about pushing boundaries too much," Jum says. "We brew pretty sessionable beers because it’s hot; I mean, we will brew IPAs but you definitely don’t need a lot of them.”

The challenges of meeting demand will be made a little easier later this year then they install a new 15-hectolitre brewhouse, which will also make it a little easier to sell their beer further from home. If you’re in Melbourne during Good Beer Week, you won’t have to wait that long, however: both Jum and Kyle heading to Miss Moses on May 20 to host a tap takeover as part of Pint of Origin.

Before they do, we asked Jum to take part in our long-running Brew & A series.

See “How did you first get involved below…”

Dreaming of being a rock star. Wait ... I do that anyway.

Completely by accident. It all started with a bad date, which I thought had gone swimmingly, which led to a series of fortunate events and culminated in Hugh Dunn being kind enough to accept a washed-up music teacher into his brewing degree.

My favourite was Lunar, which was a Belgian wit brewed for Chinese New Year, with osmanthus tea in the kettle providing the sweetest of apricot aromatics.

Starting with reverse osmosis water makes the required precision in water profiles a lot easier from the outset...and for everything else to fall into place. It's essential in Alice Springs considering the hardness of the water drawn from the local aquifers so our filtration system receives plenty of TLC.

A “Santa’s Spiced Ale” for Christmas in Singapore which didn’t exactly move quickly. I’m sure it was gone by Easter, although did undergo a rebrand along the way... I can’t quite recall the second name.

It’s Viking themed, so hopefully I could play with the swords. Beers are great too. Oh, I also need another t-shirt.

New Belgium’s Asheville home is the schmickest kit I’ve seen... coupled with the 3D murals around the place it would be a whole lotta fun!

I know they’re from Vietnam, but [head brewer Duane Morton] is Kiwi so... Heart of Darkness. Great people, cracking beers, and the branding is tip-top. The taprooms also feature 90s heavy playlists which is the icing on the cake!

Music. Particularly live gigs – obviously, the past 12 months have been a bit of a drag...

Neil Young – On The Beach and not just because of the beach reference, it’s impeccable.

Always be open to learning.

If you're keen to meet up with Jum and Kyle from Alice Springs Brewing, head into Miss Moses on Thursday, May 20. Details of what's involved are available here.

You can find other Brew & A features here and Alice Springs Brewing Co and hundreds of other good beer venues around Australia in the free Crafty Pint app.

Articles by Will
brew & a Alice Springs Brewing 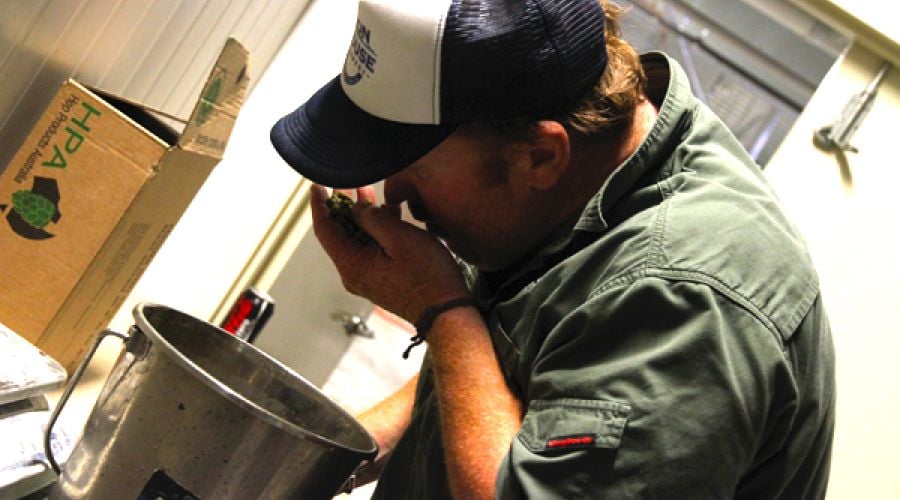