The Northern Beaches suburb of Brookvale was already teeming with locally-brewed beers, and now it has welcomed a new addition to the fold: Bucketty’s Brewing Co.

Founded by Nick McDonald (pictured above with wife Lexi), the fledgling operation was born out of a love for his former hometown of the same name, located in the Upper Hunter and with a population of around 200.

After developing an interest in beer at an early age while helping his homebrewer dad, Nick and his wife initially decided to try to open a brewery near their home in Bucketty. But, once they'd found suitable land and obtained the all-clear from a number of agencies, a change in state government classifications stopped the project in its tracks.

The blow to their plans didn’t derail their ambitions, however; instead, Nick turned his gaze towards Brookvale, less than ten minutes from his new home in Curl Curl.

“We got pretty attached to the idea of having a brewery,” he told The Crafty Pint. “All the energy and all the dreaming that had gone into that first idea of opening a brewery was still there, so we just thought, 'Why don’t we try and bring Bucketty’s to Brookvale?'

“That’s why we kept the name: Bucketty is a beautiful place and we wanted to showcase it.”

Opening in Brookvale wasn't without its own challenges either, but close to four years after setting out to follow their brewery ownership dreams, Nick and Lexi finally opened the doors of the brewpub to guests in February.

The moment when Nick found out they could finally open was one he says he'll never forget.

“It was so touch and go for such a long time,” he says. “That moment, that feeling after all the years of planning and work to get to where we are now, it was unbelievable.”

Now the doors are open, Nick and his brewer Tony D’Astolfo (on the brew deck in the background above), formerly of Six String, have encountered one more issue – but this time it's a good one.

“The response has been crazy since the doors opened,” Nick says. “We can’t brew [beer] fast enough, people just love it. They love the beer, they love the vibe. That’s what brings a smile to my face.”

We invited Nick to tell us more about Bucketty's as part of our long-running Who Brews...? series.

My wife and I are the owners of Bucketty’s and we’re lucky to have Tony concocting incredible beers and Scotty [McKay] managing front of house.

Because beer is amazing! It’s this delicious drink that challenges and delights your taste buds. Then, after a couple, it lubricates all forms of social interaction – and helping create those personal connections is what we’re about.

What’s more, without beer, no white male over the age of 35 would ever dance in public again. And that would be a travesty.

Not really. I’d been brewing a little with my old man as a bit of a bonding thing and gradually fell in love with the process and flavours of craft beer.

Bucketty’s is actually a suburb in the Hunter Valley where we originally purchased land with plans to build a hop farm, cellar door and venue.

However, after a year of argy-bargy, the lovely people at Cessnock Council decided they didn’t want to support Bucketty’s and rejected our application. Instead of giving up on the dream, we decided to move the whole concept to the Northern Beaches and have not looked back since.

Our 2021 Hop Harvest Ale. It took us four years to get a yield from our hop farm and this year was a bumper crop with the stars aligning as we picked the bines the same week our brewhouse fired up.

This beer tastes like resilience and determination with grassy overtones. It’s not the most delicious beer, but it almost never happened, a bit like us. Bucketty’s Lives!

Lager. That’s it – and we’ve almost sold out.

We’re having trouble keeping up with demand on our taps and not able to brew enough to stick in cans just yet.

I’m not one of those guys that goes for the Bum Fluff IPA or Axle Grease Gose. Gimme a clean, well-made beer and some good chat and that’ll do.

On our taps at 26 Orchard Road, Brookvale.

Hopefully, we’ll have a second brewery and taproom actually in Bucketty once the council pulls their finger out. Our goal is to have a mad time brewing, drinking and laughing, so as long as we’re still doing that we’ll be happy.

You can find Bucketty's and hundreds of other breweries and good beer venues in the free Crafty Pint app. And other entries in the Who Brews...? series here. A Drop In The Ocean

For the first time in its history, Phillip Island has an operational commercial brewery. Ocean Reach is a small brewpub operation that opened in Cowes at the end of 2016 and is already winning over the locals. read on 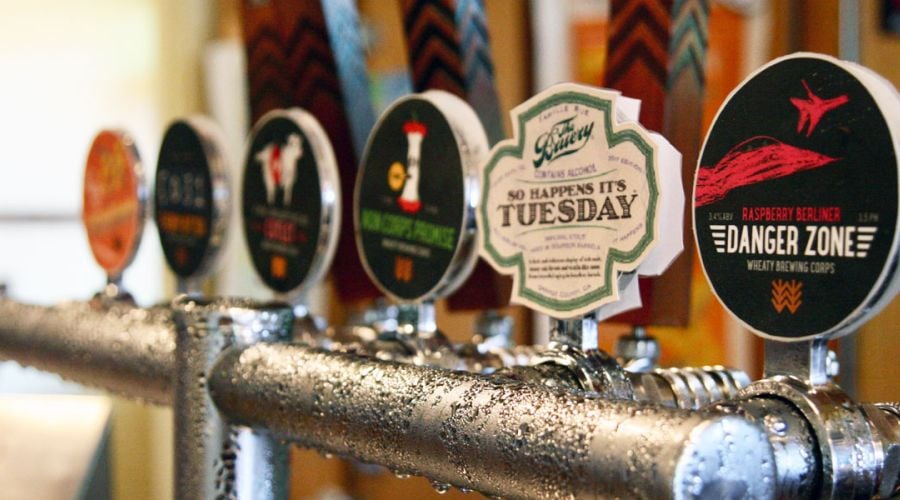 We chat to the woman behind one of Australia's newest brewing companies, Annabel Meagher of Himmel Hünd. read on