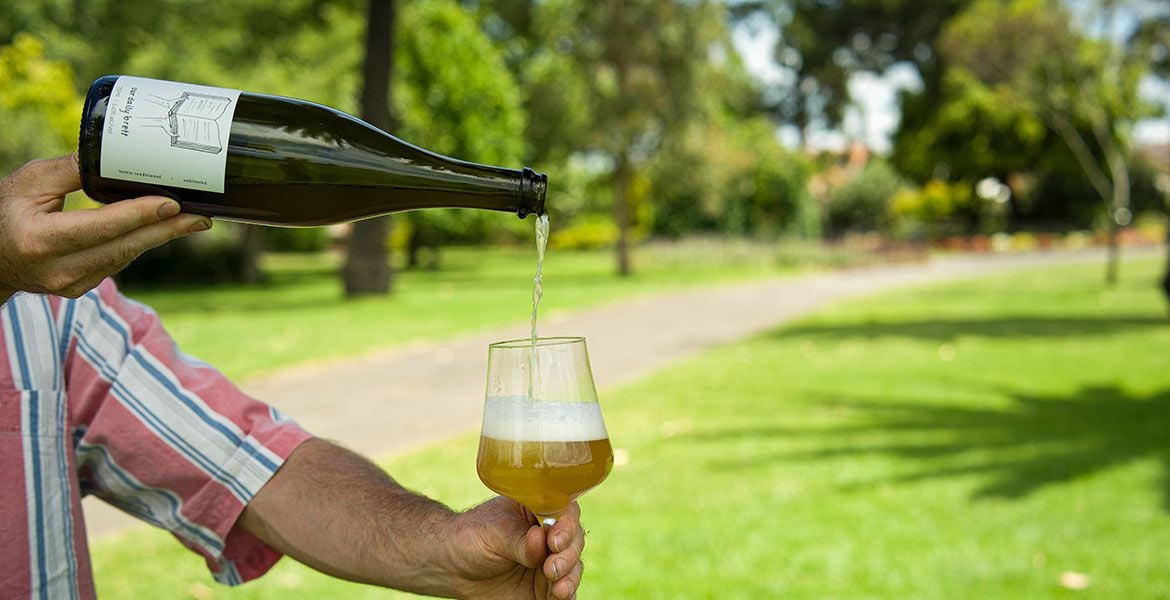 You might not have known there was a word for it, but sobremesa is the kind of practice you likely enjoyed over the past few weeks. The Spanish tradition refers to time spent relaxing at the table after a large meal, when drinks are still being enjoyed and where all facets of life are up for discussion.

It's a key part of what can make Christmas lunch so special and it tends to reoccur throughout the holiday period when nobody knows – or cares, for that matter – what day of the week it is. Sadly, aside from the odd birthday, those moments can too often disappear for much of the year as our lives become busy and long lunches need to be cut short.

It’s those moments that one of Melbourne’s newest brewing companies, Sobremesa Fermentary & Blendery, wants us to celebrate more; ideally with one of their artfully-presented farmhouse style beers in hand. The brewing company, with logo featuring two people sat at a shared table in the sun, launched late last year and is the work of Casey Grieve and Hannah McErlane.

“We’ve had really positive feedback and really authentic feedback,” Casey says of their first two months in operation. “Bottleshops were pretty willing to take it on and it’s a well-needed style; there’s quite a few people doing this kind of thing but the market's definitely not saturated.”

At a time when the local beer world can feel a little bit like everything’s been turned up to 11, and where pastry stouts and lactose-laden IPAs regularly fill fridges, Casey says they’ve been really happy with the response to their first release.

“We’ve had people messaging us through social media saying they enjoy it,” he says.

“I think people are searching for something that’s dry, below six percent, and easy to enjoy without blowing your head off.”

As far as first releases go, Our Daily Brett captures what Casey and Hannah have planned for Sobremesa, with the saison spending four months in barrels with Brettanomyces before being bottle-conditioned for a further two.

That was followed by a collaboration with Mornington Peninsula coffee roasters Commonfolk: a barrel-fermented saison aged on freshly-roasted whole Ugandan coffee beans. Casey says, given the time of year, their next focus is on working to bring local fruit and beer together.

“We’re hoping the weather holds up and we’ll get stuck into fruit season pretty soon,” he says, “We’ve got about three-and-half-thousand litres sitting in barrels at varying ages and recipes because we’re always trying to have something to play with.”

Casey isn’t new to the world of fermenting either. He grew up in New Zealand surrounded by winemaking and became a professional brewer when he started working at Bad Shepherd; he's now brewing at Kensington’s Bonehead Brewery, yet still brews the wort for Sobremesa at Bad Shepherd.

In the future, the couple will look to create other fermented food and drinks under the Sobremesa banner and, while they're weighing up the right kind of home to showcase what they do, for now they're enjoying the new challenge of selling their own beer.

“It’s a different process for me and Hannah,” Casey says. “We were just driving around and conveying our story.”

Here to tell their story are Casey and Hannah from Sobremesa as part of our regular Who Brews...? series. Casey and Hannah; a soon to be husband and wife team.

Casey has always grown up around wine and naturally gravitated to the industry. This took him chasing vintages around the world before studying oenology in New Zealand. He then made the transition into the beer industry – starting commercial brewing in Melbourne in 2016.

Hannah is a registered nurse and has been working in public and private sectors across Melbourne for the last six years. She has always had a passion for photography, inspired by film, travel, culture, and minimalism.

The goal has always been to do something independently and represent our creative journey.

We currently gypsy brew wort at Bad Shepherd Brewing Co and lease a small space in their existing packaging warehouse for our barrels and equipment.

Firstly, we are mad about fermentation...

Secondly, we love to create and experiment. Brewing and blending has allowed us to bring these two passions together, [and the] opportunity to create something special that reflects a time and place and is enjoyed by others is what motivates us.

Casey: I guess the moment would have come whilst winemaking. I was itching to experiment and have the opportunity to create multiple projects within the year and try new things; brewing was the perfect outlet to do so.

We both really appreciate and admire the way Spanish and European culture treats alcohol and food. There are many different interpretations of Sobremesa but the one we took is a cultural definition: the time spent around the table after lunch or dinner, talking to the people you shared the meal with; time to digest and savour food, drink and friendship. We have been engaged in Sobremesa (as I’m sure many people have) for years but never had a word for it.

The reason we went with Fermentary & Blendery is due to our love of fermentation. We will move towards wine, cider and fermented foods down the track.

Our Daily Brett is our first release and is a true representation of our journey so far and how we will continue. It is a barrel-fermented saison aged on lees and conditioned with Brettanomyces.

Fermentation driven, nuanced and highly drinkable. We could drink this all day, every day.

It depends on the day as we both have a diverse taste in music. From People Under The Stairs and The Doppelgangaz to Dope Lemon, Mac DeMarco, Carl Cox, The Black Seeds or Wes Montgomery.

We are constantly impressed and inspired by Wildflower. Molly Rose are also producing some top notch beer and styles we love that are not produced by a whole lot of breweries.

At the moment we are stocked at Mr West, Otter's Promise, The Hop Shop, Grape & Grain, Wine Republic (Windsor and Northcote), Carwyn Cellars, and various Blackhearts & Sparrows stores. We have also just launched our online store.

We hope Sobremesa is known for producing high quality, small-batch and unique beers that can be complex if desired or simply enjoyed. We wish to be flourishing in our own space/taproom, conveying our story and hosting people from all walks of life.

To keep up with what Sobremesa are up to, head to their Facebook and Instagram. You can find hundreds of other breweries and good beer venues across Australia in the free Crafty Pint app.

Articles by Will
who brews? blending sobremesa fermentation