It started with a post on Instagram in which the author said they wished they could shout people in Victoria a beer for what they were doing, not just for themselves but for the whole of Australia. And it got Garrity Hill and Dan Taranto from Armadale's Otter's Promise thinking: what if there was a way?

"There's been so much divisiveness among people," Garrity says. "[The attacks in the media] have been relentless and made it so much worse than it needed to be. But we've done this amazing thing.

"I read on Twitter someone saying Victorians feel like they're in it by themselves and the rest of Australia has forgotten about them. But then others jumped out and said, 'No, no.'

"The reality is very different from how the media has portrayed it."

So, on the day Victorian Premier Dan Andrews finally announced Melburnians would be able to join the rest of the country in getting back on the beers (or something stronger), they've launched #ShoutAVicADrink.

It's as simple as it sounds: if anyone would like to shout a random person in Victoria a drink as a thanks or reward for going through two extended lockdowns – the second one of the harshest of the pandemic to date anywhere on the planet – they can head to the Otter's Promise website and buy one.

Then, once the bar and bottleshop reopens on Thursday, they'll pass on the gifts to customers as they come in. And the couple hope other venues will jump on board and set up their own #ShoutAVicADrink option too. (We'll add details of those taking part to the bottom of this article.)

"We've got posters made," Garrity says. "We want to support other people doing it as well.

"Events help pay the bills and it's really hard to do an event now; this is like one you can do without having a whole bunch of people in the room."

Following today's announcements, all bars, pubs and cafés in Metro Melbourne are allowed to open from 11.59pm tomorrow (October 28). For now, there is a limit of 20 people indoors and 50 outside while meeting density limits and record-keeping requirements and ensuring COVIDSafe plans are in place.

The welcome news comes after the lockdown that started in early July – following a nationwide lockdown from March 23 to June 1 – succeeded in bringing daily cases down from more than 700 to zero. Whatever people's views on the steps taken by the Victorian Government, it's an achievement set to a backdrop of half a million – and rising – daily cases globally, and comes at a time when countries the world over are implementing their own curfews and lockdowns.

Garrity says they've been lucky Otter's Promise is as much shop as venue, meaning they've been able to ride out the past seven months better than many of their peers.

"We launched our website early and made it simple," she says. "The home delivery service was a success so we've just added to our business model as I think it will be here to stay."

Outside of work, however, the pandemic has impacted Canadian-born Garrity in a similar manner to many expats.

"My mum usually spends half the year in Australia and hasn't been able to make it this year," she says. "But that's how it is."

And at least today's announcement means the coupple will soon be able to reconnect with others for the first time in months.

"It will be so good just to see our people," she says. Won't it just.

Any other venues after materials and tips to create their own #ShoutAVicADrink event can hit Garrity up at info@otterspromise.com.

As part of the #keepinglocalalive campaign we've been running Postcards from the Edge stories, highlighting the ways in which people are adapting to survive. If you've got a story you think is suitable – or have something to add to the campaign resources online – get in touch.

If you'd like to shout a Victorian a drink, these breweries and venues have joined in:

If you're jumping on board, drop us a line and we'll add to the list. 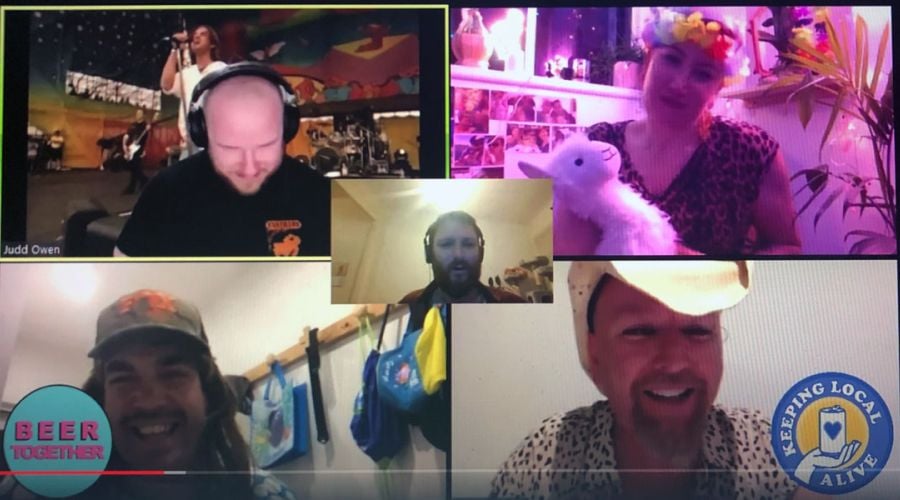 Postcards from the Edge No.22: Have A Beer Together

Plenty of beer businesses have been connecting with their fans online since venues were shutdown. And a new YouTube channel launched the day after they closed has been bringing a variety of shows to isolated beer fans too. read on The couple who brought craft beer to Dubbo put the COVID-19 lockdown to good use: taking the skills learned over ten years of homebrewing to follow through on a long-held plan to brew their own beers for their regulars. read on