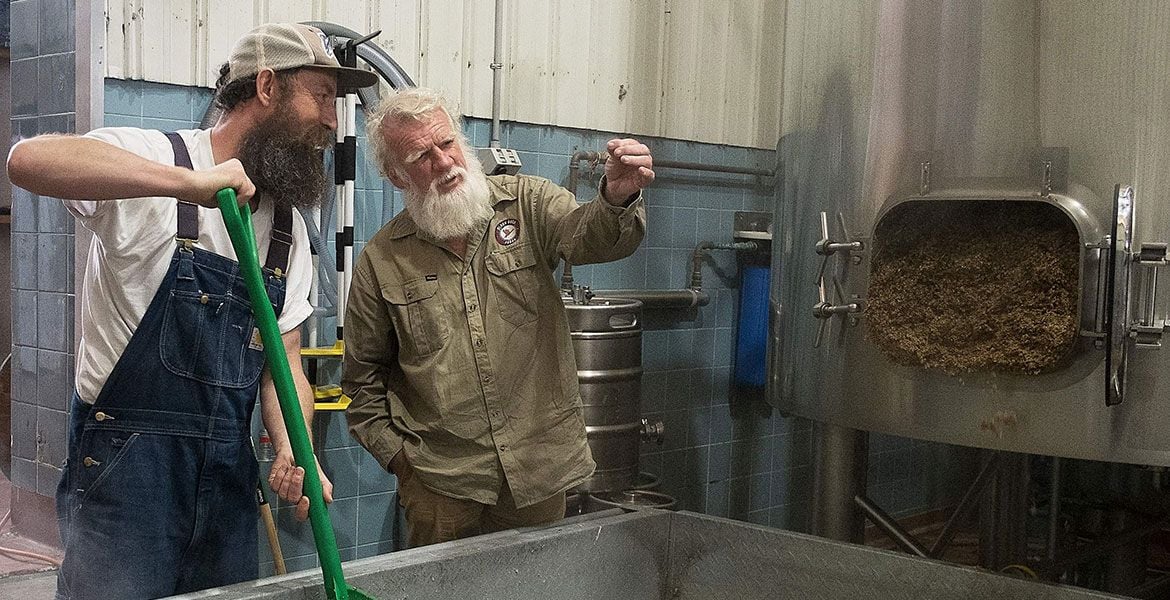 Sailors Grave have regularly collaborated with others and are often found searching their East Gippsland home for ingredients and inspiration, but the brewery’s latest collaboration really cuts to the heart of the brewery’s desire to tell stories with beer.

“It has been a really hot egg to sit on,” says brewery co-founder Gab Moore.

“We’ve been wanting to tell people about it for a really long time.”

For the past six months, Gab and husband Chris have been working with award-winning Indigenous historian and author of Dark Emu, Bruce Pascoe, to create Dark Emu ~ Dark Lager, set for release in November.

The beer is made with roasted mamadyang ngalluk and burru ngalluk; grass seeds harvested by the Yuin people on Bruce’s property near Mallacoota, a short drive from the brewery’s home in Orbost. Translated from the Yuin language of the region, the grains are known as “dancing grass” and “weeping grass” respectively.

Gab says they’ve been running tests to work out how best to use the seeds and ultimately decided to take them to a local bakery to roast them in a wood-fired oven. The native grains don’t have comparable sugar levels to barley or wheat, so the dark lager is built on a base of barley upon which Gab says the seeds add a distinct roasted or toasted note.

“We tried to find the best way of using them in a beer and we found that roasting them to extenuate the flavour worked,” she says. “When you are roasting them, the smell is absolutely intoxicating.”

For anyone who hasn’t read Dark Emu (you really should), the book uses historic sources, often from early settlers to Australia, to explore the complex agricultural practices in which Aboriginal and Torres Strait Islander people engaged. Those early settler accounts describe sophisticated practices of grain cultivation, wells and aquaculture that challenge the widely-held notion that Australia’s pre-colonial people were only hunter-gatherers.

In the later pages of the Dark Emu, Bruce discusses how modern Australians could rethink their own agricultural practices by better understanding those pre-colonial processes; it's an idea he’s put into practice on his own farm near Mallacoota. It's believed to be the first time in 200 years the crop has been used for food, as reported in this photo essay by The Guardian.

Gab says they plan to re-brew the beer when grains become available and may work with other communities to source the ingredients.

The Sailors Grave team sees the collaboration as one that tells an evolving story reflecting the seasons of Eastern Victoria: “We do want the beer to be an ongoing collaboration, something we will release whenever we have enough grains to do it.”

The beer’s artwork was created by Yuin artist Terry Hayes, who also harvested the grain used in the beer, and depicts the creator Spirit Emu Baiame. Part of the proceeds from the beer’s sales will support local Aboriginal students in Orbost, Mallacoota and Eden too.

As someone from a multigenerational farming family from East Gippsland (coincidentally Bruce taught her siblings at high school), Gab says showcasing their region has always been an important part of Sailors Grave’s story. Indeed, one of the brewery’s first releases in 2016 – the core range Down She Gose – makes use of local seaweed and salt and has been followed by myriad collaborations with local producers, typically featuring local ingredients, such as this month's Original Sin Snakebite with Gurneys Cider – a blend of beer and wild-fermented Mutsu, Sturmer Pippin and foraged apples.

Aside from their Dark Emu collaboration, Gab and Chris are also working on a new series called Jerra Ngia – Story You Story Me, with Noel and Trish Butler from Aboriginal education centre Nura Gunyu. The series of six beers is based on Aboriginal seasons and will focus on storytelling and botanical cues taken from the landscape.

Gab says these collaborations really reflect who they are at Sailors Grave, where they’re telling a story of a time, place and of people rather than simply making a commodity.

“To be able to connect on that deeper level with people from here and the land of here is really important to us,” she says.

Having met while studying to become landscape architects, reading Dark Emu caused both Moores to re-evaluate their own understanding of Australia's environment.

“We have seen the landscape in a certain way all this time,” Gab says. “It wasn’t really until we read that book that we started to see just layers upon layers of adapting landscape to how we wanted it to be. To be more European.

“It’s when you start to peel back those layers that you actually see that we have such a rich story and I feel our beers are about storytelling. Every beer that we do has some form of connection to land or to people.”

Both photos of Chris and Bruce were taken by Christopher Rimmer. Woods of the North VI at 3 Ravens

In spite of Good Beer Week's hiatus in 2022, 3 Ravens is forging ahead with its now-traditional them…

Tomorrow,
Woods of the North VI at 3 Ravens