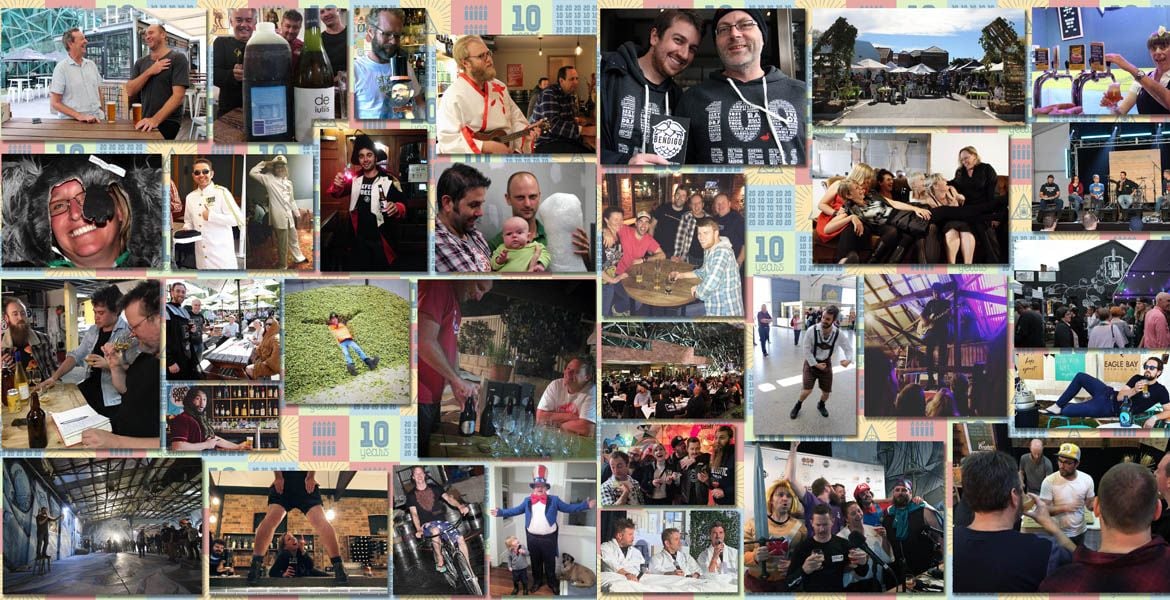 Ten Years Of Crafty: In Pictures

Ten Years Of Crafty: In Pictures

If a picture says a thousand words, then many millions have been spoken over the past decade in beer...

After kicking off our tenth anniversary coverage with a long read on the genesis of the site, today we're switching tack. We've taken a trip down Memory Lane, making our way through thousands of photos from the past decade (and wondering where the hell we've stored many more).

We've compiled them into themed montages (cos even Rocky had a montage) and will aim to share more on socials with the #tenyearsofcrafty tag as the series progresses.

We'd love to see your favourite photos and memories from the past decade too. If you share them on socials with that tag and tag The Crafty Pint – @craftypint on Instagram, @thecraftypint on Facebook and Twitter – we'd love to feature some on the site to close out this tenth anniversary coverage. We'll even give a lifetime membership to our beer club, The Crafty Cabal, to the winner too.*

So, settle in, grab a beer, and embrace the nostalgia! You should be able to zoom into the photos on phone and laptop alike.

The tenth Good Beer Week has been delayed, but here's a few happy snaps from the festival I was lucky enough to help create and, for a few years, help run as festival director.

Blind tastings – either within the team with experts from the beer world or as public events – have become a central part of what we do (pre-COVID at least). We love to encourage people to judge beers on what their senses tell them rather than on pre-conceived opinions or, these days, hype. Indeed, once we're able to again, I'd love to run a hype-themed blind tasting. For now, however, a few photos from down the years.

I couldn't think of another name for this collection, but it's one of my favourite nevertheless.

It's been a little odd over the past few months, given we've been unable to host any physical events for members of our beer club, The Crafty Cabal. The last were those that featured Otherside in Freo and Boatrocker in Brisbane on the same day, not long before the nationwide shutdown. We kick off online events next week (which will continue even once we can do physical events) and are focusing on building the offer for the new normal. In the meantime, some happy snaps from a few of the events to date...

As the beer world has grown and become busier, it's become ever harder to catch up with people, making the various awards nights around the country (pre-COVID) great chances to catch up with old mates (and make new ones). Here's a few shots from over the years.

Putting this feature together hasn't half served as a reminder of just how much the novel coronavirus has fucked everything up. But we could travel once...

While Good Beer Week devoured half of the last decade on a personal level, it's just one of the incredible array of events beer lovers have been able to enjoy around Australia over the past decade.

Collaboration brews used to be a genuine rarity; today, you see multiple released every week. We'll take a look back at the history of collabs in Australia later in the year but here's a few from the past decade.

Time for a paddlin'

As I made my way through all the photos (mine and those submitted by team members) I noticed there were a lot of tasting paddles. So why not!

The Evolution of the H100 podium

One of the more unusual occurrences of the past decade has been the way in which a fun project one countdown day to occupy my then three-year-old daughter would turn into a bout of oneupmanship with myself. This year, we even sent the podium to Sydney for the hero shot (and it's now stored in GABS' warehouse awaiting the next countdown).

Well, the plan was to include a collection of photos documenting beer and food highlights as well as trips to various hop fields and farms, but time is up. That said, we'll likely sneak some more in before this is over...

We're running a series of features looking back over the past decade of beer in Australia to mark ten years of The Crafty Pint. Tomorrow see us take a look at the growth of the industry and changes in ownership. We'll collect all the articles here.

*If an existing Cabal member wins, we'll switch them to a free membership. Competition rules are here. The beer industry today is far bigger, far better in many ways, far more colourful and far more competitive. It's also changed plenty with independence now declared with the same gusto once applied to craft. Here's a look at how. read on Ten Years Of Crafty: Beer In The Media

For most people, the idea that beer writers even exist is a hard one to conceive. Yet there's an evolving media landscape dedicated in one way or another to the beer world. Here we look at how it's changed over the years. read on Ten Years Of Crafty: Meet The Team I

We've been blessed to have some wonderful people contribute to The Crafty Pint in various ways over the past decade. Here we kick off a two-parter featuring some of them and their highlights of the past decade. read on