Novocastrians keen to enjoy some Modus Operandi's beers fresh from the tank are one step closer to that reality, with plans for the brewery's second venue approved this week. They're set to take up residence in an old panel beaters in the Newcastle suburb of Merewether – some way north of Modus' original Northern Beaches home but in a part of the world that holds an important place in the brewery's story.

Jaz Wearin, who founded the brewery 2014 along with husband Grant, says they've been searching for a second home for years, with their Mona Vale home having well and truly reached capacity.

"If anyone has been to the Modus brewery you would have seen that we are seriously squeezed," Jaz says, adding that it's been worth the wait to find the site.

"This site is magical," she says. "Enough space for a serious production facility, a beautiful north facing aspect so you can drink a fresh beer in the sun, great bones that give the site some real authenticity and a flat stroll from the sparkling beaches of Newcastle and some awesome neighbourhood pubs."

Jaz says though expansion into Newcastle has primarily been driven by needing to grow to meet demand for their very many award-winning beers, Modus Merewether is being built with locals in mind too.

"[It'll be] quite the transformation from the car panel beating and painting it was," Jaz says. "Expect an internal courtyard that will knock your socks off with lots of natural light and established coastal landscapes, nine metre sliding doors opening into the brewery, nine metre long rammed earth bar with over thirty taps."

Jaz says the space will also feature an "out-of-this-world" kids area and innovative menu, while the brewery will have sustainability front-and-centre, operating with 100 percent green energy. As a business, she says they've always being conscious of their impact on the environment and among the many green aspects of the operation will be the use of carbon-heavy soil from bushfire-ravaged regions.

"Our awesome architect, a born Novocastrian, is a lecturer at Sydney Uni in architectural sustainability and really thinks outside the box down to the minute detail," Jaz says.

"Recycled plastic fabrics and tiles, earthen floors and walls from bushfire ravaged land removing their heavy carbon soil, water capturing in every nook and cranny, use of natural light and some serious solar - the list is extensive."

Jaz says they were in part drawn to Newcastle as a new home by their love for the city and its dining and drinking scene, but their connection to the region goes back to Modus' inception.

"Originally Modus was going to start its roots in Newcastle but the magic site didn’t make itself apparent and the Modus brewery in Mona Vale was the winner," she explains.

"Grant's family is actually from Newcastle. His grandfather owned the corner store down the road from the new site so that's a bit special."

And, though coronavirus continues to challenge the hospitality industry across the country, having a space where people can enjoy Modus beers next to where they're brewed was always going to be a big part of the new home.

"[It's] important for us the have a public space where people can experience the magic of a working brewery," Jaz says.

"Fortunately, the public space is large in its nature so should the current restrictions be in place upon opening, we will be able to be a COVID-safe venue. We could never give up on our pubic offering, even if it is reduced in these times, because it's an important part of the Modus fabric."

As for any future plans beyond the opening of their new home, Jaz and Grant are staying tight-lipped.

"I cant believe you are asking that at the start of a ginormous build!" Jaz says. 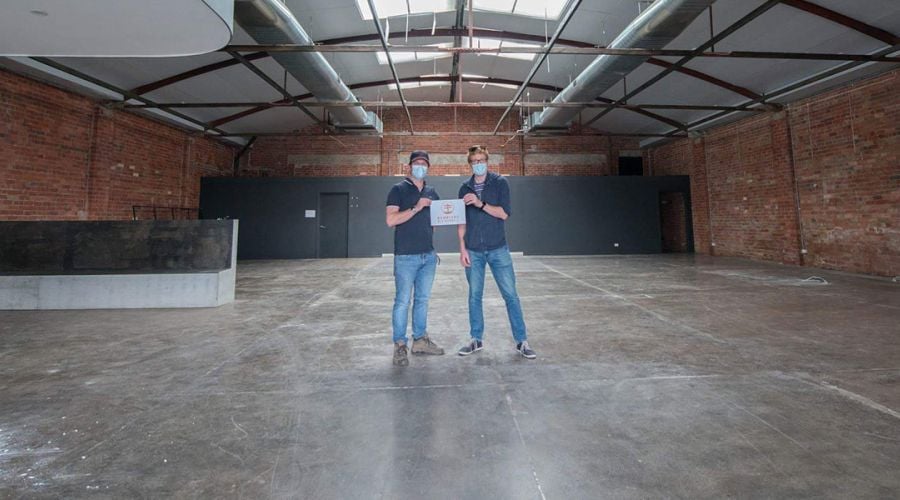 Ramblers Bring Brewing Back To Hawthorn

Hawthorn is a Melbourne suburb that boasts an early claim to craft beer but in recent years it hasn't seen the same spread of local breweries compared to many other inner-city neighbourhoods. Ramblers Ale Works are set to change that when they open the doors next month and we caught up with the two Bens behind the brewery to find out more. read on