“Imagine this: you walk into a brewery. You’ve got an empty keg in your hand. You’ve never been in this brewery before, but the guy behind the bar says, 'Hey Mick! Good to see ya. I’ll go get your keg.' because they can see on their app that Mick’s going to come down and get an XPA on Thursday around five o’clock, and they have it all geared up for you.

"So you walk in there with an empty keg – don’t have to bring out your credit card or anything like that – have a nice chat with the brewer, grab your keg [of XPA] and walk back out. Then you can go share it with your mates – or selfishly drink it in the quiet of your garage!”

The new business is the brainchild of Ash Freedman and Johnny Tiller, two beer lovers from Sydney’s Northern Beaches. Though they live within a few kilometres of each other, they met at a campsite outside Perth when they were each on caravanning holidays in 2019. Their families spent the day together, Ash and Johnny shared beers and life stories by the campfire, then they went their own way.

But fate (and the nature of caravanning) brought them together again and again at different campsites over the next few weeks. Over numerous beers and late night chats, they realised a few things on their shared journey.

The first is that even though cans and bottles are recyclable the amount of waste they produce still adds up.

“You’d wake up in the morning after a night on the booze and you're stuck with a big bag that you had to put in the car,” Johnny says.

Ash adds: “When you have to take all your own waste with you, it becomes a lot more obvious than when you're chucking it in your own bin at home.”

While trying to come up with a more sustainable solution, the pair discussed 19 litre Cornelius kegs, the preferred option of homebrewers and those with a draft beer system at home. But since Corny kegs don’t connect to the keg washing equipment in commercial breweries, they can present problems.

Ash, who’s one of the co-founders of 7th Day Brewery in Brookvale, says: “From a small brewery’s point of view, [filling Corny kegs] is very difficult to do. Most of the brewers I know don’t want to touch other people’s kegs. You don’t know what’s gone in there, and how clean it is, and just filling it is a problem.”

It’s here that they had their second realisation: Corny kegs, the best option currently available, weren’t the answer they were looking for. There had to be a better solution.

Meanwhile, in between campsites and conversations, Johnny and Ash had both been using Swap’n’Go gas bottles for their camping stoves. In time, this became the catalyst for their third realisation, which was more of a "Eureka!" moment: what if you could do swap and go with kegs of beer?

“It seemed like such an obvious thing to do,” Ash says. “Why is no one else doing it?”

Over the next 12 months, the pair continued the conversation and workshopped the business plan. The arrival of COVID-19 and the ensuing lockdowns cemented the need for people to have good beer at home, and a sustainability grant from Food Innovation Australia helped make the financial side possible. The pair lined up 20L commercial kegs with couplers that breweries can connect to their existing equipment, and got a first wave of breweries on board from Sydney and the Northern Beaches.

Thus, KegSwappa was born: an online marketplace where punters can find and buy kegs of beer from participating breweries.

The buying process is straightforward. Customers search by suburb or by brewery, and add breweries to their Brew Crew. This sets up a quick, customised way to find out what beers are available in their area at any given time, since each brewery decides whether they’ll only offer regular core range beers or include special release kegs as well. Once that’s set up, all the customer has to do is select a beer, order it and pay online, and organise a time to go to the brewery to swap out an empty keg for the full one. Simple.

For Ash and Johnny, the original value proposition – a more sustainable way to drink beer at home – remains at the forefront for KegSwappa.

“Sustainability’s obviously a big part of the brewing community,” Johnny says. “Everybody’s said we want to reduce waste, and the government’s keen for us to do that, and we’re getting support from the breweries.

"The packaging process includes glass bottles, aluminium cans, labels, four-pack and six-pack holders, and boxes, and while a certain amount of these materials can be recycled, reusing [kegs] generally causes less environmental impact even than recycling. Each 20 litre keg holds as much beer as 53 [375ml] cans, removing just over two cartons’ worth of packaging from the equation.

“We’re going to get a professional to go through and assess the footprint of our different solutions versus buying bottles and cans, then we’ll be able to say with some integrity how much of a better step forward this is from an environmental perspective.

“But, at the very least, we’ve signed up to do one-for-one keg for tree. For every keg that gets sold, we’ll be planting a tree.”

On top of sustainability, they see a few other benefits in the KegSwappa model. The reduction in packaging costs, labour and excise leads to a lower cost product – in other words, increased revenue for local breweries, and cheaper beer for consumers. And, by picking up kegs fresh from the brewery, the punter gets to drink beer that’s avoided packaging, storage and distribution, which all increase the chance of the beer quality being affected by oxygen, heat and light.

“If you’re a tightarse like me, or you like the environment like me, or maybe you’re like Ash who wants to drink beer at its best, or somebody who wants to support a local business, then there’s gonna be a value prop there.

“You’re gonna get better beer at a cheaper price, helping your local, and helping the environment. The biggest challenge is getting it past the keeper, and making sure your other half is happy with you to spend the money!”

In saying this, Johnny isn’t referring to the cost of the beer itself – which should be cheaper by volume than packaged beer – but to the costs of the gear for the initial setup. Customers need to purchase a 20L keg before their first swap, and then may require gear depending on their needs and what stage they’re at.

To streamline the setup for new customers, KegSwappa are offering four different levels of gear: for the homebrewer who already has everything, they’ll provide an A-type coupler; for someone who wants the basics for pouring beer from a keg in the fridge, the setup includes a hose, regulator and connectors (BYO soda stream gas); for handy DIY folk who want to build a tap system, the setup includes a tap and CO2 bottle; and, finally, for someone who wants to go the whole hog and install a high end kegerator draft system in their home, KegSwappa will facilitate that. They also have a support page on their website with FAQs and videos.

“At the moment it’s so easy to go to a bottleshop and buy a case – it’s got lots of waste and cost associated with it – and then throw it out, and never think twice. This definitely requires a bit more effort, so we’ve got to make it as absolutely simple and possible.”

Check out KegSwappa's website here. For their soft launch on Friday, July 24, KegSwappa will be starting with six Sydney breweries on board: 7th Day, Quakers Hat, Trust Tree, and Dad & Dave’s will be available on the Northern Beaches, while Young Henrys and Wayward will be repping Sydney’s Inner West. 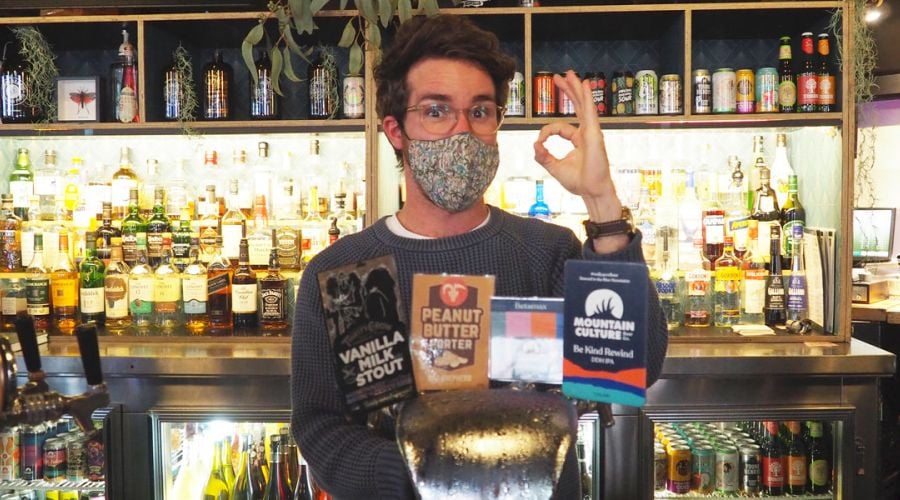 Many businesses across Sydney and New South Wales opened to customers for the first time in more than three months yesterday. Two members of The Crafty Pint team were among those heading back to the bar. read on