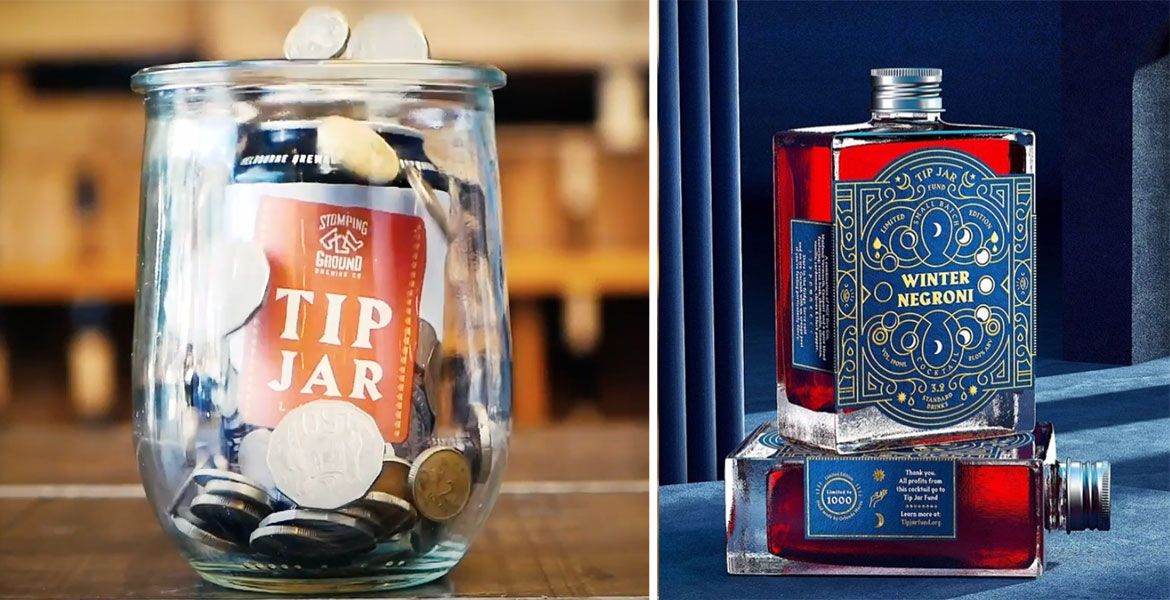 Anyone involved in hospitality is doing it tough right now. But if you're a venue owner or work in hospo in Melbourne and parts of Victoria, it's fair to say tough is an understatement.

The imposition of a second lockdown – one that may yet get harsher still – has set the industry back, with those who'd invested in reopening only to close their doors again within days particularly hard hit. But among those offering a helping hand are the people behind Tip Jar, a fund launched to support hospitality workers impacted by COVID-19.

It's the brainchild of the team at Worksmith, a multifaceted Melbourne-based operation that combines co-working space with events and other resources designed to help the local hospo industry grow and innovate. And, since Lockdown Mk II was imposed, they've been ramping up their fundraising efforts, including the launch of a Tip Jar beer in conjunction with Stomping Ground and a Winter Negroni.

The goal is to raise $1,000,000 to be distributed via partners such as COVID-19 EAD, who we wrote about earlier in the series, StreetSmart, Scarf and Operation Thank You FrontLine Meals.

"It was first and foremost created to fund a lot of initiatives that were born out of or for the hospitality industry," says Worksmith's Michael Bascetta, who is also a co-owner of Bar Liberty and Capitano.

"I co-own venues and it's quite difficult to be operating for a short space of time then shut down again. Venues were gearing up to reopen and lockdown has decimated that; there are venues that were set to open [for the first time] that were a long time coming and it's pretty devastating."

Of the move into fundraising via the sale of Tip Jar drinks, he says: "We're going pretty headstrong into the product space and see it as an ongoing thing post-COVID; unfortunately, there's always an issue to be solved."

Stomping Ground have been supporters of Worksmith for years, with the idea to brew a beer coming out of conversations with brewery co-founder Guy Greenstone. They've brewed a New World lager – a 4.5 percent ABV easy-drinker with Ekuanot and Motueka hops – for the cost of materials, donating their time and other costs in order to maximise profits for Tip Jar.

The first run of around 150 cases, available in Metro Melbourne BWS stores, Blackhearts & Sparrows stores and via Stomping Ground's online store, is set to be followed by a larger second batch. As for the cocktails, they're being mixed by out of work bartenders, who are being paid for their work on the project.

"Worksmith presented themselves as real leaders when this first hit," Guy says. "They created a really good resource  hub for hospitality workers across the board. We just thought they were outstanding leaders in a difficult situation.

"When they asked if we wanted to do something we didn't even think twice about it."

Had COVID-19 not hit, Stomping Ground would be two days from opening their third brewpub in Moorabbin. But, with that project on hold since March, they've instead focused on remodelling their own business until things return to some form of normal.

Guy says they're planning a second production run of the Tip Jar lager "ten times" the size of the first, which would help raise tens of thousands towards the million dollar target.

"We want to make a significant contribution to the cause," Guy says. "It's such a brilliant cause."

As well as fundraising drives such as the Tip Jar beer and cocktail, people can make direct donations and go into the running to win prizes, including a year of beer from Wild Fire, $1,000 and $500 dining vouchers, a cocktail masterclass and more.

Worksmith also launched a COVID-19 Relief Grant, which will see five hospo workers each receive $1,000 "to help them get back on their feet". Submissions were due to close today (July 17) but they've been extended by another fortnight.

Looking ahead, Michael says, "people are just rolling with the punches" but adds the current situation means "it's half a step forward and three steps back".

"With producers, especially the fairly savvy ones, they've got online stores and can focus on delivery direct; retail was still really strong [through the first lockdown]. From the venue side, it's a scary time.

"Pre-COVID, there was already a correction coming and this is now an over-correction. Everyone I speak to expects to see at least 15 to 20 percent of venues not reopen. A lot of people are propped up by JobKeeper and landlord relief; they have a false sense of security. Once it ends, we will be in an environment where I can't see imagine getting back to pre-COVID-19 numbers.

"On the plus side, there's some really cool things going on. Out of work chefs are creating their own products and doing takeaway and it's really refreshing to see – a bit of hope and innovation.

"I really think we will see some incredible things come out of it from a venue and venue product perspective. Now we have seen what we can do under pressure there's things that we will never do the same. The venues that come out the other side will come out very strong. Venues are being seen more as a brand and this sort of thing will keep going.

"It will kickstart the next style of business model for venues."

You can find out more about Tip Jar and how to get involved or donate here. Many venues in Victoria opened for the first time in 70 days today as restrictions elsewhere were eased further. Yet any celebrations will be tempered by the fact the road to recovery remains long and many won't make it to the end. read on A Year On The COVID Roller-Coaster – Part II

Following on from our look at the impact of COVID-19 on the brewing industry, we switch our focus to hospo, retail and beer lovers – one year on from the day the country was closed for business. read on

Tomorrow,
Shiploads of Beer at The Wheaty