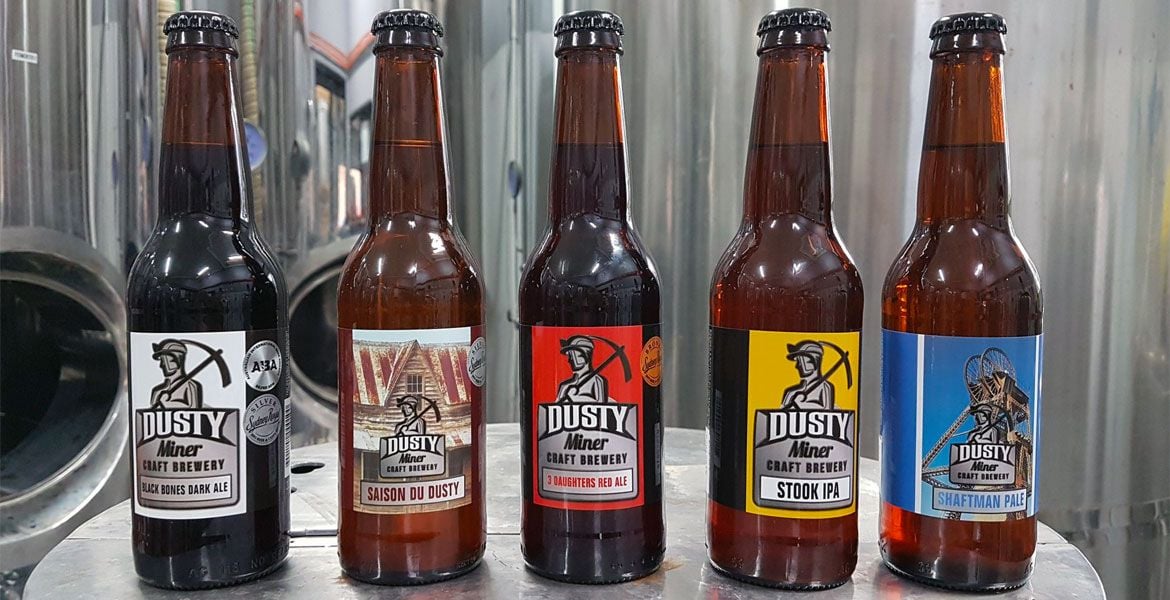 It is MacDuff that suspects Macbeth of regicide, eventually killing Shakespeare’s ambitious king slayer in the final act, saving Scotland from the mad tyrant.

Duff, the Thane of Fife (upon whom MacDuff is based) is an ancestor of Dusty Miner’s owner and head brewer, Stuart Duff. So, you would be forgiven for believing this modern-day MacDuff uttered these words when he first tasted European beers: “O horror, horror, horror! Tongue nor heart cannot conceive nor name thee!”

Stuart had been handed a glass of Hoegaarden by a mate in his hometown of Mudgee and, being a VB drinker, was not a fan.

“Then I found some ales from Mountain Goat and Little Creatures and at first it was, ‘Nah,’ then the second bottle it was ‘Yeah, I can enjoy this,” Stuart says.

This set the mining underground fitter off on his 20-year brewing journey, culminating in a award-winning, one-man brewery which has added considerable clout to the brews coming out of the Hunter.

As a child he had watched – and helped – his mum work with homebrew kits so, when it came to brewing as a young bloke out in Mudgee he was ahead of the game.

“I started to homebrew, adding hops and this and that to get the flavours I wanted," Stuart says. "Then I went on to all-grain brewing.”

It was around 2006 that Stuart came across two other brewing enthusiasts in the Hunter Valley and between the three of them they would eventually become multi-awarded brewers; not that they knew this at the time.

Stuart would head into Newcastle to the local homebrew shop and spend hours chatting to a young chemistry student from Newcastle Uni called Keith about all things beer. If he had a problem, Keith would help. When Keith couldn’t help Stuart, he put him in touch with his mate Gough.

“So, I went around to his house and said, ‘Are you Gough?’ and he replied, 'Keith sent you didn’t he?',” Stuart says.

Gough was also a student at Newcastle University, researching labour and social history, and was fast becoming known as a dab hand with homebrews.

Between the three of them, they helped each other out when the other was stuck, discussed brewing ideas, techniques and the art of creating beer masterpieces.

These days you'll find Keith Grice at his brewery in Pokolbin – Hunter Beer Co –  and Shawn "Gough" Sherlock at FogHorn Brewery in Newcastle, where he's co-owner and head brewer.

As Stuart became more obsessed with crafting the perfect beer, he pitched the idea of building a nanobrewery to his wife, Cath. She told him that merely brewing beers, which his mates said were brilliant, wasn’t really the foundation for an investment in a brewery. So he took kegs down to the Newcastle brew shop and left them with forms for feedback.

He then took his version of a pale ale to The Pourhouse in Maitland, where staff provided him with feedback saying they didn’t like it as it was too bitter. Stuart promptly tinkered with the original recipe, cutting back on the hops that suited his taste buds and The Pourhouse promptly put it on their taps.

With quality feedback also coming in from the Newcastle brew shop, Cath was finally convinced they would take the plunge: “He got me at a weak moment; I said put the prices together and show me what you’ve got. I was flat out at the time, but I knew he could put out a good product.”

Cath describes herself as regimented, needing details and everything done by the book, while Stuart “has it all rolling around in his head.” Together they work well, with Cath balancing the books every month and Stuart focusing on the beers.

Cath helps provide quality control, pointing out that Stuart initially wanted to brew beers that he liked, while she knew not everyone would appreciate some of his more "out there" styles. In fact, the beers that have picked up awards to date are not his favourite styles, something with which Keith likes to rib his mate.

For all that, Stuart says he loves brewing and enjoys the festival scene; at a recent food festival Dusty Miner and Smokin’ Hot n Saucy, a popular Texas style BBQ food outlet in Newcastle, put together a collab that proved an outstanding success – and was a style he really enjoyed.

“People loved it," Stuart says. "It was based on a Shiner Bock from Texas: a single batch, amber beer.”

Another resounding winner has been the Bitter Black & Twisted beer he brews for the Bitter & Twisted festival in Maitland gaol: a black beer, with a rye malt base, fermented on bourbon chips.

Stuart’s flagship, however, is his Black Bones Dark Ale, which picked up silvers at the 2018 Indies, the 2016 Australian International Beer Awards and the 2015 Sydney Royal Beer & Cider Show. At the moment, his Saison Du Dusty – another fan favourite – is hugging the interior of a Hungarian oak barrel, which had previously housed white wine. The plan is to let it age for a little longer before he bottles it, as fans on social media await its unveiling.

Cath and Stuart have been investing in upgrading their three hectolitre brewery and hope to see Dusty Miner with a bar-come-bottleshop where customers can enjoy tastings and also purchase both their beers and those from other independent brewers.

“It would be a huge asset that Maitland does not have,” Cath says.

As for Stuart, he says: “I brew to please other people.”

It's a far cry from his ancestor’s tyrannical nemesis Macbeth: “Drink sir, is a great provoker of three things… nose painting, sleep and urine. Lechery, sir, it provokes, and unprovokes; it provokes the desire but takes away the performance.”

One thing is for certain, however: you cannot take away the performance of this one-man brewery hidden away in the Hunter Valley.