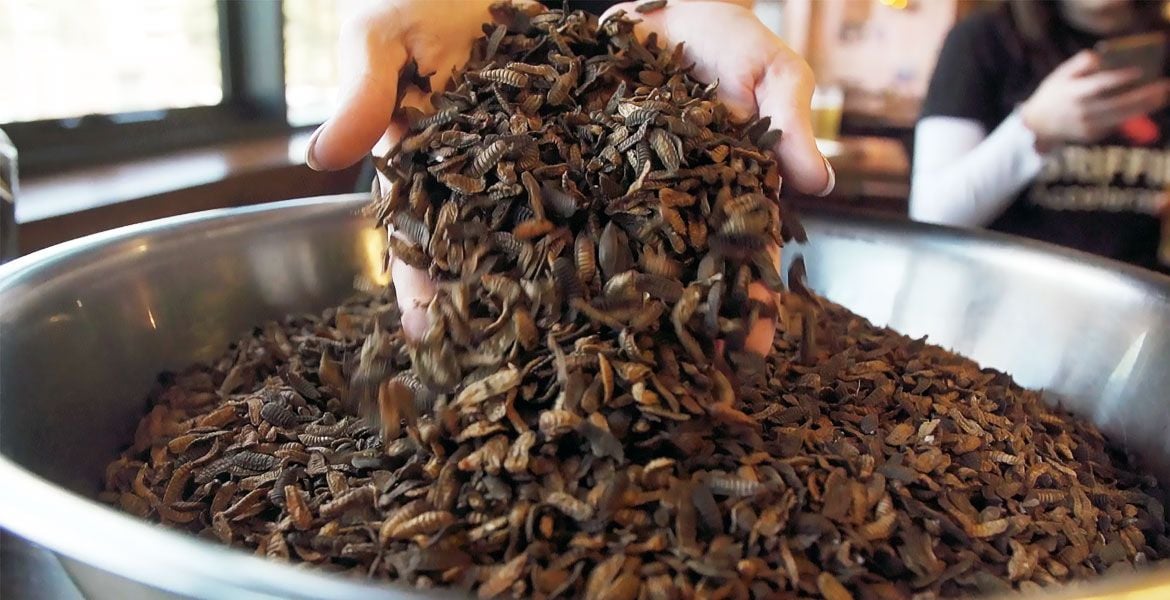 “We sat around the table and had a chat about a collaboration beer,” says Richard Watkins, co-owner and head brewer at BentSpoke. “They had a lot of startups they supported over the previous 12 months, and I wanted to incorporate as many of those startups into making the beer as possible.”

The out-of-the-box ingredients for the beer – aptly named The Innovator – came from entrepreneurs and researchers from various fields. The ANU Research School of Biology collected and cultivated a natural yeast found only in the local area. The hangover relief drink came from the Prepear Drink Company. And the cricket powder and dried larvae came from startups Future Superfoods and Goterra respectively.

“We were going to try to use a laser as well to change the colour of the beer… but we didn’t get that done,” he says.

The crickets and larvae - clearly the most startling of the ingredients – were included to explore the possibilities of using more environmentally sustainable ingredients in brewing.

“As we know, sustainability’s big on everyone’s list at the moment due to climate change,” Richard says. “Who knows what we’re going to be eating and drinking in the future?”

The insects were used in the mash, their naturally occurring starches converted to sugars to reduce the amount of barley malt needed in the beer by around twenty percent. And in case you’re wondering: yes, they also contributed to the flavour of the beer.

“The protein’s given us this great nutty flavour and character, which is going to be the signature of the beer,” Richard says. “I’d eaten crickets before and knew they were quite a nutty character. So we made an easy-going pale ale, showcasing the crickets and larvae as much as we could.

This isn’t the first time an Aussie brewery has put weird ingredients into a beer: Bacchus Brewing in Brisbane have made a beer infused with a whole chicken carcass, Melbourne’s 7 Cent Brewery once fermented a GABS beer with yeast from the brewers’ belly buttons, while Robetown Brewery in SA created another festival beer with whale vomit.

In fact, this isn't even the first time crickets have made their way into a beer, with SA's Shifty Lizard Brewing including ground crickets in their 2018 GABS beer. But The Innovator is arguably the first beer to use seemingly outrageous ingredients in the pursuit of sustainability. (Although, to be fair, belly button yeast is incredibly sustainable.)

Petr Adamek, CEO of CIN, says: “The Canberra Innovation Network links science and research with businesses and entrepreneurs… At this year’s Innovation Showcase the attendees will be able to ‘taste’ what we are all about.”

If you’re keen to try The Innovator (which this writer will forever refer to as “the insect beer”) and see what all the buzz is about, it’ll be launched at CIN’s 2019 Innovation Showcase on December 4 at the BentSpoke Cannery in Mitchell.

You can buy tickets for $5 from Eventbrite, with all proceeds going to Hands Across Canberra. The Innovator will go on tap at BentSpoke’s brewpub in Braddon after December 4.

The Collaborators is our series shining a spotlight on businesses working alongside the craft beer industry. Here, we chat to the Melbourne manufacturers of an innovative new one-way keg called Kegasaurus. read on