Close to a year ago, equity crowdfunding became available for proprietary limited companies in Australia – that is, businesses with a limited number of shareholders. You can read about it in our feature on the financing of brewing companies here.

Since then, a number of breweries have turned to fans to raise money for their capital hungry businesses. Endeavour were the first, using crowdfunding platform Equitise to raise more than half a million dollars from nearly 600 people. Gold Coast brewery Black Hops took just six days to raise their targeted $400,000 via Birchal's platform.

Those two breweries have since been joined by the likes of Dainton, Bucket Boys and, most recently, the craft beer pioneers at Holgate who turn 20 this month.

Each business is different but all share one common factor: they're found on Australia’s East Coast. Despite the growing number of breweries throughout Western Australia and South Australia, none of them have looked to raise money through equity crowdfunding yet. And there’s a good reason: they can’t.

Birchal co-founder Matt Vitale (pictured above speaking at a brewers conference) says the liquor licensing regimes in both states prevent any liquor business from taking part in equity crowdfunding in the same way breweries in the eastern states can. Each Australian state and territory employs an “associate” concept in regard to liquor licensing, with those who are in a position of authority over a liquor license defined differently in each state.

“When we first started talking to Western Australian brewers, we started thinking there might be a problem,” Matt says. “And then, looking into it, we realised that the way the law is in Western Australia and South Australia [means] that we couldn’t let anyone make an offer as a proprietary limited company.”

Though there are nuances to the liquor legislation in each state, for any proprietary limited alcohol company WA and SA guidelines define a person in “position of authority” over a business as being any shareholder.

To become a shareholder in a booze company in WA, for example, you need to gain approval from the Department of Racing, Gaming and Liquor and, to be eligible, a few criteria need to be met. You need to be an adult, not have an undischarged bankruptcy and you need to be a “fit and proper person”.

You also have to submit the right forms and pay the right fees for your application. The fees aren't astronomical per person but according to Birchal, if the Black Hops equity campaign took place in Margaret River rather than on the Gold Coast, the total fees paid would have totalled more than $88,000.

In both SA and WA, if you were to assume a position of authority over a brewery by buying a skerrick of a share under equity crowdfunding, you’d have committed an offence.

So, why is it like this? After all, laws play an important role in stopping the wrong kind of people making money from alcohol or gambling.

“The reason for the association concept is to protect the integrity of the licensing regime,” Matt says, pointing out that nobody wants an outlaw motorcycle gang funding its activities through a pub.

“That’s the fundamental principle that underlies these features of the legislation, but the other states do it in a different way.”

By comparison, in Victoria, New South Wales, ACT and Tasmania, legislators are only interested in the owners of proprietary companies if they could have significant control over a liquor business. Matt says that, while historically you could argue any shareholder in a small business exerted significant control, equity crowdfunding has changed the game, allowing hundreds of people to own small shares in companies.

“It was an undisputed fact for many years – until the crowdfunding laws were passed – that proprietary limited companies are closely held,” he says, adding that equity crowdfunding has been shown to only allow ownership of small amounts of the business.

“What I would say is that we’ve completed 22 offers under the regime now and they’re always a minority holding that’s offered; it’s rarely more than 20 percent of available capital that’s offered. So, you really aren’t getting people that you could say would be able to exert significant control over a company through crowdsourced shares.”

Importantly, it’s not just brewers affected but any booze company; a crowdfunding campaign like the one Birchal launched for the Speakeasy Group – the hospitality company that owns owns Eau De Vie, Boilermaker House and Mjølner – wouldn’t be possible much further west than Casterton, the Victorian town that’s the birthplace of the Kelpie.

And, while there aren’t any breweries marching on the gates of state parliaments demanding change, Matt says they’ve had at least half a dozen breweries or distilleries in the affected states express a strong interest in crowdfunding.

“I believe this is stifling the brewers considering using this space and that’s obvious because it’s only been east coast brewers that have launched crowdfunding offers,” he says. “People don’t get through to the next step; there’s a lot of interest but when we say, ‘We can’t do this unless the state legislation changes,’ they go, ‘Well, let’s not worry about it.'.”

One WA-based operation that has considered equity crowdfunding as an option is Otherside Brewing Co, although Al Taylor – CEO of the hospitality business Triple-1-Three that has sprung up around Otherside – says it’s not the kind of path they’re looking to follow right now. That said, he does see an issue with the current legislation.

"Equity crowdfunding is an appealing way to raise money and we have certainly considered it as an option. But at this stage it isn’t the right option for us," he says, pointing out that they're "fortunate to have a group of very engaged, highly supportive investors that are very much on the journey with us.

“What’s perhaps more of an issue for us is that our business is broader than brewing. In addition to Otherside, we have other brands and business that we want to develop and can see that equity crowdfunding could be worth pursuing to support those. However, licensing impediments that would apply to one aspect of our business make it a non-viable option for the business more generally.

"It just adds another layer of challenge for us to compete nationally, which is not ideal.”

Matt says equity crowdfunding is a big decision for breweries and they weigh up a lot of different pros and cons before going down that path. And, without change, it's one brewery owners in WA and SA are unlikely to follow.

“It’s a bit of an oversight that I think makes it more problematic to make a change. There’s a lot of important stuff governments need to do so we’re trying to figure out how to get their attention,” he says.

“We are starting this process now but we really want a brewer to partner with us to lobby the government for this change.”

For more on the issue, you can read a post by Matt Vitale here. 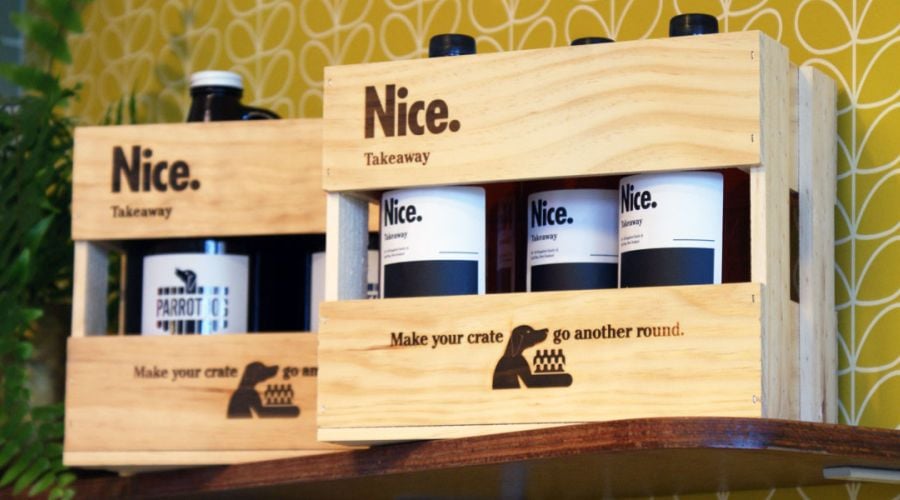 Our Man In NZ: ParrotDog Surfs On

From brewing in a toilet to trophy-winning rising stars of the New Zealand brewing industry, it's been quite the ride for the three Matts behind ParrotDog. Jono Galuszka joins them as they settle into their impressive new Lyall Bay home. read on

The Big Issue: Crowdfunding Pt I

Crowdfunding has become increasingly popular among both new and existing beer businesses. In the first of a two-part series, Will Ziebell speaks to crowdfunding platform Pozible and a brewery that has run a successful campaign. read on Just six days after opening their equity crowdfunding campaign to the public, Black Hops​ have reached their maximum fundraising target of $400,000 – and broken a few records in the process. read on