We haven’t checked, but this could well be the biggest and busiest monthly update to date on all things from The Crafty Cabal, our beer lovers bonus scheme. There’s plenty lying ahead – this week and beyond – but also a fair bit to recap from the weeks since our last roundup.

In the latter category, thanks to Liam and the crew at Small Batch, the new microbrewery setup from Batch Brewing Co attached to Public House Petersham. They welcomed 20 Cabal members for a preview tour and tasting of the venue before it opened to the public (pictured above). You can read all about their plans for the space here and look out for a full listing in our directory soon too.

Thanks also to Frenchies, who invited Cabal members to join them for a free preview tasting of the first beer from their barrel program, the delightful sour red La Boussole.

As for what else is new and lies ahead…

With Crafty Pint founder James Smith in WA to coincide with Perth Craft Beer Fest (where you can join him and the Beer Sucks crew for a third Crafty Sucks live podcast on the Saturday arvo), we’ve set up an intimate Brewers Brunch for Cabal members at Bright Tank in East Perth.

There’s a few spots left for any members who’d like to join us for a deep dive into the story of the brewpub, a chance to explore the owners’ passion for beer and food pairing, and also to meet new head brewer Jackson Purser. More details here – or head to your member’s area to book. Please be quick so we can confirm final numbers with the venue!

The Indies is an awards night celebrating the best of independent beer in Australia that closes out BrewCon 2019. It takes place on September 5 at Showtime Events, in Melbourne's South Wharf precinct, and will see a stack of awards handed out by the Independent Brewers Association to the best and brightest on the scene today.

Tickets to the evening include food and access to four bars plus a gin bar – and we’ve been given a special discount for Cabal members. If you’d like to join the indie brewing industry for their big night, check out the offer in your member’s area to save $25.

We’re also in the final stages of locking in another Meet The Indie Champs event the night before. We’ll be hosting the three champion brewers from 2018 – Moffat Beach, Boatrocker and Modus Operandi – for a meet the brewers with a difference. All three are family-run businesses so we’ve invited the husband and wife from all three to join us onstage rather than leaving the men to hog the limelight.

Tickets for the event upstairs at Beer DeLuxe fed Square will be on sale very soon and there will, of course, be a discount for Cabal members.

The team at Aether are on the home straight for the opening of their second site in Northgate. They’re due to open Aether HQ – a production brewery and venue – at the end of September, but Cabal members can join us for an exclusive sneak peek on September 18.

If you’d like to see inside and hear all about their plans – while sampling beers, of course – there’s more info here. Or you can head straight to your member’s area to book a spot.

We’ve got a couple of festival related giveaways on the go right now. One features the forthcoming Beer InCider in Brisbane, for which we’ve lined up a stack of weekend double passes. Existing Cabalistas can enter a ballot to win one via their member’s area, while there’s still a couple left as signup bonuses for new members – you’ll find instructions on how to get hold of them here.

Then there’s the Tamworth Brewfest in November. We’ve got VIP passes worth $90 to giveaway. Again, existing members can head to their member’s area to enter the ballot and there’s one available as a signup bonus here too.

Congrats to the winners of mixed cases of beer from Temple in the beer ballot that’s just closed. They are Andy Carlisle, Daniel Kaiser, Michael Colman and Gisela Versiani (whose case will be personally dropped off after making its way in the luggage of Virgin flight VA677 this week!).

We launched another one straight away, this time featuring no less than six cases of the new Pale from Hawkers (whose new look you can read about here). Members can head to their member’s area to enter the ballot with winners drawn early next month.

Coming next will be a bumper pack from WA’s much-loved Rocky Ridge.

We’ll confirm an event in Adelaide soon and may be able to free up some more spots for Burnley Brewing’s Oktoberfest preview too. We’ll also be seeing a fair few members at our IPA blind tastings at Bendigo On The Hop. There has been a change of venue for that, but we’ll send details to all attendees in plenty of time.

Aside from that, there’s been a few new ongoing offers added to the list since our last update:

If you're still wondering what The Crafty Cabal is, it's perhaps best described as similar to the subscription services run by community radio stations. You can access everything we do at The Crafty Pint free of charge but if you want to support us in our good beer mission you can by signing up.

In return for your hard-earned, you get deals and freebies at venues across Australia, invites to exclusive events, entry into heaps of awesome competitions with prizes worth tens of thousands every year and more. 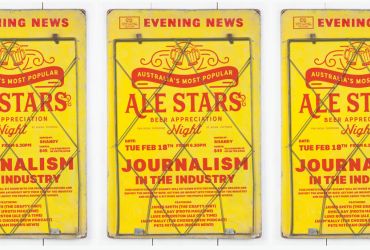