It might be the most overused – and gendered – adage but dogs, they say, are a man's best friend. Given their tendency to pop up on beers – from Black Dog Brewery's (now departed) Macca to Moon Dog's recent foray into doggy-dedicated IPAs or Rocky Ridge's brewpups – they might well be a brewer's best friend too.

Certainly, that's the case for the couple behind Hoppy Puppy Brewco, Jacob Landers and Kate Fitzgerald, who took inspiration from their five-year-old black Labrador, Darcy, when naming their brewery and deciding upon their branding.

The weekend just gone saw the couple's first beer, a Red IPA, start to land in bars in their hometown of Brisbane, the first of what the gypsy brewers hope will be many batches of their beers. The Red IPA will be joined by the likes of a chocolate stout (which sounds particularly Darcy-inspired), a saison, an IPA and a pale.

So, getting in early, here's the Hoppy Puppy team to tell us more as part of our ongoing Who Brews...? series.

Jacob Landers and Kate Fitzgerald – the husband and wife team behind Hoppy Puppy Brew Co. Jacob’s background is in civil engineering and Kate’s is in chemistry and the nuclear medicine industry.

We began homebrewing during our time at university, for the love of cheap beer, and we’ve spent the last ten years developing a range of hop forward recipes to indulge our evolving taste in beer. Now we brew for the love of good beer!

For the love of good beer!

It has been more of a natural evolution from brewing cheap beer in a sharehouse at uni, to a hobby shared with friends, through to a brewing obsession, aiming to achieve the best possible taste, and now finally being in a position to share our beer with the rest of the community.

Beer and dogs, in particular our chocolate Labrador and apprentice brewer, Darcy. Darcy loves brewday. Like, seriously loves it.

When he sees the equipment being prepared, he jumps four feet in the air with excitement. Who knows, perhaps he’s just in it for the spent grain...?

Our Red IPA is a beer that we keep coming back to. It showcases the hop forward characteristics that we would like to be known for, but remains balanced and easy-drinking.

It’s “cold” in Brissy at the moment, so All Inn’s Midnight Jackal, Aether’s Written in the Stars, and Brewtal/Newstead’s The Leshy.

And there’s a few sours (Kate’s fav) in there as well: Liberty/Hawkers’ Chateau Du Tasman, and Brouhaha’s Strawberry and Rhubarb Sour.

Dark beer in winter is unbeatable, and Leshy has been the pick so far this year. Slipstream’s new raspberry sour is a cracker as well; and we're also thoroughly impressed by White Brick’s Petrie Pilsner, as a very well made, easy-drinking pils.

Our Red IPA will be on tap in good beer venues throughout Brisbane from July 6. Check our Instagram for current locations!

We hope to be operating at full steam, obsessing over our very own stainless, in our permanent brewery home, with a multitude of great beers and a friendly local crowd of people and their pups.

Kate’s side obsession is bread, so perhaps a brewery / bakery ones top shop is on the horizon?

You can find previous entries in the Who Brews...? series here

Articles by Will
who brews brisbane 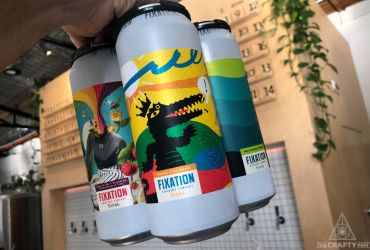 Fancy giving your mind a break from everything else for a short while? Then head to East M…