Ken Friend is every bit as chirpy, chatty and kind-hearted as you might expect from someone with such a surname. But don’t see his easy smile and mistake him for a passive person who lets the world push him around. Maybe 22 years in the Air Force shaped him into a determined go-getter with an eye for precision, or maybe he was already like that when he joined, but the fact remains that he’s someone who takes the bull by the horns.

When he decided he was ready for a change from the RAAF, Ken saw his passion for homebrewing as the inspiration for a move into the brewing industry. He went about it with military efficiency: gain industry experience; get educated; get a job as a brewer.

First up, he hunted for work in a commercial brewery, and secured a position at Stone & Wood for three months. Gain industry experience: objective complete.

Next, rather than looking into a diploma course that he could he could do via distance, he decided the best way to get educated was to go straight to the heartland of beer. He flew to Berlin and spent six months completing a Certified Brewmasters Course at VLB. Get educated: objective complete.

Certification in hand, he returned to Ipswich, where he’d been for his first decade in the Air Force, and got a job at 4 Hearts Brewing. After a brief transition period sharing a role with the previous head brewer, Ken found himself at the helm of 4 Hearts. Get a job as a brewer: objective complete.

That same determination goes into exploring new styles, learning the finer points of tradition European styles, and sharpening his skills across the board… but if you talk with him, you’ll likely just get a shrug and a chuckle.

Here he is to tell us more about himself and his life in beer as part of our ongoing Brew & A series.

I would likely still be working on aircraft. I do hope that if I had not found a passion for beer that I would have found something else food or beverage based that captured my interest and heart.

There are a couple at various stages. First was Little Creatures Pale Ale. Second was Meantime IPA. Third was a Bourbon Barrel-Aged, Triple Espresso Russian Imperial Stout… There was a lot going on in that beer.

I started fueling the itch by doing occasional brew days with Keith Grice at Hunter Beer Co and Shawn Sherlock (now owner of FogHorn in Newcastle] in his Murray's days. I would regularly drop into both breweries to talk beer, often with some homebrew in hand to share.

The brewing club I was a part of in Newcastle is also regularly involved in the Bitter & Twisted Beer Festival. It was a great opportunity to brew beers so a larger demographic could sample them.

When I took the leap and decided I was going to finally going to become a brewer, I decided to get some brewing qualifications as the first step and for this I needed three months hands on in a commercial brewery. This was a little harder but Stone & Wood gave me a shot and put me on their packaging team, so I took three months leave from my regular job and jumped at the opportunity.

Not long after this I found myself sitting in a classroom in Berlin. Following course and post-course travelling I was lucky enough to be offered a spot at 4 Hearts Brewing.

Homebrew wise, it was an American IPA. Commercially, I am very happy with the Belgian Tripel we recently released. I am still learning so hopefully my beers keep improving.

Hard to answer this one as everything is so interesting in the variances it makes. I would have to lean toward yeast, though. It's always fun to pitch different yeasts to the same base wort to see the differences that each produce.

I don’t think so. I have definitely brewed some shockers over the years but those beers are lessons learnt really.

I have not visited any of their sites as yet but I think it would be Sierra Nevada. They have been in the craft brewing scene for a damn long time and have had a major role in popularising the craft beer scene in America and really around the world. You don’t achieve something like that by being bad at what you do or by not innovating yourself and your products.

You could definitely learn a lot from a company like that.

Unfortunately, I don’t get to try as many awesome new beers as I want to or even should but Garage Project, BentSpoke (pictured below) and Aether are all impressive for various reasons, whether it is their marketing or the innovative, high quality beers they are punching out.

Probably a mix of Me First and The Gimme Gimmes and Dropkick Murphys.

I wish I had more of a knowledge of sales and marketing.

Be open-minded to beer styles. Every style has its place and every brewery has a demographic.

Thanks, Ken. You can find an ever-changing lineup of his beers pouring at the Pumpyard Bar & Brewery in Ipswich and look out for them on taps around South East Queensland too. The Spotted Cow in Toowoomba was one of the first Queensland venues to embrace better beer more than a decade ago. Now it's one of three venues joining forces to create the city's first craft beer festival, Brewoomba. read on 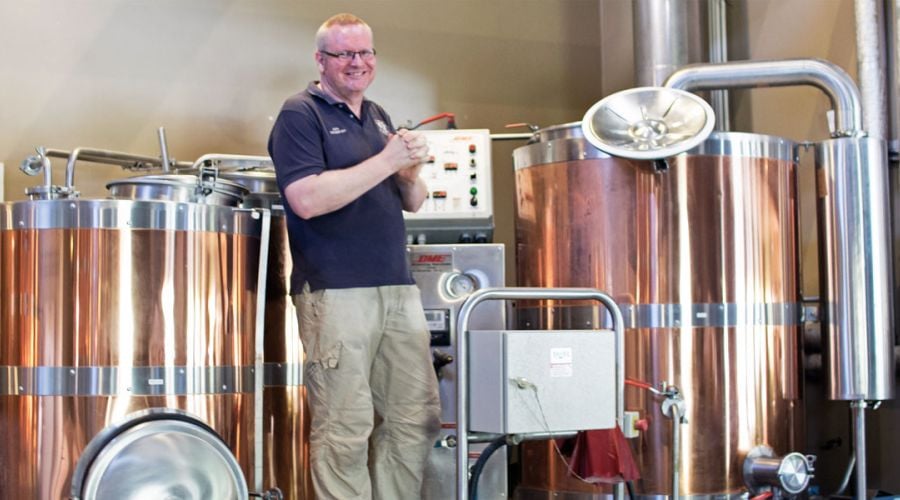