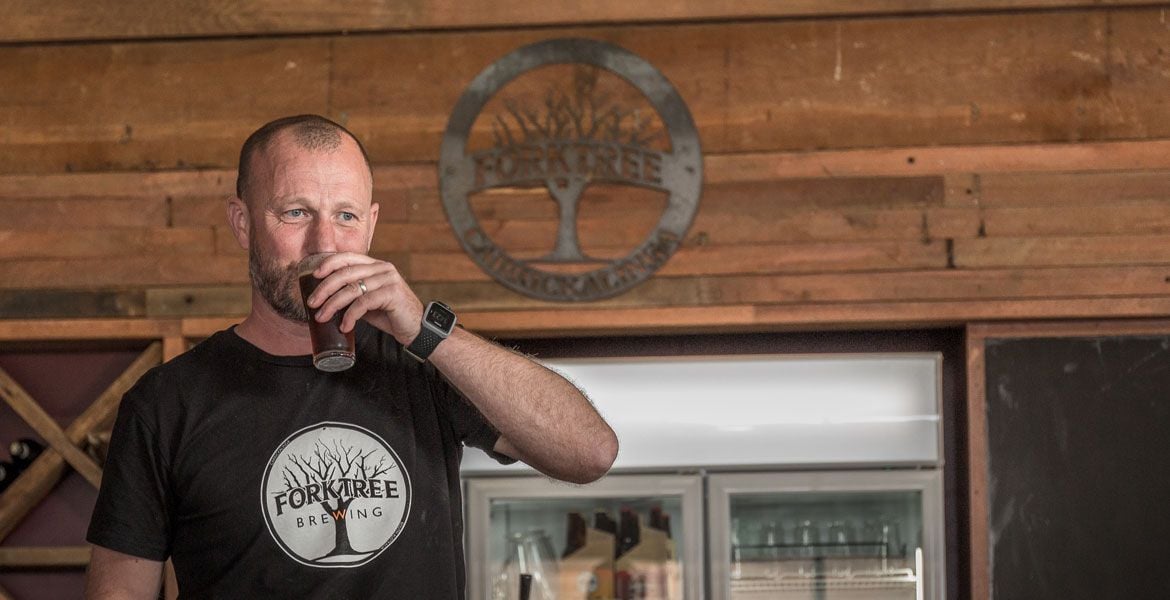 Carrickalinga on South Australia's Fleurieu Peninsula may be short on shops but the town does boast impressive views of the surrounding white sandy beaches.

It was those views, as seen from Ben Hatcher's parents' farm, that convinced the avid homebrewer an old shearing shed would make the perfect place for a new brewery, one that could entice tourists and holidaymakers as effectively as some of the surrounding wineries.

That was around four years ago and the brewery has only just opened this month. It turns out converting an old shearing shed into a licensed venue is a project that can move at a fairly glacial pace, as much due to council paperwork as actual construction. That long process came to an end on Friday, November 9, when final approval came through and allowed the Forktree family to welcome customers the very next day.

"Getting people into the venue and getting them seeing what we've created over the last few years, we couldn't ask for more really," Ben says.

For its next stage, Ben's plan for the brewery is for it to, well, become a brewery. Currently, the first Forktree beers are being brewed down the road at Smiling Samoyed in Myponga and the rest of the bar's taps are filled with beers from other South Australian breweries.

But, while there's still a bit of road left to travel, given the brewery is up and running we thought it was the perfect time to find out more from Ben as part of our ongoing Who Brews? series.

We currently contract brew with our mates at the Smiling Samoyed in Myponga. We’re planning on getting our own brewery set up at our facility in Carrickalinga within the first 12 months of operation.

I think the main thing for me is the creative process. The ability to work within the scientific processes related to brewing and then being able to create something that is a reflection of our brand.

We have our Sunrise Pale Ale and Sunset Red Ale out in the market at the moment.

Of those, what's your personal favourite?

I’ve got three kids and if you asked me that question of them I’d say that all three have their own personality and they’re all my favourite. Same thing with the beers!

Forktree Estate used to span quite a way along the coastline of the West Fleurieu Peninsula and the shearing shed that we have converted into the brewhouse facility was the main shearing shed for the estate; we wanted to reinvent what was an icon in the local area.

It’s also located on Forktree Road so makes it easy for people to find it...

Talking to the ex Chief Information Officer (who is from Portland, Oregon) at the university I work at about brewing started me thinking about it and then getting a brewing kit the Christmas of 2013 pushed it along.

One night when I was brewing, I had a six pack of Karl Strauss Tower 10 (after mainly drinking Tooheys Extra Dry or Hahn Superdry). Once I had a couple of those that sealed the deal.

Mine… with all the money going in to the business I can’t really afford to buy any other beer at the moment.

In saying that, I will generally have beers from the local South Australian breweries in there – it’s great quality and you've got to support local.

Angus and Julia Stone – Australian, fresh and chilled out.

I’d like to see the brewery and venue be a major tourist attraction for interstate and overseas visitors to showcase everything that’s great about the West Fleurieu in South Australia as well as being something the local community is really proud of. I’d also like to have a separate production facility to keep up with demand.

The best place to try the beers is to visit us in Carrickalinga, where we also have guest beers on tap. You can also mainly find the beers in the south of Adelaide and around the Yankalilla district.

Articles by Will
who brews? south australia Fleurieu Peninsula Anyone who's visited North Stradbroke Island – or Straddie – will know it's a gem of a place. These days, it also has a brewing company producing beers inspired by its natural beauty. We got in touch to find out more. read on Hudson Brewing was launched late last year by a husband-and-wife team keen to bring local beer to their adopted community. We caught up with Richard Hudson to find out more about the brewery located in Brisbane's bayside. read on