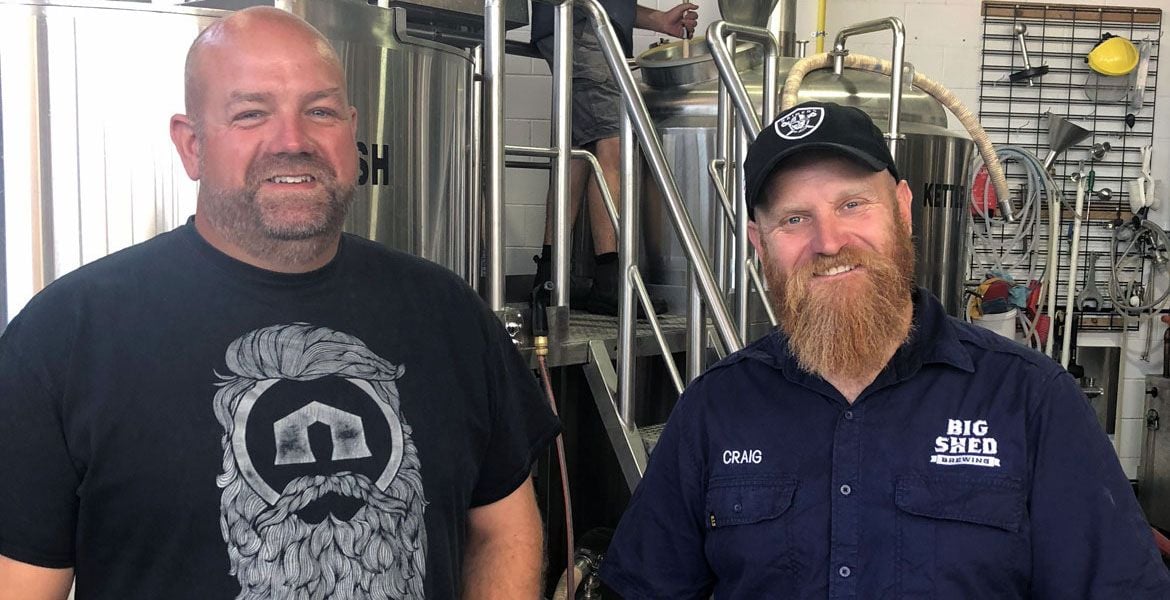 As the iconic song goes: "From little things, big things grow...", but if you launched your business with "big" in the title, then where to next? Bigger things, presumably.

That's the case for Adelaide's Big Shed Brewing Concern who today announced major expansion plans in the company of South Australian Premier Jay Weatherill and Stephen Mullighan MP. The ministers were there to reveal they are injecting $50,000 into the Big Shed operation as part of the Future Jobs Grant and also providing the brewery with a million dollar low interest loan.

Big Shed’s owners Jason Harris and Craig Basford (pictured above) will be putting the money towards a $2.5 million three stage expansion, which includes moving the brewery move to a new, larger complex.

Following today's celebratory announcement, a clearly delighted Jason told The Crafty Pint: "I've never had so many beers at a government meeting!"

For all the talk of broadening horizons, however, the business is staying local in Royal Park. As Jason puts it: “This is where we belong.”

Big Shed’s loyal fanbase will have plenty of room to grow too. Known locally as the Massive, they will soon have a lot more space in which to party, with a front of house venue capable of hosting up to 300 people on the cards. Over time, up to 31 jobs will be created via the front of house, packaging line and the brewery.

Their new digs will also boast a beer garden and a permanent stage for live music, while Mr Brown Beard will run the kitchen complete with wood fired pizza oven and low and slow style smokers. On the brewing side, the team is planning to install at 50hL Premier Stainless brewhouse, accompanied by four larger fermenters, a centrifuge, a lab, four-head canning machine and a cool room. Along for the ride is the Never Never Distilling Company, which has been operating out of the Big Shed since launching.

“We will have everything that we didn’t get the first time,” says Jason.

The old brewery is set to become a dedicated contract brewing facility, acting as an incubator in which smaller start-up breweries have the opportunity to rent tanks, as was always the founders' intention from day one.

As for the new, Bigger Shed, the 3500 square metre site is likely to be confirmed soon, with the opening of the venue set for late winter or early summer.

"It will be a destination of a kind that hasn't been done before," says Jason. Beer Food: A Feast For The Saison

Following our saison blind tasting last month, food and beer expert Paul Kasten has put together a few dishes perfectly matched to saisons for you to try at home, including two featuring the top two beers from that blind tasting: Boatrocker Saison du Bateau and Saison Dupont. read on When they learned their Boozy Fruit beer had taken out the People's Choice at the 2018 GABS festival, there was the odd tear in the house at Big Shed. Matt King called in to their brewery home to share a glass with co-owner Craig Basford. read on