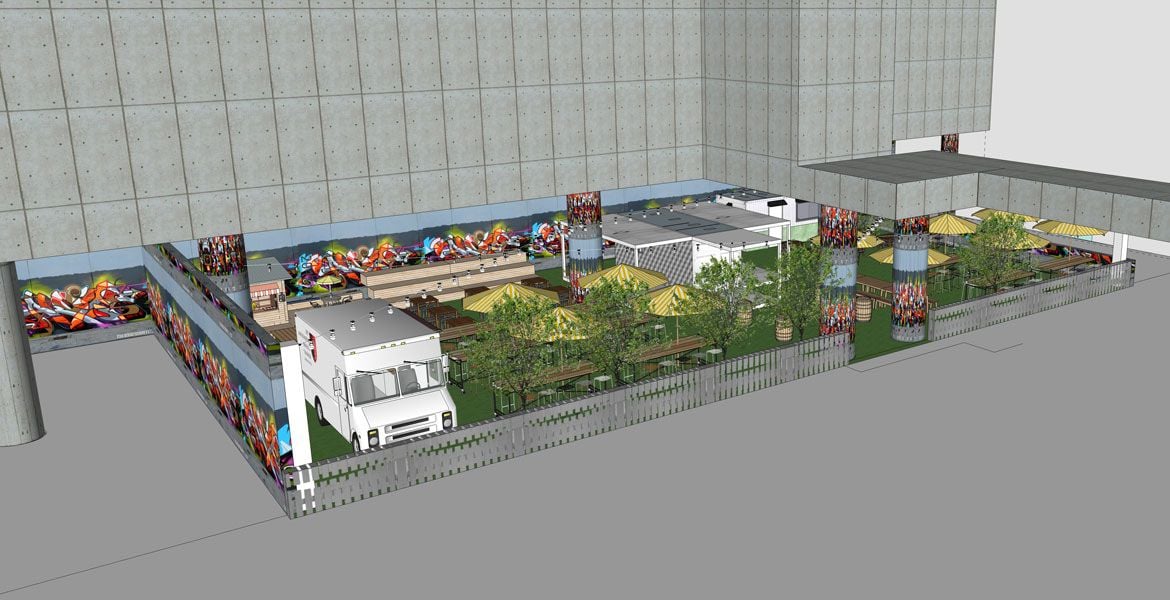 Melbourne has a deserved reputation as Australia's craft beer capital. But anyone arriving in the Victorian capital for the first time at the city's Tullamarine Airport would have little idea given the beers on offer in the public spaces in all four terminals.

That's set to change for summer, however, as the team behind Collingwood's Stomping Ground Brewery opens a pop-up bar – Terminal 3½ – for more than three months. The container bar, which sits between Terminals 3 and 4, will have ten taps pouring a range of the brewery's beers and will also offer a range of local Victorian food and drinks plus a rotating lineup of food trucks.

Originally, the bar was scheduled to open today (December 15); this has been pushed back a few days but it will then operate from 6am into the late evening until early April 2018, with the alcohol license running from 10am to 9pm. There will be screens showing departure and arrival times so passengers or those on pickup duties shouldn't miss flights and there are plans to show major sporting events and possibly even host live entertainment at times.

"I was flying about three months ago and read an article about how more breweries in the States are opening in and around airports," says Stomping Ground co-owner Steve Jeffares. "I get frustrated that Melbourne is famous for its food and drink culture yet it's not particularly well represented at the airport."

He decided to cold call the airport and his timing was good: there was a new CEO in place keen to introduce changes.

"Through the course of that conversation, they said, 'We've got this site out the front and we've always wanted to do something with it.'," says Steve. "We talked about festivals and pop-ups and activations and they said, 'When do you want it – before Christmas?'."

After the shock of being presented with such a short timescale had subsided, he chatted to his colleagues and they decided to give it a go. Given Steve, long-standing business partner Guy Greenstone and their team are behind The Local Taphouse in St Kilda, one of Melbourne's pioneering good beer venues, as well as the GABS festival, they're not averse to taking risks – and have a pedigree when it comes to helping bolster Melbourne's reputation for craft beer too.

Thus, after just six weeks and thanks to "a mammoth effort by a lot of people" T3½ is almost ready to roll. Biggie Smalls is lined up as the first food truck, St Ronan's are supplying the cider, Proud Mary the coffee and they've even brought in Melburnian cubby house creators, Castle & Cubby, to create a children’s cubby area from recycled materials.

The airport's chief of retail Andrew Gardiner says: “When people think of Melbourne, they think of great restaurants and cafes, music, arts and culture and events, and this activation brings all of those elements together.

“The great thing about this pop-up is that it appeals to all holidaymakers, from groups of friends to solo travellers and families. Parents can relax knowing there’s a dedicated play space for kids with a cubby house and even locally made icy poles and ice creams.

“The whole idea is to create a welcoming space that leaves a lasting Melbourne impression.”

Of course, while there is much to get excited about in the concept, particularly for beer lovers travelling in the coming months, there is the question of how many people will have time to spend at the pop-up. While there are hotels in and around the airport and well in excess of 10,000 airport staff, the Stomping Ground team will be hoping to attract hefty numbers of travellers, which will mean those arriving early enough for a drink before heading through security or with enough time to chill before heading onwards after landing.

"This is the great unknown," says Steve. "The airport is confident. They've got 13,000 staff who are enormously excited and we're right next to the Skybus stop and will have departure and arrival screens up too.

"We've got capacity for 250 people but have designed it in such a way that hopefully it won't look empty if it's half full.

"One of the key things is that the traffic movement at the airport is very different to what you find in, say, the city so it's going to be really interesting to see how it happens.

"Ultimately, we felt this was a really exciting opportunity and have taken a calculated risk that we won't lose the house on it. We're not afraid to take risks and just want to try stuff and have fun."

However it turns out, it's another feather in the cap of the young brewery that has enjoyed a phenomenally successful first full year of operation. Other notable moments have included the launch of the PRIDElweiss beer to support artists within LCBTQIA+ communities with Midsumma Festival, a burgeoning partnership with Melbourne City FC and a successful attempt to raise $75,000 for Movember by selling a thousand kegs of its Gipps St Pale in November – four times the usual monthly output of its flagship beer.

What's more, as with the BIGGER THAN XMAS Good Beer Week banner that was plastered across the inbound Tullamarine Highway in the leadup to the 2016 festival, it puts craft beer in front of visitors as soon as they arrive in Melbourne.

"This is an opportunity to put independent beer at Melbourne Airport for four months," says Steve. "It's a great opportunity for us and the CEO is really excited. Who knows where it will lead." It's been a busy fortnight since our last Cabal update, including the brewing of the very first Crafty Cabale with the legends at The Wheaty in Adelaide. We've got plenty of winners to announce as well as some forthcoming goodies. read on