“Dude, you’ve gotta try their Double IPA, it’s a killer,” came the advice from a bearded guy standing in line for a beer, as he assessed the lineup of 30-something breweries pushing their wares in front of him.

Away from the beer lines, groups of men and women raise their plastic cups filled with NEIPAs and imperial stouts and compare tasting notes, as the Fleet Foxes perform on the main stage just 100 metres away.

Welcome to Beer Lands, just a small part of the San Francisco music festival Outside Lands, where there’s just as much focus on what’s in your glass as who’s on stage.

Across three days in Golden Gate Park, thousands of music fans flood in to see their musical idols, from Metallica to the Gorillaz and The Who. But, San Francisco being what it is, there’s far more on offer than punnets of fries and mid-strength American lagers.

Beer Lands instead brings together an impressive collection of Californian breweries, from Almanac to Anderson Valley, Sierra Nevada to Speakeasy. Whether you’re a fan of banh mi, smoked brisket, or even creole style jambalaya with your IPA, Outside Lands has it covered.

The combination of good music and good beer has become a common sight at music festivals across the United States, where the proliferation of craft breweries means it’s no longer good enough to throw some Miller and Bud on the menu and call it a day.

In Australia, progress is slower, but the ironclad grip of the big boys is slowly loosening, and local breweries are sneaking their way onto more and more music festival lineups.

Newstead, Mismatch and Temple Brewing have all been spotted on Laneway Festival's drinks lists, while Stone & Wood is a regular guest at Byron Bay’s own Mullum Music Festival.

The Mountain Goat team in particular has made a point of bringing beer and music together over their the brewery's 20 year history, supporting more than 100 music events this year alone, according to brand manager Zoe Ottaway.

Melbourne’s Corner Hotel was one of their first customers, and they’ve been supporting community radio station 3RRR for around 17 years. These days, Goat beer can be found at Brisbane’s BIGSOUND music festival, as well as at smaller grassroots events across the country.

“Music has always been a genuine part of the Mountain Goat culture, given Cam’s career in the music industry prior to setting up the brewery,” Zoe says.

“Other breweries have been active of late with music influencer campaigns, which is great as it gives craft beer an immediate connection with high profile artists, but our heart absolutely still sits with grass root and live music – we adore it.

“There are so many people out there giving it their all, whether that be artists, agents, venues, presenters, volunteers. The fact we are in a position to help these great people do great things in our community is something we value very much.”

A HAVEN OF MIKKELLER

Stepping it up even further, Denmark's HAVEN festival brings together music, art, food and culture in the heart of Copenhagen; it is founded by a team that included Mikkeller’s main man Mikkel Borg Bjergsø.

Twelve beer bars serve the punters a staggering plethora of Mikkeller brews. The whole beery family was there, from the Spontan range to Mikkeller Black. On tap at the non-specialty (it feels insane to type “non-specialty” at a Mikkeller festival) bar and in cans, was “HAVEN”, the husøl (house beers), a pilsner and a pale.

As if that wasn’t enough, there was a live brew day inside the Baghaven. Nothing special, just a Senne Valley wild ale collaboration between Mikkeller, 18th Street Brewery and Other Half. No big deal.

Taken together, it ensured HAVEN was a festival experience unlike any other. People were acting like drinking an Alesmith Speedway Stout off tap and watching The National was a completely normal occurrence. Wandering around with pint cans of fresh Other Half All Citra Everything IPA wasn’t nearly enough to encourage a second glance. Groups of dancing festival goers displaying a veritable beer rainbow while Iggy Pop destroyed the stage was a wildly unnecessary reminder that Scandinavia knows how to fucking party.

It’s not exclusively the fact that an event of this style and magnitude can be accomplished, HAVEN speaks volumes about the unwavering commitment of many to promoting craft across so many intrinsically linked industries.

The core concept of presenting pristine local produce to patrons in such a relaxed environment turns the traditionally lacklustre food and booze of music festivals upside down. Australian festivals, take note: ditching the big guns and bringing locals on board is entirely possible and, if HAVEN is anything to go by, much more popular than you would expect.

Of course, one of the most effective methods of drinking quality beer at Australian music festivals lies with the festivals operating a BYO policy. Two that always have are Meredith Music Festival and its sibling Golden Plains, which make a point of encouraging people to bring their own favourites, rather than standing in endless lines for overpriced commercial lagers.

Aunty Meredith, omniscient figurehead of the two festivals, focuses on protecting her BYO policy at all costs, including steering clear of commercial alcohol agreements.

"All of the decisions we make about alcohol we make to protect our BYO policy. Our BYO policy extends from campground to the amphitheatre, so you can watch the bands and drink your preferred brew you have picked up somewhere locally or convienient to you," Aunty Meredith says.

"Our beer sales at the festival are very small as Meredith’s punters have wholeheartedly embraced the BYO policy. The on-site bars are designed to provide a few options for people who have run out of or need a change from their own supply."

It works well, with bottleshops prior to the festivals stocking up on swathes of locally produced cans of craft beer and, increasingly in recent years, The Sup' filled with music lovers clutching beer cans of every denomination.

While she won't confirm exactly where the beer for the amphitheatre's bars come from, Aunty says they see it only as a back up.

"The beer we have sourced is locally brewed and palatable to a broad market and all transported from one nearby source. By doing that we aim to protect the smaller brewers by not drawing attention to one or two small breweries to the possible detriment of others, and to maintain people’s choice in BYO."

It's clear Australia still has a long way to go before we see dedicated beer sections at music festivals, but Zoe is hopeful that the tide is turning. She and the Goat team have experienced increased interest from music festivals over the last few years as the craft beer industry itself has expanded.

Rather than needing to prove that good beer will sell, more and more music festivals are seeking out breweries with which to partner.

"I don’t think there is actually even a need for convincing – there has definitely been a shift in the organisers reacting to what people are asking for, just like bars and pubs," Zoe says.

While that has worked well for breweries like Goat, which have proven track records in supporting live music, it also paves the way for other breweries looking to get involved in the space. Where festivals have had good responses with one local brewery, they may be more willing to try another as well.

"We do a lot, and it is hard work, but it means we can genuinely support as many causes and people as possible," she says.

"I think most people would be surprised with how much we do with music around the country, but it is absolutely beneficial, as we are building long-term relationships which help both us and our partners and, ultimately, Australia’s music industry."

While some festivals are starting to shake up their offerings, for Zoe there's still a long road ahead before Australian festival goers will be pairing imperial stouts with heavy metal or IPAs with R'n'B.

"I think it is still early days and some festivals are certainly better positioned than others to be offering craft beer as their only beer option, but I do think we will only see this grow [in the coming years]."

Until then, we can keep loading up on cans and heading for those festivals that allow patrons to curate their own beer selections while waiting for our own haven to arrive. As Noma Australia's long sold out run kicks off in Sydney, it's not just the ingredients on the plate that have a strong Australian focus. The drinks list features several Australian beers, including some created especially for the restaurant. read on 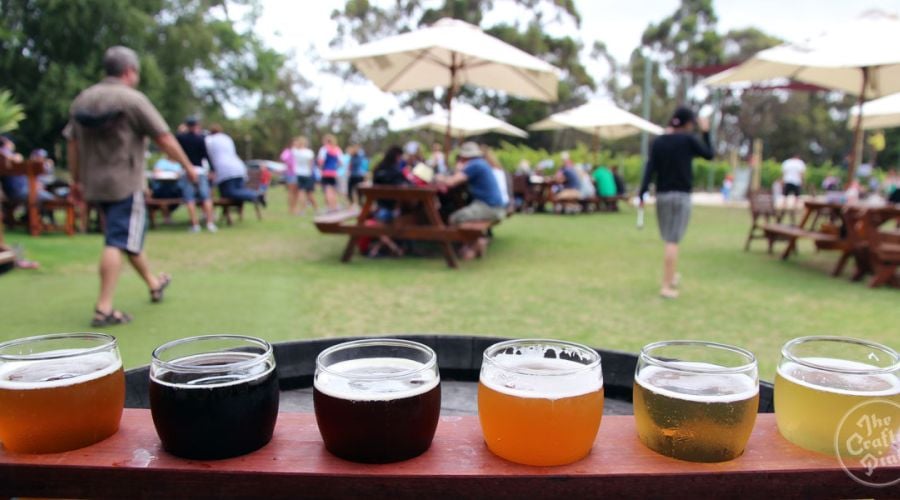 Visitors to WA's Great Southern region will probably have visited Boston Brewery and sampled its wares. Now, with a new brewery in place and bottling line on the way, you may not have to travel quite so far to check them out, as Pia Poynton discovered. read on