The weekend just gone saw beer lovers and some of Australia's best brewers gather in Launceston for a truly unique beer festival. The Fresh Hop Beer Festival showcased nothing but wet hop beers – 28 of them – that ranged in style from a sour IPA (the beer that won the People's Choice) to English style ales, IPAs and farmhouse ales.

Those in attendance would have been impressed, not just by the beers but also the the great live music, masterclasses, delicious local produce and the host venue, Saint John Craft Beer. It's a bar that must rank alongside the best beer venues in Australia and, taken together with the festival, would give visitors the impression that it's not just Tasmania's brewing industry that's growing fast – the state must be home to many a great venue too.

Yet, while there are quality crawls to embark upon in Hobart, taking in venues and brewpubs alike, the north of the state has been conspicuously lacking. Prior to Saint John opening three years ago, craft beer in Launceston was pretty much Crown Cellars, the drive-thru bottleshop a few streets away. Aside from that, there was the Weldborough Hotel, reinvented as a home for Tasmanian beer and cider in 2009, located almost two hours drive northeast in the heart of mountain biking and trekking country.

Steadily, however, the offerings for beer tourists – and opportunities for local brewers – are on the rise. Earlier this month, the Saint John crew opened a second venue, Empress Craft Beer, in Devonport, installing 12 taps pouring all independent craft beer and cider (and a nitro espresso martini when we called in) in a city where, previously, a sloth could count the number of crafty taps on one hand.

Late last year, Tandy's Alehouse opened in Launceston pouring nothing but Tasmanian beer and cider from its taps. The recently opened pizza venue in Derby, The Hub, may not have taps but is tearing through cases of beer from its local brewery, Little Rivers, and new owners have given Weldborough a serious refurb and seen business double in eight months.

When Sydney's inner west alone can lay claim to a dozen or so brewing companies and single suburbs of Brisbane or Melbourne offer half a dozen or more crafty venues to check out, half a dozen outlets supporting craft beer spread across half a state may not seem a great deal. But, says Jade Burley of Empress and Saint John, even before they opened in Devonport, they noticed an upturn in orders for the beers they import from the mainland, such as Modus Operandi, Dainton, Hawkers and Pirate Life.

"Since people knew we were opening, there's been a groundswell of genuine interest," he says. "More commercial bottleshops are enquiring about craft lines this year."

In the first two weeks after opening, the Empress staff welcomed a broad spectrum of people through the doors of the venue named after one of the ships that used to operate the route between the port town and Melbourne.

"I grew up here and have mates and family here on the coast and felt there was enough interest [for such a venture]," says Jade. "We had a lot of visitors to the bar in Launceston from the North West Coast and recognised there had been a homebrewing scene here and that means there's a base for craft beer."

He says staff have been "quite surprised at the level of knowledge that people have had already", adding: "There's always been some pretty amazing produce on the North West Coast and an underground foodie scene. People who liked to cook really well at home would go to Hobart or to Melbourne regularly to scratch their itch, but there's a groundswell of things starting to happen."

This growing interest has been felt at the Weldborough Hotel since new owners took over last September. A broad group of investors from the wider North East region of the state encompassing everyone from farmers to those with hospitality backgrounds responded to a call from the owner of a mountain bike business in nearby Derby.

"We really took it on as a community service exercise as much as anything," says Kirsten Winspear. "A good friend of ours has Vertigo in Derby and he said, 'You know this pub is up for sale and needs someone to come and sort it as we need decent food and accommodation in the area.'"

So the group did just that, taking on the beautiful, English country village style pub (pictured above) that once pipped Cradle Mountain to the Tourism Initiative of the Year title, giving it a serious makeover, including a new kitchen, and bringing in a chef with a good reputation locally. The focus on Tasmanian beer and cider continued, while the range of Tassie wines and spirits was expanded.

"Our kitchen is twice as busy as we expected," says Kirsten, with 180 meals a day regularly ordered on weekends. Many of the taps are on rotation, with IronHouse, Morrison, Van Dieman, Moo Brew and Little Rivers always pouring; Weldborough is the biggest seller of Little Rivers beer outside the brewery's own cellar door in Scottsdale.

"People know what they're drinking too," she says, echoing Jade's comments about educated drinkers. "Even the tourists know what to ask for.

"Our customers are vastly different because mountain bikers are a broad culture. Some are broke and 20 and have spent all their money on their bike; some are 45 and can't play any other sports anymore so are biking.

"We get local Tasmanian bikers and grey nomads too and they're all drinking craft beer. It's interesting that that's what binds them."

You can read a past article about the links between craft beer and cycling here. 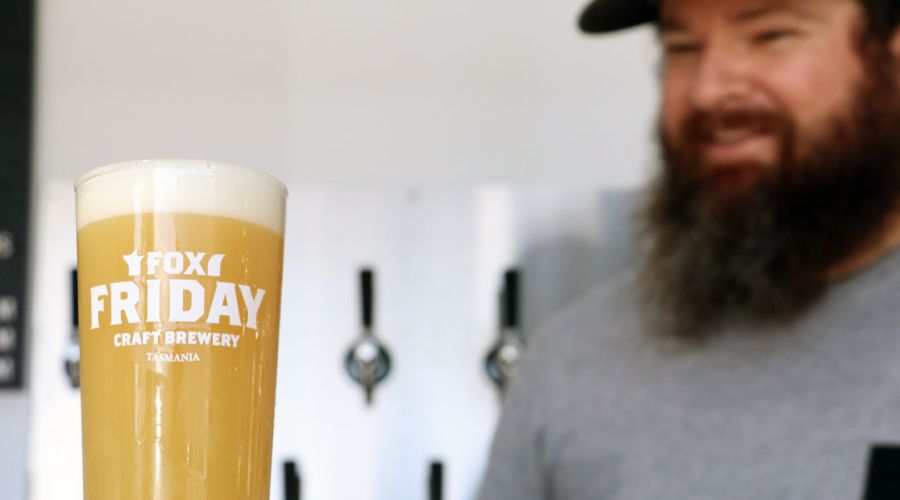 The sale of Hobart brewery Fox Friday went under the radar for most, but the hazy IPAs the new owners are producing are starting to create a stir. Dorian Broomhall caught up with the American brewer keeping hopheads happy. read on Help Us Get Blind: Mid-Strengths

Following our Golden Age Of Mids? feature, we're bringing our blind tastings out of hibernation to see who's doing such beers the best. We're getting a panel together in early November and want your help picking the lineup. read on