When Glen Humphries won the Crafty Pint sponsored AIBA Media Award in 2016, he’d already begun writing a book about beer. His concept was simple but clever: a historical snapshot of 24 Australian beer stories told through 24 chapters. It would be called The Slab.

A journalist for more than 20 years, currently for the Wollongong-based Illawarra Mercury, the default tone of his work at the beginning was of a suitably impartial bent – full of facts with little emphasis on the fluffy but fun stuff. But the award changed things. He had not won it for any down-the-line journalism. It was thanks to the more colourful stories and opinions on his blog, Beer Is Your Friend.

“I’d started out writing The Slab in straight history style but I won the award for the writing I’d done on my blog and thought, 'Why am I not doing the book in that style?',” says Glen.

“So I went back and rewrote everything I’d done up to that point in a more lighthearted and entertaining way, rather than writing a dry history book.”

All told, The Slab took a year and a half to research, write, rewrite and publish, but all the endeavour has produced a thoroughly entertaining and interesting read – regardless of whether or not you have any enthusiasm for beer. That comes to Glen's approach, one where he's not portraying himself as an absolute authority on either beer or history, more as someone who’s clearly very interested in – and is having a wonderful time discovering more about – both. And that, in essence, is how he originally came up with the concept of The Slab.

“When I first got into beer I started reading a lot of beer books, wanting to know more about it and where it came from,” says Glen.

“In the process there’d be maybe a paragraph or a page, at most, about something that had happened in Australian history or Australian beer history and I’d be like, ‘Hang on, I want to know more about that. Don’t go back to the other story – tell me about that.’

“So I figured I’d go and research and find out myself, all the while thinking, ‘Someone’s going to write this book so I can go and buy it and read it.’

"At some point I realised no one was going to do that and I’d have to. By then I’d done some research and had a starting point, so I took it from there and starting writing. But I basically wrote it while I was waiting for someone else to write it.”

There was plenty to write about. The Slab covers topics as broad as James Cook’s first attempts at brewing, the development of state-based parochialism, why Canberra went alcohol free, the tale of Bennelong and James Squire, the resistance (from pretty much everyone) to random breath testing, the Darwin Stubby, David Boon’s talking dolls and what all those Xs mean in XXXX.

While an entertaining writing style and some off kilter subjects make the book highly approachable, it is thorough research and a pursuit of facts that provide the cornerstones of The Slab.

“I may have tried to simplify things for humour but sticking to the truth was number one,” says Glen. “I wasn't going to start making things up just to make it sexier or try and make it sell better.”

Early on in the draft process he was given a little reminder of the importance of not taking every story on face value, especially when it is a story that involves beer. It concerned the tale of the colonists of the First Fleet who, on January 26, 1788, purportedly toasted the health of the colony by drinking porter at what is now Circular Quay. This was a snippet of history Glen had long believed to be true. And perhaps it is, but he unearthed nothing to confirm it is so.

“It’s in all the books and I’d presumed it to be true – and I’d actually already written about it”, says Glen.

“But I bumped in to [Australian Brews News’ founder and past AIBA Media Award winner] Matt Kirkegaard right after the awards in Melbourne and he’d mentioned there wasn’t any evidence to support it. I thought, ‘Shit, really?’

"So rather than take it on face value I decided to take a look, and he was right. They raised the flag, they fired a volley of shots and they had a toast, but they don’t say exactly what with. Porter was probably the first alcohol to be drunk by white settlers, but there was no evidence to say it was used to toast the health of the colony that day. It could have been Madeira, it could have been rum, it could have been wine. And it could have been porter.”

In the grand scheme of things, fussing over who drank what kind of alcohol at an impromptu party more than 200 years ago may seem like a minor detail, but apply enough hearsay across 24 chapters and your factual historical book takes on a rather alternative complexion. So Glen put his head down and started sifting through the dross surrounding his two dozen topics.

“Having taken the porter thing for granted and been burned, I wanted to find evidence,” he says.

“Like a lot of things, the internet’s no great help. You could find a word or a phrase mentioned online and find it on eight different sites, but they’re all just referencing each other and there’s no source for the quote. And I’m not criticising that, I would have done it myself – I did do it myself – until I went, ‘Hang on, maybe I need to look at this a bit more closely.’” 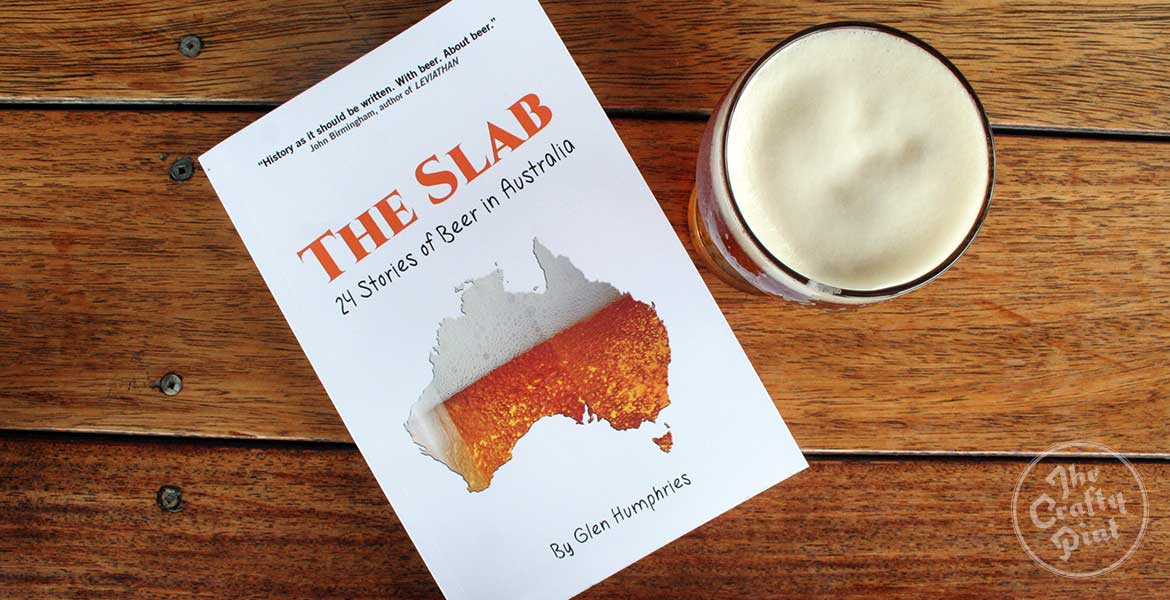 He began to expand his own library of beer and history books even further, started trawling through academic university papers and journals and pored over digitised newspapers from the 1800s, for example tracking down our old friend James Squire to see what he was really up to back in the early days of the colony. This whole exercise wasn't done with a grand goal of busting any myths. It was simply part of a desire to produce the most accurate work he could, coupled with a genuine curiosity about what he was writing.

“Research is always easier when it’s something you're actually interested in,” says Glen.

“It doesn't feel like a burden to sit there and read an academic paper about six o'clock closing or statistical figures on drinking over the last 150 years. Whereas if I’d been commissioned to do it, it might have felt more like work.”

With all the effort that’s gone into it, The Slab covers plenty of ground that has seemingly been glossed over in the realms of common beer knowledge. Read it and you will definitely learn something. You will very likely learn a lot of things.

“I’d be disappointed if someone read the book and went, ‘I knew that already,’” says Glen. “I’m a bit of a geek, I read a lot and there’s a lot of stuff in there that I wasn't aware of beforehand. My wife may be a very biased observer, but she read it and said she’d learned more about Australia than she’d ever learned from school.

“My favourite story is the one about Edmund Resch from Resch’s being jailed for being German during World War One. I didn't know anything about that. Breweries love to cash in on their historical connections but I don’t imagine Resch’s is ever going to release Resch’s Jailhouse Lager, or something like that.”

To elaborate, that short chapter goes on to outline the reasons for internment (essentially none, besides being born German and despite having lived in Australia for 50 years), the generally appalling conditions in the internment camp, forced land sales, the very different travails of Resch’s two heirs and the coincidence with the temperance movement. Beer history, it turns out, involves much more than just beer.

Although a lot of information has gone into the book, some stories – much to Glen’s disappointment – didn't make the cut, or were restricted to shorter mentions, because there wasn’t enough information available; the brewery near Sydney’s Central Station – then a cemetery – which brewed beer using water that was essentially filtered through corpses; the man dispatched to the penal colony for stealing beer who became the first white person to be killed by Indigenous Australians; the suggestion that the Australian dialect formed out of drunkenness. But, he believes, there is not enough to write Another Slab and, besides, he seems content with his contribution.

“What I’m trying to get across is the idea that history is a story, that it’s made up of stories, and it doesn't have to be dry,” says Glen.

“I remember interviewing a university professor once and he said that history is so often written from the top down, whereas he preferred it from the bottom up because that’s where all the interesting stuff is. It doesn't have to be about kings or queens or prime ministers. It can be the prisoner who came over on the First Fleet, it can be the brewer who was jailed in World War One just for being a German, it can be the Western Australia brewer who makes a beer out of glaciers. History doesn’t have to be the boring, dusty kind I learned at school.

"And history, much to my surprise, is open to interpretation, but I’ve made this true as best I can make it.”

The history of Australian beer is indeed a colourful one, one to which Glen has now added his own chapter.

You can buy a copy of The Slab from Glen's website – www.beerisyourfriend.org

Or you can make sure you read tomorrow's Crafty Pint newsletter (February 10) as Glen has given us two copies to give away.

And, if you write or comment on or cover the beer world in anyway and would like to follow in Glen's footsteps, submissions for this year's AIBA Media Awards are now open. You can find out more and register here. Brewers wanting to enter beers can also do so via the same link. 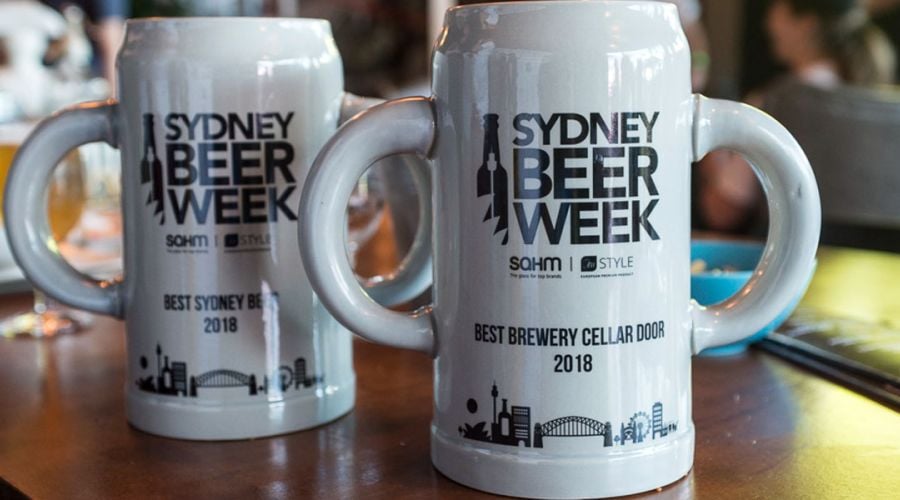 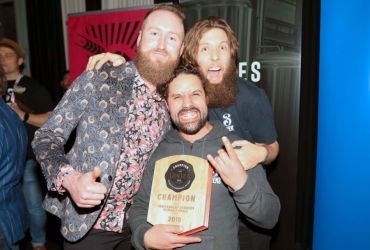