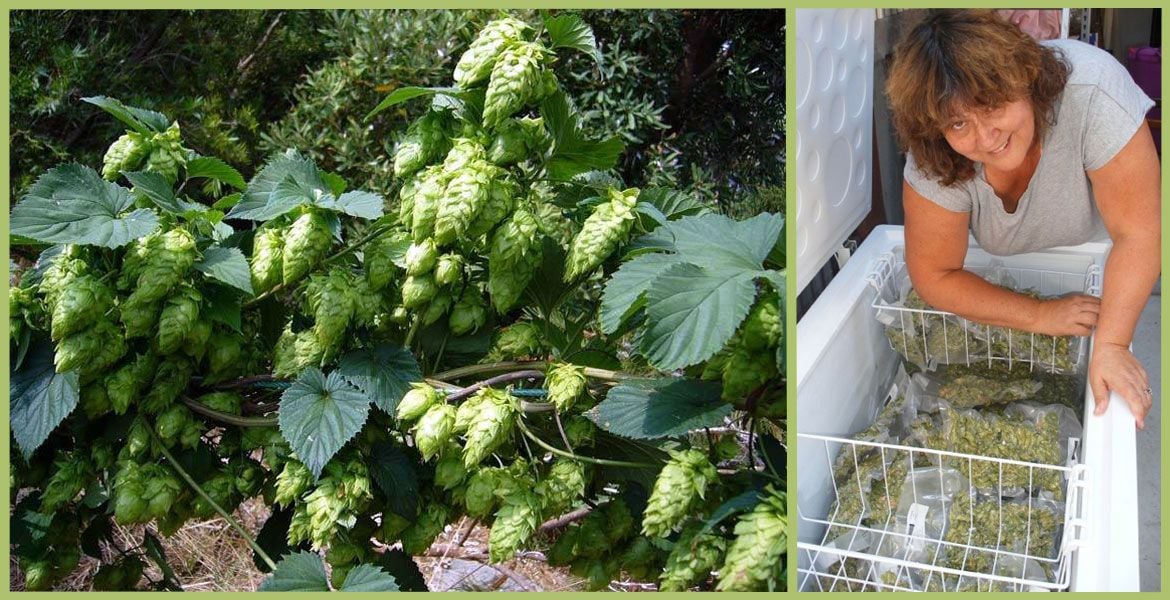 Take a semi-retired couple who knew nothing about hops, add a secret yet crazy cultivar, surround them with Southern Ocean winds and the result: an exciting new opportunity for Australian brewers.

As the world's pool of hops is drained by the rapid growth of breweries globally and a growing penchant for hop heavy brews, Western Australians Colin and Britt Butler are building a series of crops that promise to give Aussie brewers a local supply – as well as fresh horizons.

A hybrid hop variety called Kracanup has excited several West Coast beer gurus, including the award-winning team at The Monk in Fremantle.

“Our Kracanup is very tasty and very fruity,” says Britt (pictured above) from her farm near Albany. “And it so totally different [in character] between being wet or dry.

“It is such a high yielder. I’m getting 4 to 4.5kg per bine [when their typical haul from other varieties has been around 3kg]. We can pick it fresh, pack it, freeze and send it anywhere overnight."

As for how they came to become hop farmers, she says: “My husband got the business from someone, who we call the ‘Mad Scientist’, and he bred the Kracanup. He was selling the root stock on eBay [and] we thought we could sell fresh flowers locally.”

The Monk’s brains trust Matt Marinich and Gerrard Mitchell [the man behind Beersine and an occasional Crafty Pint Beer Food contributor] made a lightning trip to the new fields of green gold on the south west tip of the state last month and rushed back handfuls of Kracanup for a special version of the brewery's Common Ale. It was launched at a wet hop harvest dinner last month, which you can read about on girl plus beer's site here.

The hop is a cross between Cascade and Chinook, two varieties that originate in the US and that have been key players in the rise of the West Coast American pale ale style.

The crossed hop is named after the Butlers’ property. And currently Britt and Colin are in the process of applying for a biological patent on Kracanup. Thus far, they have road tested the hop in English bitter and lager brews and say they've been overjoyed at the results.

That they are part of a growing number of small, independent Australian hop growers is quite remarkable, given that three years ago the Butlers knew little about hops, except that they were used in beer.

But since taking over the Hopswest Albany property, when they were handed a small sample of varieties, they have rapidly grown their operation into one featuring more than 600 bines. As well as Kracanup, the couple also grows Cascade, Pride of Ringwood, Red Earth, Wuerttemberger, Hallertau and Goldings varieties, some of which were also used at the Monk's recent dinner.

“We had no idea on what we were getting ourselves into,” says Colin.

“But in a short time we were getting homebrewers come down, use the hops and say they’ll never go back to pellets again.

“Kracanup is such a versatile cone. Wet hopped compared to dry and from an early pick to a late pick gives you three different tastes. It’s unbelievable. It is so full of lupulin [the active ingredient in hops].”

As demand on hops increases, the beer industry is keenly seeking new fields. Yet few identified WA, with its hot and dry climate, as a potential answer. However, Hopswest isn’t the only operation in the state, as our recent article on the first harvest at Karridale Hop Farm shows.

Indeed, the geographic location of the WA’s oldest settlement provides the perfect environment for the Butlers' business, and not just because it’s within the 35 to 55 degrees latitude that hops are known to grow worldwide.

“Hops don’t like hot winds,” says Britt. “They need an acidic level of about six to seven [pH] and they don’t like being in water – they grow for water.

“As long as you can protect them from the winds you’ll be okay. The hot winds in Perth cook them too quickly.

"We don’t get them here. So we are in a lucky position.”

For more on Britt and Colin's hops, head here. The demand for barrels from craft brewers and small distilleries has grown to such an extent, being a barrel dealer is a viable business. We got in touch with one to find out more. read on Uraidla Brewery landed two beers in the overall top ten best Australian drinks at the second Drink Easy awards. They were joined in the best of list by Heaps Normal's Quiet XPA, flying the flag for non-alcoholic beers. read on