We've added a dozen more new listings to our brewery, venue and bottleshop directories since our last roundup. So, as has become our habit, here they are collected in one place in case you missed them when they went live first time around.

It's a roundup that covers all six Aussie states, from a beachside bar in Margaret River to Lonny's home of craft beer, from Fortitude Valley to Footscray, and from country SA to country Victoria. We've got plenty more in the pipeline too.

If you're interested in finding about getting your venue or brewery listed on the site, email crafty@craftypint.com and we'll send you a Media Kit.

The Common – The Margaret River region is home to the greatest concentration of microbreweries in any rural part of Australia and now Margs has this bar-restaurant serving quality beer within strolling distance of Prevelly Beach.

The Dutch Trading Co – The Perth beer bar scene is finally starting to come alive, with this sour-loving venue, also known as the DTC, leading the charge. It's only been open a few months but has already been the Aussie venue chosen for Cantillon's annual Zwanze Day celebration.

Smiling Samoyed – Young couple with love of Samoyeds quits normal jobs, takes over ramshackle rural brewery, names it after said dogs, makes quality beer, crowds pack out the joint, they expand the brewery and then win major trophies in their home state's annual awards. What's not to like?

The Wheaty Brewing Corps – After well over a decade pouring the finest beers in the world and, more recently, collaborating on a tiny scale with some of the world's best brewers, the ladies at The Wheaty decided to show they could walk the walk and built a 600 litre brewery at the back of their pub so they could make their own beers and collaborate (or spoon) on a greater scale.

Mt Macedon Hotel – After laying dormant for years, new owners took over this historic Victorian pub and breathed colourful – and somewhat idiosyncratic – new life into it. It's a great pub to look at, with sprawling landscaped terraces and gardens, that also just happens to have heaps of taps pouring great beer that the locals – and visitors to the region – are lapping up.

Big Little Baby – Not too far away is this venture also driven by a desire to support quality, local produce. But rather than a reinvented old pub, this is a bottleshop-cum-bar that brings a slice of inner north Melbourne to Macedon, focuses solely on independent Victorian drinks, serves up tacos and has a soft spot for psychobilly bands.

Fancy Hank's BBQ – Even if your gaze never strays above eye level, chances are you'll know when you're near Fancy Hank's. The BBQ joint has three impressive smokers that go to work on the wraparound veranda of the former Mercat Hotel overlooking Melbourne's Vic Market. These days, you'll find a growing selection of quality beers to wash down their smoky meats, maybe even some they've brewed themselves with friendly breweries.

Fox in the Corn – We went out on something of a limb with this place, claiming it could be the restaurant doing beer better than anyone else in Australia and we're still waiting for someone to suggest somewhere better. Fresh pasta the owners make themselves from the purest of ingredients is served up with a dazzling array of lovingly curated beers (and other cool drinks). They've recently added takeaway and a beer garden is coming.

Wine Republic Northcote – The visual appeal of a bottleshop shouldn't really matter. What matters is the quality of the selection, the knowledge and service of the staff, and the way they treat their products before you buy them. Wine Republic's second store ticks all those boxes (in spades – 800 beers kept refrigerated in two banks of fridges, no less) but it's also sexy as anything. Did we just call a bottleshop sexy? Yes. Yes we did.

Saint John Craft Beer – We're told that, to all intents and purposes, this is Launceston's craft beer scene right now. In which case, the quality of the city's scene is in utterly indirect correlation to its size. It looks great, the staff are equal parts knowledgeable, passionate and open for a chat, the beer selection is damn fine, they hold cool events, have a permanent food truck on site and have even started barrel-ageing their own beers. Oh, they've got one of Modus Operandi's CANimal machines behind the bar too.

Robin Hood Hotel – While other parts of Sydney have been embracing better beer for some time, the eastern suburbs have proven rather more reticent. This drive-thru bottleshop (and adjoining hotel) is doing its best to further the cause, offering up a tantalising, alluring array of top quality beers from all over the world, not to mention a climate-controlled cellar for its top end wines. As Nick O puts it: "Arriving at The Robin Hood in Waverley is routine but dragging yourself away is far more difficult."

Bloodhound Bar – Fortitude Valley remains Fortitude Valley, particularly on its heaving weekend nights. But it's also home to a steadily growing number of quality venues with great beer as part of their offering. One of the latest and greatest is Bloodhound, opened by the team behind The Burrow in Westend, which has breathed elegant new life into a 130-year-old former grocery building. As the Wine Republic team opens a third store and Slowbeer prepares to open a second in Fitzroy, Kerry McBride looks at the little bottleshops thinking big. read on Last week, we kicked off a tour of some of Adelaide's craftiest beer gardens on a mission to find out what makes a beer garden great. Here's part two, as Matt King checks out another half dozen combining craft beer with al fresco action. read on 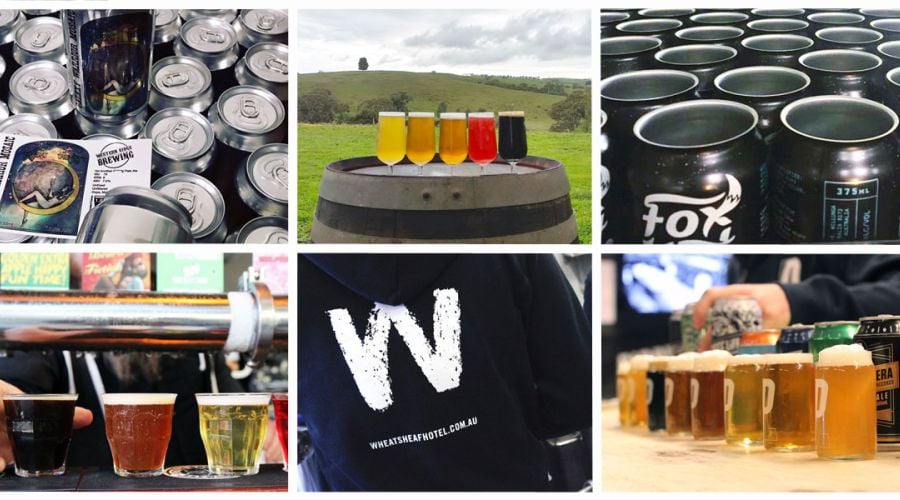