Midnight Sour by Carwyn Cellars has become a legendary event in Melbourne, bringing sour beer fans out in droves for a mouth-puckering good time.

From midday until midnight, the chime of the clock each hour will see a different sour beer hit the taps, until finally the hands of the clock both point to twelve, and midnight ushers in the crown jewel of the night. And to keep suspense high, the beers remain top secret until the moment they're tapped.

The seventh annual Midnight Sour is upon us, and this time Carwyn is teaming up exclusively with a single (legendary) brewery to feature across all 13 Midnight Sour taps - Garage Project's Wild Workshop. Expect all new releases, most of which haven't yet been poured in Australia, and some of which are making their worldwide debut on the day. And as sour icing on the funky cake, GP founder Pete Gillespie Wild Workshop head brewer Dave Bell will be on site from 5pm, talking sours and shooting the breeze.

The Carwyn team will also be setting up a Lambic Bar on the beer garden taps. While the hourly Midnight Sour taps remain a surprise, the Lambic Bar (where no doubt everyone will be hanging out between the hours) is a little more transparent...

AT THE LAMBIC BAR: 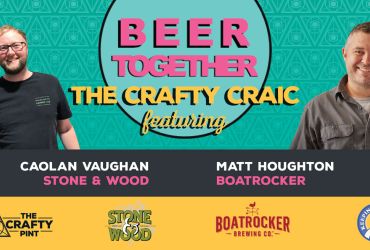 Beer Together: The Crafty Craic ft Boatrocker and Stone & Wood