The residents of Townsville are generally straight shooters who call it like it is. (They literally live in a place called towns-ville, after all.) But when it comes to Castle Hill, the natural landmark that stands proudly in the middle of town, some of the locals have taken to calling it a “tiny mountain” - even if it technically falls a little short of the requirements.

Just one and a half kilometres away from the majestic protrusion of pink granite, Tiny Mountain Brewery has taken on the landmark’s nickname as a badge of honour. The brewery even keeps up the propaganda, with mini murals on the walls boasting how close Castle Hill is to being a mountain – it falls short by just ten mud crabs, or 4.2 bar stools, or 1.6 brewers (which are really the measurement standards we should be using for all things).

As well as its proximity to Castle Hill, the brewery is adjacent to the CBD, a stone’s throw from the water, and just down the road from North Queensland Stadium. The location could hardly be more accessible; even in a place like Townsville, where you can travel across town with an ease that would make big city folk weep, this is a prime spot.

When you approach the brewery from Palmer Street, you find yourself glad the building is set back from the road so you can take it all in: the large Broadway-style sign, the powder blue front wall, the beer garden with festoon lights, and even a view of Castle Hill itself off to the left. Somehow the design manages to blend together a Broadway theatre from the 20s, an ice cream store from the 50s, and a suburban backyard from the 90s. Glitzy and glamorous; quaint and quirky; fun and familiar.

The interior brings more of an industrial feel to the party, as the high-ceilinged venue space and working brewhouse merge together without even a glass partition to separate them. Don’t be surprised if you see bartenders and brewers high-fiving each other while they work – it’s that kind of place. But, even if you’re not there at the right time to see the brewers toiling away, you can still gather round communal wooden tables and sip on beer that’s only travelled a few metres before hitting your lips.

The Townsville locals’ love of beer is well entrenched. When your summer days feel like you’re taking a hot shower, and your winter days are the envy of the rest of the world, a cold beer is a year-round delight. It’s only natural, then, that Tiny Mountain – one of Lion’s growing number of brewpub-style operations alongside Eumundi, Byron Bay and Bevy – looks to accommodate all kinds of drinkers.

Those simply after a few cold ones to beat the heat can rely on the crisp Refresh Lager to keep them hydrated, or turn to the Cowboys Castle Kölsch for that perfect combo of beer and footy.

The drinkers who are after approachable beers but also want to try new flavours can start on Pacific Ale, Tiny Mountain’s easy-going flagship Aussie pale ale, before having a crack at a seasonal fruit sour Quencher or a roasty dark beer. And, of course, there’s always the option of trying a flight of different beers on a custom-made wooden tasting paddle.

For those punters on the hunt for flavours that challenge the palate, they also make small batches of new beers that they rotate on the taps. The brewers get to experiment and play around. The adventurous drinkers get to try something new. Everyone wins!

While beer obviously takes centre stage at Tiny Mountain, it’s hardly the only taste catered for. As well as a generous range of wines, gins and whiskies, the bar staff serve up a menu of creative cocktails that changes with the seasons. Whether your group includes non-beer drinkers, or you simply want your tastebuds to go on a journey, you can avail yourself of the diversity of drinks on offer.

Whatever you’re drinking, don’t forget to shore up your stomach: inside, there’s the Tiny Tuckshop, a food trailer that’s a little bit fancy without being snobby; out in the car park, local food trucks bring their wares to tempt those making use of the beer garden.

While it’s a large space, Tiny Mountain is far from impersonal, with local residents, tourists and FIFO workers alike mingling and the venue also backpacker-friendly, family-friendly, dog-friendly… you get the message.

It’s a place where you can enjoy a big beer experience in a medium city where they value small town hospitality and are proud of their tiny mountain.

The rise of the brewpub and taproom model is one of the most striking aspects of the changing beer landscape in Australia. And it's an area in which the world's biggest brewing companies and their brands are playing too. 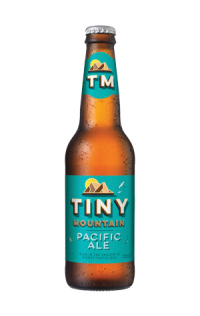 Pacific Ale is a name that’s entered both the beer lexicon and the hearts of many Australians over the past decade since Stone & Wood's original carved a swathe through the country's palates. As their flagship beer, and the one you'll be able to find in pack across the country, the Tiny Mountain team offer up their take on what's become increasingly seen as a style: a 4.6 percent ABV pale ale featuring hop varieties Galaxy and Vic Secret that's about as sessionable as they come and with summer… Read more
Golden Yellow 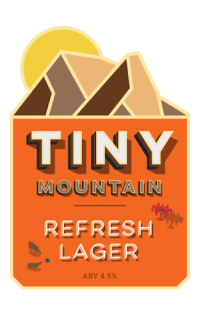 On a hot northern Queensland afternoon, drinking a good lager can feel like drinking from the fountain of youth. The aptly named Refresh Lager draws inspiration from the rice lagers of the American pre-Prohibition era. Rice was first used in beer as a cheaper alternative to malted barley, but over time people came to realise it can lend a dry edge and work wonders in giving beer a crisp finish. With a delicate flavour that straddles fruity and bready, as well as a touch of sweet candied banana, Refresh… Read more
Pale Yellow 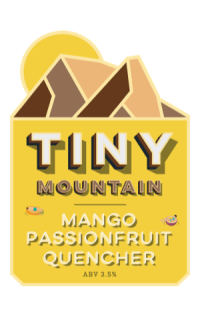 Tiny Mountain’s Quencher series is a simple concept with an abundance of possibility. Take a Berliner Weisse soured with lactobacillus for a pleasantly tart base and balance the flavour by adding seasonally available fruit from local suppliers. Or if that’s too fancy for ya - make a sour beer and chuck in some fruit from down the road. The first cab off the rank in the series is the Mango Passionfruit Quencher, which takes advantage of the copious amount of mango in NQ. A big mango nose (which,… Read more
Pale Yellow Want to make friends in Townsville? Walk into a pub and say: “Up the Cowboys!” Cowboys Castle Kölsch is brewed for the members’ bar at the new North Queensland Stadium, which is called - you guessed it - Cowboys Castle. (Since Castle Hill is a big part of Tiny Mountain’s story, we’ll forgive the mixed metaphor of "Cowboys Castle" and just enjoy the wild west/medieval mashup.) The brewers used the classic German Kölsch ale yeast to keep it easy-drinking, some delicate Old World… Read more
Golden Yellow