There’s a famously absurd song by the name of There Was An Old Lady Who Swallowed a Fly. Written more than half a century ago, it has captivated generations of children with a nonsensical narrative that follows an elderly protagonist who, having consumed the insect, attempts to remedy her malaise in an unorthodox way: by swallowing a spider.

Now presented instead with an arachnid problem, she elects to eat a bird. A cat comes next, then a dog, and on it goes as she consumes creatures of increasing size. The song reaches an inevitable crescendo when the woman meets her demise in a final act of preposterous gluttony: attempting to devour a horse.

It’s all nonsense of course but, like any decent folk song, dig deep enough and you’ll find enough crumbs to feed a moral tale. Here is a simple story of an idea that starts out small and manifestly manageable but quickly balloons beyond the original boundaries. There must be days when Johnathan Hepner and Clint Elvin ponder their boundaries and end up feeling as swollen as the old woman, for they have expanded greatly in a short space of time.

In 2016 they opened a bottleshop in Marrickville called Bucket Boys which quickly established itself as one of the premier beer destinations in Sydney. But what was just a bottleshop soon became a bar. Then what was a bar and bottleshop also became a distributor. But why stock it, sell it and ship it when you could also brew it? Consuming all parts of the beer supply chain like a buffet, Bucket Boys became a brewer too.

In truth, brewing was always part of the original plan. They don’t have their own brewery, but that’s no hurdle these days and as far back as the bottleshop’s pre-launch event they served their own beers: a strong Belgian Dubbel and a Grätzer – the obscure smoked wheat style from Poland – followed by a Red Stout. Those uncommon styles gave an early indication of where they wanted to be flexing the muscles of their brewing arm: niche stuff, small volume, fun to make and interesting to drink.

The duo that actually comes up with most of the beer recipes and does the brewing is Ben Miller and Jay Cook, accomplished homebrewers and longtime associates of Johnathan and Clint. This slightly unusual arrangement – a kind of in-house outsourcing – puts the Bucket Boys brand in a position unlike many others in Australia.

Perhaps the best comparison is with a record producer where, although they’re not playing all the instruments, their fingerprints are found at every step; development, distribution, artwork, networking, launches. They’re always very active behind the scenes, bringing into play the perspective of the whole supply chain and guiding things where they need to go. But because brewing is not the bread and butter of their business, they don’t feel pressured to be the headline act. It's why on their beer labels you’ll see the words “Buckets Boys presents…”, the collaborations acting as a platform to try to help elevate the artist, be it Ben, Jay or another brewery.

Furthering the analogy, they’re not the kinds to be bound by specialising in a single genre like rock or rap, pale ale or porter. If anything they’re more interested in World music, where diversity is at its greatest and the range extends far beyond what you’ll find in the popular charts. The result has been that they’ve worked with breweries across the country – from the Illawarra to Orange, Tasmania to the Mornington Peninsula – and created beers that have resembled, if not outright mimicked, everything from porridge to piña colada.

One theme, if there is one to thread, is that no two Bucket Boys beers are the same, a trait that also serves to help keep their beers in demand. New beers are released monthly, roughly, and are typically dispatched to several of the best beer spots up and down the East Coast, leaving just enough time for it all to be sold before the next one comes calling.

And that’s a schedule that seems just about manageable. After all, it’s just a couple of guys who opened a bottleshop that swallowed a bar that swallowed a distributor that became a brewer. They’ve undoubtably got more ideas and an appetite to sate, but there’ll be time for that. They know how the old tune goes, they know not to take on more than you can chew.

Two years on from publishing our Crafty Crawl guide to Sydney's Inner West, things have grown so fast we're having to revisit it. Here's a new hyper-local one focused on Marrickville with a broader Crafty Sprawl to follow. The Germans have long proven that sausages and beer go well together, with their timeless wurst & Weiss combination the default setting for any hastily put together Oktoberfest event. So it’s not new ground Bucket Boys are covering in their collaboration with the folks from Dulwich Hill’s The Sausage Factory, but ground that perhaps doesn’t get the consideration it merits outside of Munich beerhalls. The brief for this beer essentially came in two parts. The first was to make something… Read more
Golden Yellow Most people’s idea of a windfall is likely to be something monetary in nature; winning the lottery, finding a fat wad of cash or discovering that the second-hand piece of art you rather dislike is actually worth a ridiculous fortune. But taken in a more literal sense windfalls arose from nature rather than commerce: a bounty of fruit blown from a tree by the wind to be received by grateful creatures below. That foraging-type aspect is the inspiration behind Windfall, a series of collaborative… Read more
Pale Yellow 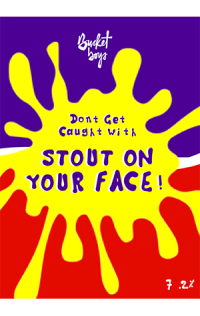 Bucket Boys Don’t Get Caught With Stout On Your Face

If imitation is flattery there’s a certain multinational confectioner that ought to be well chuffed were they to pop into Bucket Boys and taste this beery homage to the iconic Cream Egg. Don’t Get Caught With Stout On Your Face is a double milk stout that’s so rich with cacao, smooth with vanilla and luscious with lactose that you might just reckon all they’ve done is melted down a bunch of chocolates and served it on tap (just so we’re clear: they haven’t). There’s just a tiny touch… Read more
Dark Brown