As Australia’s beer industry continues to grow, there’s a lot to be said for having a close knowledge of what the beer scene looks like in other countries. The rise of craft beer is an international affair and local brewers with their fingers on the pulse of beer across the globe are well placed to bring those lessons home.

When it comes to frequently flying brewers, few ratchet up the kilometres like Adam Betts of Edge Brewing Project. As the founder of beer importer and distributor Northdown, Craft Beer, Adam regularly finds himself in breweries across the globe. Some might even suggest he launched Northdown merely as an excuse to collaborate with his favourite brewers, especially given the operation is responsible for bringing several beer geek favourites into Australia, among them Evil Twin, Omnipollo, Mikkeller, Amager Bryghus and 3 Fontenein.

Not long after launching Northdown in 2010, Adam began thinking about taking his homebrewing talents to the world. And he had some high quality mates to call upon for support, not least Christian Skovdal Andersen, the head brewer and co-owner of Denmark’s Beer Here, whose beers Adam had introduced to Australia.

The two of them began brewing beers together as gypsies, both in Australia and New Zealand, each release decorated with Christian’s unique hand drawn labels. Then, half a dozen collaborations later, Adam felt it was time for his own label. With that, Edge Brewing Project was born in 2013.

It didn’t take long for beer nerds and experts alike to start taking notice. In 2014, the brewery’s flagship lager, Cool Hops, was declared best pale lager in the world by beer rating site RateBeer. The same accolade was bestowed on the beer at the 2015 and 2016 International Beer Challenge in London.

Soon, restaurants began taking notice too. In early 2016, the restaurant voted best in the world multiple times, Noma, included an Edge beer on the menu at its Australian pop-up, alongside the likes of Two Metre Tall and Grifter Brewing Co. The initial invitation from the team at the Danish restaurant came as such a surprise Adam assumed it was either a scam or a joke courtesy of his old sparring partner at Beer Here.

Part of the reason for Noma’s interest was a shared focus on highlighting native – and often unusual – ingredients in their recipes. The collaboration lives on, in a way, as Edge has since launched a Restaurant Series, which has included creating a sour ale with regional Victorian award-winner Brae, featuring ingredients from the restaurant’s gardens.

The prevalence of Edge beers in fine dining restaurants – certainly, a far higher percentage of Adam’s beers are found in non-traditional beer venues than most of his Aussie contemporaries – isn’t the only way in which the brewing company, now run by Adam and his partner Michelle Vanspall, stands apart. There's the focus on brewing pretty much nothing other than lagers, imperial stouts and sours – and the black van complete with taps in the side that rocks up to beer festivals.

And then there's the brewing company's setup itself. While most businesses that start out as gypsy brewers see it as a stepping stone towards opening a brewpub or production facility, Edge embraces its lack of a brewery. It allows Adam to continue brewing small batch beers, usually at Red Duck, Barossa Valley Brewing and frequently overseas, leaving only Cool Hops as a mainstay.

That said, the hunt has begun for a new home. But not because Edge’s time as a gypsy is up. No, instead, it’s a barrel room Edge is after – and a space in which you can drink right next to them.

It's been another successful excursion to the International Beer Cup in Japan for Australian brewers. Both Mountain Goat and Edge picked up gold, silver and bronzes with Brisbane's White Lies completing the picture with a bronze. 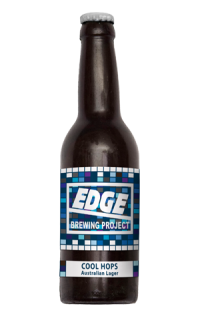 The sole beer in Edge Brewing Project's core range has had quite the storied life. Whether you remember its earliest labels – a cartoon hop in shades riding a surfboard, courtesy of past collaborator Christian Skovdal Andersen of Beer Here – or picked up on the many trophies and accolades the beer has picked up globally over the years, Cool Hops has certainly earned its place. In keeping with the brewing company's "lagers, imperial stouts and sours" ethos, it's a lager, albeit one with… Read more
Golden Winter always brings a glut of citrus fruit and, if their most releases are anything to go by, Edge Brewing Project seem intent on ensuring none of it hits the ground. Brewed in collaboration with the Collingwood fine diners of the same name, Ides is designed to kickstart a meal. The aperitif uses a pilsner base then adds ruby red grapefruit and honey to create a beer that’s largely light and refreshing, where the bitterness balances against the sweetness and has a light citrus twist. Mimosa is… Read more
Golden Yellow Edge are no strangers to brewing sours or lagers (in fact, aside from the odd imperial stout, you could call it their raison d’etre) and they’ve used both styles as colourful canvases upon which to explore flavour. For winter 2019, they've let both an imperial lager and an imperial sour out into the world, both with the same ABV of 7.2. The aptly named Hannibal is the third in a trilogy of ever boozier red lagers, following Cereal Killer and Psycho Killer. There’s a mix of rich, biscuit and… Read more
Red 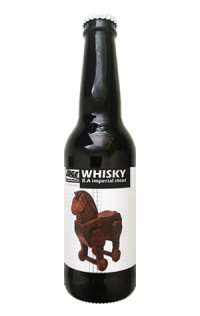 Adam Betts' Melbourne-based gypsy brewing operation tends to focus on creating lagers, stouts and sours – something of an anomaly in a beer landscape in which hop forward ales still dominate. In the stout category, Edge's Stagger Lee is their best known, as potent as any Australian representation of the classic style, and the multiply barrel-aged, magnum bottle only, Don’t Fuck With Joe expression saw them ratchet up the booze and complexity, albeit in a miniscule 100 bottle release. Here, 100… Read more
Black 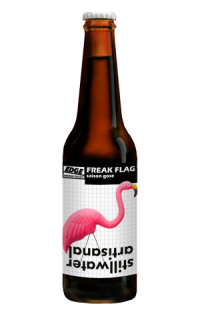 One of the advantages of being both importer and brewer is the opportunities that present themselves to create collaborations. The ExperienceIT/Nomad Brewing team likes to take full advantage, as has Adam Betts of Northdown, Craft Beer/Edge Brewing Project over the years. So, when Brian Strumke from Stillwater Artisanal was back in Melbourne for Good Beer Week, he and Adam headed to Red Duck in Ballarat to make use of the brewery there for another co-brew. It's one that appears to combine a couple… Read more
Pale Yellow While in WA for the inaugural Perth Royal Beer Awards Carnival, we bumped into a Crafty Cabal member who's also a homebrewer. He was eagerly discussing his intention to take the Brut IPA style currently fadding its way across the country in a new direction and brew an IPL. Sadly, it was a bubble we had to burst as we knew Edge had already given it a whirl and had a can awaiting delivery to Crafty Towers. In the current climate, it was, of course, only a matter of time... There are various nods to… Read more
Pale Yellow Nick Cave's spin on old folk tune Stagger Lee is many things: a highlight of his live shows; one of the more radical covers you'll come across; one of the most darkly wicked songs even he's put out across his decades of being darkly wicked. It's also the name of Edge's imperial stout, so chosen because it was the sort of reference – a "bad motherfucker" – that fitted the biggest, baddest beer in their lineup. Well, at least until they released magnums of a barrel aged version that also… Read more
Black The second of two sours in the recent trio of new releases from Edge is Fruit Salad. It looks like it could be the start of a Fruit Salad series (which may prove to be something of an annoyance for readers with kids of Wiggles-watching age) that will see a collection of different seasonal fruit added to the same base beer. In this case, while the make up of the half dozen fruit isn't stated, the appearance of a demented strawberry on the can suggests at least one. Whatever is accompanying said berry… Read more
Golden Yellow Edge has released plenty of lagers over the years and, in doing so, has attempted to show just how diverse the broad church can be, rather than simply the pale lager/pilsner style that's become shorthand for the style. Toast follows in a lineage of Edge beers that includes Cereal Killer and its recent follow up, Psycho Killer, in that it's one to which Adam Betts has added a basket full of different grains. So, while it's not Toast Ale, it does have many of the ingredients with which you could bake… Read more
Golden Yellow Avowed "lagers, sours and stouts" gypsy brewer Edge has a run of four new and returning beers coming out in quick succession as we head towards winter. And they're made up, unsurprisingly, of a lager, two sours and a stout. Amalgamation belongs in the middle group although, as with the beer Edge founder Adam Betts created with Victorian restaurant Brae, its sour side is a very gentle one. The lactobacillus within this dry-hopped Berliner Weisse, to give it its full title, delivers more… Read more
Pale Yellow To the ever-expanding world of hazy, New England IPA style beers comes a new addition from Edge Brewing Project. In keeping with their ethos, it's not an IPA(le) but an IPL(ager), albeit one that looks to reach to a similar end point via slightly different means. To create OJ, they've loaded the beer with hops known for their tropical characteristics and added a stack of navel oranges from SA's Riverland region. The outcome is a beer that's, unsurprisingly, fruity as anything: orange and mango,… Read more
Golden Yellow Cereal Killer is one of many lagers released by Edge Brewing Project over the years and also one of many beers not really like anything else being brewed in Australia. It's a lager that put a melange of grains and rice into the mix to create a red hued, malty beer. Psycho Killer, as the name suggests, is its bigger sibling. It still comes carrying the contents of a health food store's cereal section plus a few specialty malts, not to mention some Aussie and Kiwi hops, but does so in a package weighing… Read more
Red 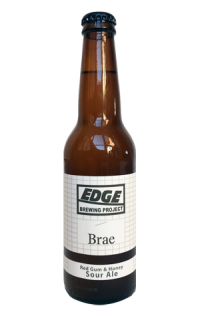 Over the years, Edge Brewing Project has carved out a niche as a friend of some of Australia's finest restaurants. Not only are you more likely to find their beers on the drinks lists of such places than most brewers but you may well find them making beers with and for them, such as this collaboration with lauded Victorian outfit Brae. Using ingredients from the restaurant's own surrounds – namely honey and red gum flowers – this entry in the Restaurant Series layers them atop a gently soured… Read more
Golden Yellow 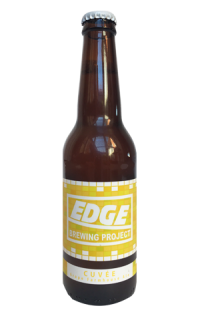 From the very earliest days of Edge Brewing Project, Adam Betts has enjoyed working outside beer's traditional homes. That approach led him to this partnership with Born & Raised Wines in Sunbury. Together, they picked sauv blanc grapes and left them to wild ferment on skins for 62 days to extract phenolics and tannins. While that was taking place, a farmhouse ale brewed with both saison and champagne yeast was brewed ready to be combined with the the fermented grapes to develop further. Inspiration… Read more
Pale Yellow