A few years ago, on a Crafty Pint trip around Tasmania, it was impossible not to notice a new brewery's name popping up seemingly wherever we went. Whether it was pouring on tap or found in the hands of the customer in front of us as a bottleshop, Little Rivers had certainly wasted little time making its presence felt.

It was some surprise, then, to discover on arriving at the brewery's home in Scottsdale, in the state's northeast, that co-owner and head brewer Chris Carins was brewing all of those beers on what wasn't too far removed from a glorified homebrew setup. There, on a 200 litre brewery built with his uncle's welding skills and repurposed winery tanks, he was running triple brew days before packaging by hand and, along with partner – and now wife – Jess, handling all deliveries too.

These days, things have changed somewhat at their Scottsdale home. Having got off to a flyer – at the time, they were the first new brewery to open in Tasmania in a few years – they soon realised this wasn't sustainable. So, in went a 2,000 litre brewery in October 2015 and down went the hours former winemaker Chris had to spend on the tools each brew day.

While the brewery has expanded, the ethos driving Little Rivers beers has remained steady. Perhaps unsurprisingly for a brewer who spent 12 months learning the ropes at Queensland's Burleigh Brewing, Chris tends to focus on approachable and traditional, frequently European inspired, beer styles. Like most Tasmanian breweries, he enjoys showcasing locally grown hops – not just the varieties coming out of Hop Products Australia's Bushy Park but also those from Edward's, the last hop farm still operational in their part of the state, producing Super Pride and Pride of Ringwood for Coopers and also the location of some wild Columbus Chris has used in his fresh hop beers at harvest time.

Every time they brew a batch of beer, they produce the equivalent of one litre for each resident of their hometown so it's little surprise you can find their beers across the entire state and within some of the regional chains. But it's closer to home they've really been taken to heart. The all Tasmanian beer, cider, wine and spirits Weldborough Hotel sells more of Little Rivers' beer than anyone else's and their bottles fly out of the fridge at other venues in the region like The Hub in Derby.

They've forged relationships elsewhere too, most notably with their sponsorship of the Enduro World Series mountain bike race, for whom they brewed an XPA that proved so popular it joined their core range, but also within the region's golf and footy clubs.

Yet, while you can find their beer pretty easily across Tasmania, the best bet is to head to the cellar door. Not only will you taste the beer at its freshest and, more than likely, get to meet Chris, Jess and their family, but the drive to Scottsdale, no matter what route you choose, takes you through a truly stunning part of the world. One which the Little Rivers team is happy to be injecting with new flavours. 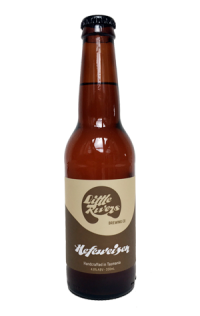 On the past visit to Tassie during which we first came across Little Rivers we mention in the main brewer write up, it was the Hefeweizen that seemed to pop up most often. Wheat beers have traditionally proved a tough sell in Australia (at least, traditional ones have – American wheats fly off the shelves) so this would appear to be one that was bucking the trend. Its Bavarian in inspiration, full-bodied with lots of candied banana and sweet, sherbety lemon aromas alongside those clove like spices,… Read more
Golden 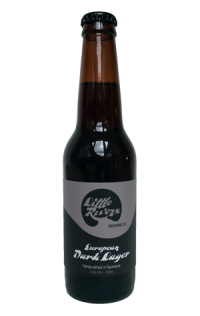 One of many Little Rivers beers to take inspiration from Europe is this dark lager. It's a pretty gentle drop; within its cola like body you'll find chocolate, caramel and biscuit malt flavours along with a touch of coffee. Bitterness is kept to a minimum, assisting in a finish that's cleansing and dry rather than bitey.… Read more
Dark Brown 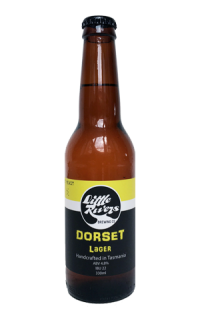 The Dorset Lager was added to the lineup a few years after the brewery launched and proved such a hit with locals it was soon one of the brewery's biggest sellers – helped, perhaps, by the fact it's named for the local council region in which the brewery resides. That it's brewed with an eye on drinkers outside the craft beer bubble no doubt helped too. Tagged a "summer lager", it pours a crystal clear golden colour and offers up spicy, lime and nettle hop aromas. You'll pick up malt… Read more
Golden Yellow 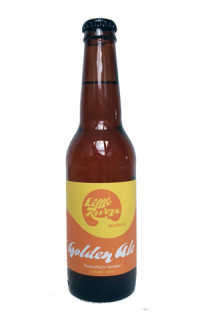 Little Rivers' Golden Ale is a beer that delivers what you expect from the style. Clear and golden in the glass, there's a soft grainy malt character and only the barest of fruity hop action or, indeed, bitterness. It's an easy, undemanding step away from the mainstream towards the rest of the brewery's range.… Read more
Golden 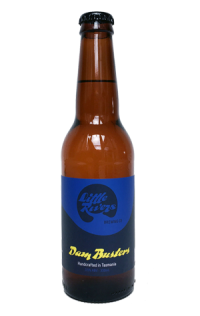 Dam Busters is the brewery's entry into the mid-strength market, in part with their home region being such a popular spot with mountain bikers; its name comes from a local trail, after all. Local Tassie hops complete the homespun picture, used in large enough quantities to fire off tropical and citrus aromas and pack a bitter punch bigger than the majority of its stablemates.… Read more
Pale Yellow 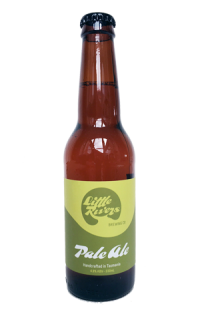 The brewery's biggest seller (as pale ales tend to be for those that brew them) has been a mainstay at Little Rivers from the off. American in style and brewed with Tasmanian Cascade hops that add floral aromas with a touch of citrus and a drying bitter finish, it also comes with honey like malt characters, making it fuller and sweeter than many contemporary Aussie pales.… Read more
Golden They're fans of the outdoor life at Little Rivers in Tasmania's north-east and, rather appropriately, have put a couple of limited release beers into cans as the summer holidays approach. One sits roughly in the realm of a NEIPA – or East Coast IPA, as the brewers prefer – but comes with added rye alongside the Galaxy, Mosaic and Kohatu hops. It's Ryed The Tide and, with some caramel malts in there alongside the rye, it's a maltier affair than most of the hazy IPAs you'll have come across. You'll… Read more
Red The brewing team at Little Rivers has embraced the lacto life with the launch of its Sour Series. Kicking things off is a pair of kettle sours that may have started out in roughly the same place but end up as rather different beasts. With Berrylicious, the label might suggest a need to pucker up, but it's laden with so many berries the tangy, acidic side of the beer is very much playing second fiddle. You're given fair warning too: emptying a bottle into the glass is a stop-you-in-your-tracks moment,… Read more
Red 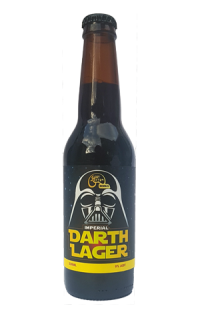 For the most part, Little Rivers, found in Scottsdale in Tasmania's north east, likes to produce traditional, European inspired beers. Among such beers in their core range is the Dark Lager, a softly spicy, malt led spin on the German Schwarzbier. And now it has a bigger cousins as, for the brewery’s winter 2018 release, they have created Imperial Darth Lager. Named for a particularly devoted Star Wars fan in the brewery, the seasonal is as big a beast as the character adorning its labels, weighing… Read more
Black As with many of their brewing peers in Tasmania, Scottsdale's Little Rivers started out with a core range that was focused on more traditional beer styles, particularly those with roots in Europe. Over time, however, the brewers have shown they're not averse to contemporary trends either – particularly when it comes to seasonals. And that's certainly the case with this East Coast IPA, a beer that fits neatly into the growing clutch of locally brewed hazy IPAs and has been loaded with Galaxy, Centennial,… Read more
Golden