What happens when two fishing mates return to the marina after chasing marlin all day and find there's nowhere to sit and enjoy a good craft beer while telling tales of the one that got away?

They simply decide to fix the problem by building their own brewpub at the marina.

It took co-owners Tony Fyfe and Craig Parsell less than 12 months from that lightbulb moment to open Hemingway’s Brewery at The Reef Marina in Port Douglas in June 2016.

As you might imagine, a brewpub called Hemingway’s has a few good yarns to tell. In fact, every ale has its own tale that describes an element of the region’s colourful past or the trailblazers who were part of it. Pitchfork Betty’s Pale Ale, for example, is inspired by a publican known to wield a pitchfork at rowdy patrons – but don’t worry, you won’t find her behind the bar, or the pitchfork for that matter.

The light and refreshing The Prospector Pilsner is Hemingway’s most popular beer (and has gone on to win a Champion Beer trophy at the Australian International Beer Awards) and the core range includes the likes of Doug’s Courage IPA, 4 Mile White Lager, The Endeavour IPA, the mid-strength Watson’s Session IPA and Hard Yards Dark Lager.

The setting of this impressive gastro brewpub couldn’t be more idyllic. A large timber boardwalk overlooks superyachts moored in aqua waters with the mountains of the Atherton Tablelands rising in the distance.

It’s exactly what Tony and Craig envisioned. Now, when they return from a fishing trip yearning for that first beer, they are spoiled for choice – there are ten options on tap.

Hemingway’s opens daily from 11am, which is a good thing as the weather in Port Douglas (even at that hour) is, typically, perfect for drinking one of their brews crafted to suit the tropical climate.

While tourists make up a large percentage of the patronage at Hemingway’s – every year over 400,000 of them flock to this part of Far North Queensland (FNQ) – Tony says the brewpub is all about the local community. “We want the Port Douglas community to really own Hemingway’s,” he says.

The brewery team is on a genuine mission to educate the beer drinkers of FNQ with four taps on rotation featuring Australian and international craft beers and guest breweries a regular attraction. And, when you finish your education at the bar, staff will happily fill a two-litre growler or a one-litre can fresh from the tap for you to take home – think of it as a graduation ceremony.

With live music on Friday, Saturday and Sunday as well as a strong events calendar, Hemingway’s is a fun-filled venue offering plenty of entertainment year-round. Of course beer and entertainment is only part of the package with the venue very focused on its cuisine. The menu features a range of gourmet pizzas, burgers, tapas and barbecue-style fare. Much of the produce is sourced locally and the culinary team has infused Hemingway’s beers in many dishes. The ironbark smoked pork taco cooked in pale ale for 14 hours is a great example.

If you’re planning a party, a dedicated function space above the brewery with 180-degree views caters for small and large groups. And there’s more too...

Hemingway’s Brewery have since opened a massive brewpub in a 1400 square metre heritage-listed space at the Cairns Cruise Liner Terminal, where the majority of their production now takes place. They've also started canning their beers and started to get them into venues far beyond their home region, something likely to be helped by their showing at the 2019 Australian International Beer Awards.

It all makes for very exciting times on the FNQ craft beer front, and that's not a phrase you'd have expected to hear a few short years ago.

There's been plenty of talk about the rise of craft beer in Queensland in recent years. For the most part, it's been centred around the state's South East but, as Will Ziebell finds, it's gaining a toehold in the Far North too.

In late 2013, The Crafty Pint travelled with Mountain Goat to Cairns for the launch of their Summer Ale cans. It's fair to say, those cases were almost the only craft beer to be found in the region. Since then, however, much has changed.

A year on from his guide to the fledgling beer scene in Far North Queensland, Philip Goslin returned to Cairns to find some new openings. And here are his findings in a new Crafty Crawl guide to the best beery spots in the city. The Prospector Pilsner is the most popular beer in the Hemingway’s range: a Bohemian style pilsner designed for the Far North Queensland climate. It pours bright with a fluffy white head from which you'll be met with a wave of grassy, floral and herbal hop aromas familiar to anyone who's enjoyed such beers on their European travels (despite not using any European hops). There's plenty of broad, herbaceous bitterness awaiting the drinker on the palate too, wrapped around crisp, cracker like malts… Read more
Golden Yellow Designed to be an easy-drinking sessionable beer, Watson’s Session IPA (formerly Mrs Watson's Small Ale) is mid-strength (3.5 percent ABV) but certainly doesn’t taste like it. Using pale ale and caramel pilsner malts it is almost heading towards IPA territory from a malt-build perspective. The malts are balanced out with a big hop profile and an in-your-face aroma of citrus and pine. This American style ale is also dry-hopped so there is a bit of astringency to it. It pours a deep orange amber… Read more
Golden

Tap only at venue Pitchfork Betty’s Pale Ale is named after a Port Douglas publican known to wield a pitchfork against rowdy patrons. You won’t find anyone with a pitchfork in hand at Hemingway’s, but you might run into head brewer Anthony Clem who has been doing the heavy lifting in the brewery since mid-2017. Anthony has been tweaking a few recipes to make brews “more true to style” and with this American style pale ale he has dropped the bitterness back a touch so the fruity Australian hop characters… Read more
Golden Doug’s Courage IPA celebrates the spirited nature and fortitude of the Port Douglas pioneers. Tagged as an XPA, it sits apart from most of its peers on the market these days; while many brewers have decided XPAs should be in Balter's image – very pale, hop forward, and somewhere around 4.5 percent ABV), Hemingway's have gone bigger (a legacy, perhaps, of its original categorisation as an American IPA). For one, it pours a dark copper colour, which translates to a light caramel sweetness on the… Read more
Rich Brown 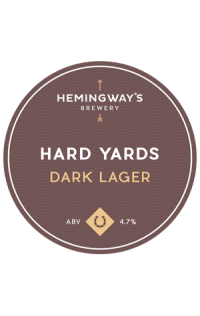 The Hard Yards Dark Lager is built upon a pilsner backbone, but it is the malts that do all the talking in this beer. Using a number of malts that you would typically associate with a porter, it is chocolate, coffee and biscuit characters that dominate here. The strong malt profile is backed up with a hint of bitterness from new world hops. It pours almost black thanks to the roasted barley with slight reddish hues. Despite the malt profile this is not a lingering heavy sweet beer but rather a light-bodied… Read more
Dark Brown Hemingway’s Brewery added the 4 Mile White Lager to its core range early in 2017. Named after the iconic Four Mile Beach at Port Douglas it presents a pale ‘sandy’ colour — not unlike the beach itself. Brewed with 50 per cent wheat malt it is quite cloudy. This beer is very lightly hopped. There are some grassy notes coming through on the nose, but the aroma is certainly more yeast driven. It has a fruity estery profile with hints of banana and a slightly tart dry finish that makes it perfect… Read more
Pale Yellow For the most part, it's been the breweries of South East Queensland that have been redefining how people think of the state's beer scene in recent years. But, at the 2019 Australian International Beer Awards, Hemingway's – who operate twin brewery venues in Cairns and Port Douglas – chipped in too, picking up a trophy for their Prospector Pilsner and a gold for this lager. And, if you want to enjoy success in Far North Queensland, knowing your way around a lager is no bad thing. Tunnel 10 uses… Read more
Pale Yellow Were it not for the fact they've already got an XPA in their lineup – Doug's Courage – you could imagine this beer slotting nicely into that slot. But you can't deny the name it has instead – 7th Heaven Tropical Ale – is apposite, inspired by the appeal of the breweries' tropical Far North Queensland home and describing its character too. Very pale and hazy, mango and passionfruit dominate on the nose, while it's light on the palate, leaving just a touch of lingering resinous tropical fruit… Read more
Pale Yellow A West Coast style IPA brewed on the East Coast and named after the ship that carried a Northern Hemisphere explorer around the planet, The Endeavour was part of Hemingway's strong showing at the 2019 Australian International Beer Awards, collecting a silver not long after being added to the brewery's lineup. Despite being based around just two American hops – Simcoe and Mosaic – it welcomes you with a multifaceted hop aroma (well, one of them is Mosaic, after all), one that travels from sweeter… Read more
Golden 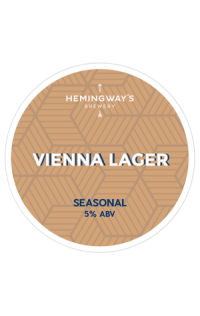 The Vienna Lager is a malt-driven lager. It has a typical lager backbone but is dry hopped making it a little unusual. It has a nice New Zealand hop aroma to it and a real bitterness with a dry finish.… Read more
Golden