It was way back in 2005 that O’Brien Beer released Australia’s first gluten free beer, yet the brewery’s story starts much earlier. In fact, you need to go back to 1998 – the year John O’Brien discovered he had coeliac disease.

For John, it was a discovery that meant giving up a few things, among them the building blocks of beer. And, while John felt pretty sure he’d be fine without most breads and pasta, he wasn’t too sure how he’d go losing beer.

Despite flirting with cider and wine in the first few years living without gluten, John held steadfast in his love for beer. So, looking for a way to drink beer again, he decided to learn how to homebrew.

This meant researching and reading whatever he could about beers brewed without either barley or wheat. Eventually, John took those lessons to his backyard and, while he may have suffered from some fairly poor first attempts, eventually he found a method – and some grains – he was happy to brew with.

Primarily among those grains was sorghum, a crop not often associated with beer in Australia. Here, sorghum is best known as a livestock feed, but elsewhere it’s a grain with a long association with beer. In parts of Africa where the grain is widely grown, sorghum has been used for hundreds of years to make beer, including Guinness, and John started using it to brew his own.

Sorghum became the basis of his homebrew and though O’Brien does use other gluten free grains – millet in particular – it remains central to the brewery’s beers.

Having overcome his first hurdle – making a beer he enjoyed drinking – John started to wonder how many other former beer drinkers who wanted to be current beer drinkers were out there. Quite a few as it turns out: an estimated one in 70 Australians is believed to be coeliac, though many of them are undiagnosed.

By 2004, spurred by a belief there were enough gluten intolerant drinkers with their minds still set on beer, John started Rebellion Brewing Co and Australia’s first ever gluten free beer range: O’Brien Beer.

The first batches of those beers were contract brewed but, by 2007, the brewery had invested in its own system and moved to Ballarat. Today, the brewery sits on a much larger site, but the regional city remains O’Brien’s home.

Despite being more than a decade old, with major awards on the mantelpiece and available widely across Australia, O’Brien still faces some of those same challenges from John’s early days brewing.

Sourcing raw grain, testing germination quality and then getting the grain malted is a process most breweries don’t have to worry about. Yet, in each step of the way, O’Brien must be involved, and the brewery has specific requirements around how it brews its beer.

Due to sorghum’s annual harvest, the brewery also must think well in advance about what it wants to brew. Considering the breadth of O'Brien's core beers, plus an increasingly large roster of seasonals, it’s unsurprisingly a process with its challenges.

Yet, according to John, it’s not his biggest. Instead, it remains trying to convince bottleshop, bar and pub owners that there are people out there who want to drink beer but can’t.

While restaurants are now acutely aware of the number of people who can’t eat gluten, bars and bottleshops have been slower to catch on. But, says John, it only takes one person in every pub to know a coeliac for the battle to be won. And, given he’s been on a mission to develop gluten free beer for Australians for two decades now, we’re pretty sure it’s a battle he’ll see through to the end.

Each summer, Ballarat attracts thousands of beer fanciers to its City Oval for its annual festival. But, with four breweries and a growing number a craft venues, there's plenty of reason for beer lovers to visit at other times.

Free To Brew What We Want

Greater awareness around coeliac disease and gluten intolerance is leading to more GF products hitting the market, including beers. As a new gluten free brewery in Victoria nears opening, we find out more from brewers and researchers.

Ballarat is a city with a fine heritage when it comes to beer and brewing. It's one that continues today, where pioneering experimentalists rub shoulders with blenders, brewpubs and classic boozers.

One of the most eye-catching moments at the 2021 AIBAs was O'Brien Beer's six golds in the Specialty category. We chatted to the founder of the GF beer pioneers as they come to the end of an equity crowdfunding campaign. O’Brien Beer’s XPA was added to the brewery’s core range in 2021 and it’s one that sits in a unique position for the style. For one, like all of the brewery’s beers, it’s gluten-free, using millet and sorghum over the likes of wheat and barley. But also making it an XPA outlier is the fact at a rather modest 3.8 percent ABV, it's quite a bit lighter than many in the category. Where it’s still very much an XPA though, is with the hops leading out in front, with Citra and Cascade providing… Read more
Pale Yellow If you've only every come across one gluten free beer in your time, there's a good chance it will be this one. The bright green-liveried pale ale can be found in fridges and on shelves of retailers across the country and, if a venue's only going to offer up one gluten free beer, it often plumps for this one. Pouring a bright, pale golden, and, from the cans launched for summer 2018/19, you'll pick up a pretty punchy sweet citrus and pine character on the nose, followed by some pleasant peachy and… Read more
Golden Yellow The Premium Lager is the O'Brien beer that's becoming as ubiquitous as the flagship Pale, found on shelves and fridges at major retailers across the country as well as turning up as the GF offering on many bar and restaurant drinks menus. Golden in colour, the hops deliver the sort of spicy and floral aromas found in traditional European lagers and a herbal character on the palate, where you'll detect a little smokiness too, which comes from the O'Brien team roasting some of the sorghum grains to… Read more
Golden 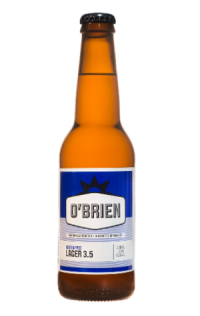 O'Brien added a mid-strength to its lineup ahead of summer 2017: a pale lager weighing in, as the name tells you, at 3.5 percent ABV. A pale golden pour, it's not just the alcohol content that's restrained, with the hops adding just a flicker of floral character to a light and grainy malt base, with a touch of smokiness derived from the brewery's in-house roasting process making an appearance too.… Read more
Golden Yellow 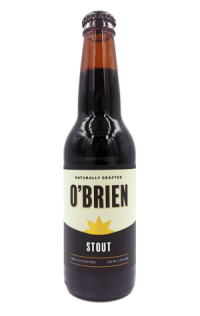 Slowly but surely, beer lovers with coeliac disease or who are otherwise gluten intolerant are being catered for by a greater number of local brewers. For years, however, their options were far fewer, with the main supplier for their particular needs being O'Brien, the Ballarat brewery that's been producing nothing but gluten free beers since 2005. In 2019, almost a decade and a half on from their first release, the brewery team has been undergoing a little change, releasing their first cans and… Read more
Dark Brown 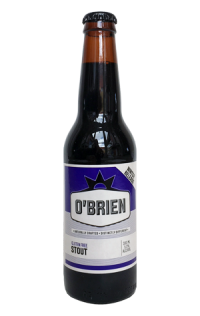 As awareness and understanding around Coeliac disease and associated intolerances grows, we're seeing more focus on gluten free alternatives in all walks of life, not least beers. The pioneer in this field in Australia is O'Brien, the Ballarat brewer that's been releasing a range of beers typically based around millet and sorghum grain bills since 2005. Thirteen years on from the release of Australia's first GF beer, they've put out this Stout as their winter seasonal. Dark brown more than pitch… Read more
Dark Brown