When your brewing kit costs more to get up a mountain than it did to ship it from China and San Diego, it’s hard to doubt a brewery’s commitment to craft beer. Such was the task faced by Colorado expat Mark Hubbard when he found himself working in tourism in the Victorian High Country, near the Dinner Plain ski fields, and decided that one thing was missing: a brewery with a tap room experience.

As an avid snow sports fan, he was more than used to settling down with a good beer after a day on the slopes around Colorado and felt that Australia could similarly benefit from a well-positioned brewery offering pale ales and porters high above sea level.

So, halfway through 2015, Mark set the wheels in motion and found a building at Dinner Plain that could accommodate a space for brewing as well as a bar area for the punters. Add in the ability for skiers to ski right to the front door and it was a recipe for success.

But first they had to get the brewing equipment up the mountain: to a final altitude of 1550 metres. He enlisted a freight company to make the journey up the winding track that is the Great Alpine Road in the middle of a freezing cold day – and was soon faced with another challenge above and beyond the cost of this final delivery leg: the gear getting stuck halfway up the mountain as a storm set in. But Mark’s commitment was strong, proving that the brewery’s slogan – Beer Above All – was more than just a play on their location; after a few frantic phone calls and, quite probably, a few more grey hairs on the head, the brewery was delivered to the waiting brewhouse, some 12 hours after the truck first began its ascent.

Despite the difficulties in getting the equipment to the isolated mountain site, brewing was underway not long after, and the first beers were out by Easter 2016. Among the core range you’ll find the Powder Pale Ale, Brandy Creek Kolsch, Avalanche Amber Ale, Ice Horse IPA and Summit Stout. The theme is clear, with the surrounding mountain peaks and wintry conditions proving to be the perfect muse for Blizzard’s releases.

With the active lifestyles of High Country dwellers and visitors a key consideration, Mark chose to can the core range, rather than bottle it. That decision has enabled easier transportation of the beers brewed by former Tooborac and Rogue Wave brewer Chris Haren to nearby stockists, and encouraged visitors to pick up an easy six pack to take with them on mountain bike rides or up to the ski slopes.

In the tap room, cozy couches, tables, a fireplace and a mezzanine overlooking the brewhouse all come together to create a ski clubhouse effect, one where mates can settle in for a couple of beers after a hard day on the slopes.

With toasties and bar snacks available at all times, and plenty of space to gather for a few yarns with your fellow snow loving buddies, it’s easy to feel like Blizzard has been part of the Dinner Plain community all along. And, with far more ski slopes waiting to have a beer named after them, there's sure to be fresh inspiration for new beers just as often as there's fresh powder on the hills behind. Brandy Creek Kolsch is Blizzard's Alpine interpretation of this classic German style, brewed with Crystal hops from the USA and designed to be "very session-able and perfect on a summer's day in the mountains, as well as apres ski." It takes its name from the spot just a few minutes up the Great Alpine Road from the brewery that was the site of a gold mine from the 1860s. Very much the brewery's most approachable, entry level beer, its key characteristic is the sweet, creamy biscuit malts… Read more
Pale Yellow When you're based in the Victorian High Country, it's not just the wilderness and outdoor activities that you're blessed with: you also have access to locally grown hops. And that's something Blizzard took advantage of with its Powder Pale, which used Melba hops throughout to create a beer based around tropical and grapefruit aromas and flavours. More recently, however, after enjoying success with the Belgian-influenced Bladerunner, they switched to a Belgian house yeast and reinvented their pale.… Read more
Golden Take a look at the can and you'll discover that Ice Horse weighs in at the same ABV as its stablemate, the Powder Pale. Yet the former puts the latter's already pretty hefty hop load comfortably in the shade, both in terms of the variety and amount utilised. Here you'll find Cascade, Mosaic, Galaxy and Melba at play within its hazy, deep copper belly, delivering dank, piney, earthy and herbaceous flavours and a seriously bitter citrus peel finish.… Read more
Rich Brown Blizzard's Avalanche is very much a traditionally minded rather than US inspired amber ale: there's no wave of punchy hops here; it's all about the malt. While the hops (Cascade, Crystal and locally grown Ella) provide balance and a drying bitterness, they're very much supporting actors. taking centre stage is a range of specialty malts, which provide toffee, sweet biscuit and toasted caramel flavours and aromas in a beer reminiscent of German altbiers or English browns.… Read more
Red One might expect a microbrewery's lager to be its most straightforward beer, the one for staff to offer to those wanting something not too dissimilar to mainstream beers. At Blizzard, that honour goes to its Kolsch, with the 1550 Lager (named after the brewery's altitude) taking European pilsners as its inspiration and delivering some subtle complexities. Based around German base malt and locally grown (and rather unfashionable) Super Pride (of Ringwood) hops, the distinct malt character shines through… Read more
Pale Yellow There's a personal story running through Blizzard Brewing, starting with the reasons Mark Hubbard decided to launch the mountaintop brewpub in the first place. It continues with this beer, "A Beer for my Dear", as he calls it: brewed for his bride "while chasing his dreams". It starts out with the brewery's core range lager then adds lavender from nearby Harrietville. The new addition adds a floral, lightly perfumed aroma to what's otherwise a pretty line and length, malt led… Read more
Golden If you're visiting Blizzard Brewing's home in Dinner Plain during the colder months – as most people will be – and find yourself in need of warming from the inside, this is the beer tailor made for such occasions. As big in booze content and bitterness as anything in the brewery's regular lineup and darker than them all, it still manages to come across as bigger than the sum of its parts. Summit Stout pours close to opaque with a ruby tinge and a deep brown head – always a warning sign that… Read more
Black Victoria's High Country brewers have access to some of the country's largest hop farms. And they tend to take advantage when the harvest comes around, just as Blizzard has done with its fresh hop beer for 2017, one that name checks the Rostrevor Hop Gardens from which they sourced Galaxy hop cones. They're calling it a "North East Ale" to place its provenance clearly in the brewery's home region too. Initially a one-off, draught-only release, the beer has become something of a regular,… Read more
Golden 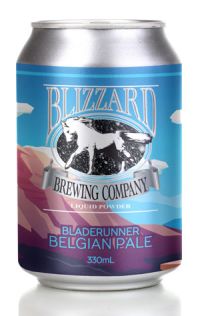 Having cut their teeth when it comes to producing Belgian influenced beers at their Dinner Plain home in the company of fellow High Country brewers for the 2016 Rule 47 collaboration, Blizzard has gone back for a second helping. Bladerunner uses the same specialty Belgian yeast but changes things up elsewhere by adding a bit more wheat and some rye too. Initially a summer seasonal, with a name and packaging inspired by a local cross country and walking trail of the same name, it maintained the brewery's… Read more
Golden Each year, the brewers of the Victorian High Country come together to create a collaboration beer. In 2016, the Rule 47 brew took place at newcomer Blizzard Brewing, with a collection of brewers making their way to Dinner Plain for the day. The beer showcases more than just brewers from the region: hops from Rostrevor Hop Garden are joined by Belgian malts and a Belgian yeast strain in what they've tagged, simply, as a Belgian Ale. In practice, that is a golden ale at the sweeter end of the spectrum,… Read more
Golden Yellow