For more than a decade, Warners at the Bay Bottleshop has been a premier craft beer destination for the mid New South Wales coast. It’s become a pilgrimage of sorts for seasoned craft beer drinkers, regularly attracting visitors from Sydney – a two-hour drive away – as well as those from even further afield in all directions. The reason for this is simple: instead of compromising between quality and quantity, it excels in both.

More than 1,000 beers from all over the world are cold stored in 16 fridges along the long back wall, from breweries as close by as Hunter Beer Co to as far flung as Denmark’s Mikkeller and Belgium’s Brouwerij Boon. Perhaps the most extensive of the international selection, however, are the ranges from New Zealand and the United States. Although there’s close to the full range of the usual suspects, such as Garage Project and Sierra Nevada, the real beauty lies in the rarer finds – those that you’ll unlikely see in many other bottleshops.

As for the Australian selection, the aim is to stock at least one beer from every brewer that sells wholesale thanks to a commitment to supporting local business. That doesn’t just mean stocking breweries large and small from all around the country, but also providing a selection of locally produced cheeses and pastes from the Hunter to match with the beers.

In fact, beer and food matching is something you can explore further at the adjacent Warners at the Bay restaurant. That’s right, this venue is no one-trick pony; rather it boasts bottleshop, restaurant, hotel with 50 motel style rooms and live music space all in the same complex. Better still, the family-friendly restaurant has been transformed into a craft beer destination in its own right, matching cuisine with carefully curated beers.

Here, 26 taps pour something for everybody, from familiar macro lagers to more exciting craft beers, each of which are suggested as match for a particular item on the menu. It’s a menu that includes a range of modern Australian cuisine, as well as a range of authentic Italian wood-fired pizza.

If any of the beers on offer tickle visitors’ fancy, they’re able to walk across the car park to the bottleshop and take some home for themselves. That’s even the case with draught only beers as the bottleshop has its own five-tap growler fill system. Usually, this echoes what’s pouring at the restaurant, although may differ slightly due to the extremely quick turnaround: no keg is tapped for more than two weeks to maximise freshness, although most run dry before a week is out.

The evolution of the twin venues should ensure a trip to Warners at the Bay continues to be a rite of passage for beer lovers, offering both a chance to indulge in culinary delights and quality craft beer as well as browse the renowned bottleshop. After all, thanks to the huge selection on offer, it’s possible to take your palate all over Australia, and indeed the wider beer world, without ever leaving this pocket of Newcastle. 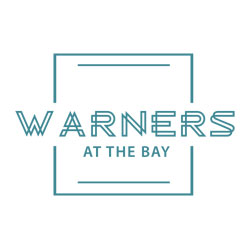 20% Off Growler Fills at Warners At The Bay