Now here's a beer that's got Crafty intrigued. Billed as Australia's smallest IPA, it's a 2.8% beer that somehow packs in a lot of flavour - including pretty fierce bitterness, according to brewer Shawn Sherlock when we caught up with him last month for an interview we'll be running on the site soon. According to Murray's, it's brewed with British malts, "carries a big, almost over the top hop flavour and aroma" and is coppery red in colour. Perfect with tandoori chicken or a tikka masala… Read more
Rich Brown

Fanny's back! The beer that made its debut on tap at The Local Taphouse's Great Australian Beer SpecTAPular had a genesis as unusual as the actual brew itself, with deliveries of ingredients held up by the Queensland floods, thus making it a race against time to have it ready for the festival. As for the beer, the Gold Coast brewers added everything you'd expect from an Anzac bickie - coconut, golden syrup, oats - to create a really rather unique beer. Equal parts cream soda, nuts, toffee and the… Read more
Golden

Given his regular musings online, one wonders if this is a beer based on Murray himself. Either way, when we tasted last year's batch, it found favour with Crafty. Big Brown Ales are a treat if done well (think Baird's from Japan) with everything - hops and malt characters - cranked right up for a palate-coating beer journey in every mouthful. We're yet to taste this year's version, which is the first time the Angry Man has ever been bottled as well as kegged, but are told it's "bitter up front… Read more
Dark Brown

It might sound like the return of Brigitte Nielsen, but this is in fact the latest release under Thornbury brewer 3 Raven's Uber range, one which sees them take their Blond (or Golden Ale, depending how you know it) as a starting point then head into strong lager territory. Looking towards Europe - in particularly Germany - it's a recreation of an altbier, albeit something of an Uber version of that (its subtitle "Sticke Alt" means secret altbier - the one you'd have to request from the… Read more
Golden 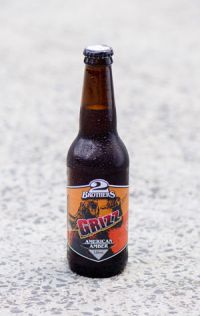 For Grizz, 2 Brothers returned to the land that gave them the inspiration to start their own brewery in the first place: the US of A. The beer that was originally introduced as a seasonal but has become a key figured in the 2 Brothers permanent lineup is an American amber inspired by Mack and Jack's Amber from Redmond, Washington. It delivers a great balance of rich, caramel and toffee malts with piney, earthy, citrusy and slightly spicy US hops, making for one of the best examples of the style… Read more
Red

You could have some fun with this one. Grab a mate, pour them a glass and offer it up without warning. Practically black, shot through with blood red tints if held to the light, and with a hint of tan in its head, they'll be certain they're about to tuck into a porter or lighter bodied stout. At this point, we should point out that this will work better if said mate has no sense of smell or a bad cold at the time, as otherwise the pretense will collapse well before the drink enters their mouth thanks… Read more
Black

This 2 Brothers seasonal release has previously only been available in draught form - and, being based on the Oktoberfest beer style, usually timed to hit taps around October. Given the Oktoberfest beers were spawned from the German Mí¤rzen style - a strong lager brewed in March to last through the summer when hotter temperatures could affect brewing conditions back in the Middle Ages - it makes perfect sense to release some in March too. So here comes The Chief in bottled form (plus a few kegs).… Read more
Golden

They've been feeling fruity up in the Victorian mountains, it seems, with Bright deciding to mark the end of the summer with a raspberry lambic style beer. Brewed using 60kg of locally grown raspberries from Bright Berry Farms, the brewers tell us it pours an "eye-catching red/pink colour" and has a "distinct berry aroma" that "leads into a tart upfront flavour which is instantly recognisable as raspberry". It's the first time they've made the beer in three years but… Read more
Golden

The latest specialty release from Mornington Peninsula will be hoping to catch the last of the summer as it's their take on the Saison style brewed in Belgium for the benefit of thirsty harvest workers. We've yet to get Crafty's smackers around it, but if the quality of its predecessor, the wonderfully full-flavoured IPA is anything to go by, we won't be wasting any time in doing so. According to brewer AG, the beer "pours a hazy orange colour with an off white head" with "tart and… Read more
Golden

A massive beer to launch a massive new range from Murray's, the Imperious is to Belgian beers what the Wild Thing is to stouts. This experimental Imperial Belgian Blond is the highest ABV beer Murray's has brewed to date. It contains a blend of British and German malts, fresh New Zealand-grown hops, and a classic Belgian yeast strain. This gives it a classic Belgian yeast profile ' strong esters and light phenolics - along with a tropical hop character (sweet mouthfilling apricot/stonefruit-like… Read more
Golden Yellow

Originally under construction for The Local Taphouse's Great Australian Beer SpecTAPular - and intended as a prototype for a potential third permanent member of the brewery's lineup - this beer became a fundraising tool when the floods hit Queensland early in 2011. Given it's a red beer and it was hoping to raise around $20,000 for the Flood Relief appeal, the name came easy. As for the beer, it's a darker beast than anything (except perhaps their occasional Stone Beer release) to come out of the… Read more
Rich Brown

With so much attention lavished on the other two members of the Chevalier range - the Saison and Biere de Garde - the Dunkel's been shunned a little: it's like the Beechworth Cinderella that's picked on and kept out of sight by her ugly sisters (although we're not suggesting there's anything ugly about either of those beers - quite the opposite). But just as Cinderella had her little glass slipper, so the Dunkelweizen has a little trick up its sleeve, in the form of a brand new recipe from brewer… Read more
Dark Brown

hey seem to like bucking the trend at Little Creatures. First their Pale (or Live as it was then) introduced the Aussie beer drinking world to US style hoppy pales. And now, while everyone else is using their limited releases to create something wild and crazy, they're firing out rather more traditional beers under their Single Batch banner, such as the Oatmeal Stout and now this, the East Kent Goldings Ale. It's a single hop affair, using the classic English hop that features in some of their other… Read more
Rich Brown

Punk by name, yet refined by nature, this seasonal from Murray's might sport a ravishing pink label but inside it's all rather elegant. For those who've gorged on some of the brewery's big, bold expressions of intent in recent months, it's a chance to give your palate a different sort of work out, one in which it is caressed by what brewer Shawn Sherlock claims is a hybrid of a few Belgian styles, influenced by Saisons and Belgian Blond Ales with a nod to Belgian Trippels. The classic estery and… Read more
Pale Yellow

ON TAP TWO NIGHTS ONLY!!! We like it when the brothers go big. First there was the Voodoo Porter, weighing in around 7% and so good it won a medal at last year's Australian International Beer Awards. Then came the funk: James Brown, the big Belgian armed with 1000kg of candi sugar that won an army of fans and was described by Biero's beer man as "bananas coated in Nutella - awesome!". And now they're back with their biggest beer yet: The Guvnor. An English barley wine packing a whopping… Read more
Rich Brown

So, there's a brewer at Mountain Goat called Craig. Craig was tasked to create a beer. He chose to brew a US-style Pale Ale, using Willamette hops to stand out from the herd. When the time came to tap the beer, it needed a name. "What shall we call it?" said the Goats. "How about The Craig?" came the reply. "No. We're not calling it The Craig," said Craig. "Tough. It's The Craig," came the reply. And so The Craig was tapped on the day the brewery flooded. It's… Read more
Rich Brown

In keeping with the brewery's philosophy of creating traditional beers comes the return of the Hargreaves Hill Abbey Dubbel, their take on the Trappist style of strong brown ale with its origins in Belgium. Theirs is a faithful recreation, weighing in around 7.5%, that uses a special strain of Westmalle yeast from Belgium. Hargreaves founder Simon Walkenhorst will tell you of "notes of raisin and sarsparilla gracing the palate, which is quite dry and lightly bitter giving a pleasant perception… Read more
Pale Yellow

Of all Red Hill's seasonals, this one seems to fly under the radar a little. Yet it holds its own as part of their Belgian trilogy alongside the Temptation and Christmas Ale. Full-bodied and creamy in the mouth, it offers up a mix of caramel malt characteristics, some spicy notes, a slightly sour tang and hoppy bitterness. They've only brewed one batch this year so you'll have to head to the brewery to taste on tap or pick up in bottles.… Read more
Golden

A fresh release of Grand Ridge's two limited release beers, the Mirboo Madness and Mirboo Midnight, have just hit shelves around Melbourne. The former - a highly hopped strong Red Ale awash with big hop aromas, sweet caramel, toffee and nut flavours and plenty of bitterness - has been aging in bottles since the initial draft only release and, according to Grand Ridge founder Eric Walters (who told Crafty upon its initial release it was the beer he'd been waiting years to make), "is tasting bloody… Read more
Dark Brown

The release of Mountain Goat's summery Skipping Girl on Wednesday doesn't appear to have stopped the rain so perhaps the release of a second seasonal this week from Victorian brewers will do the trick. This time it's the latest batch of Hargreaves Hill's Yarra Valley Pilsner, brewed with Summer Saaz, a variant of the famous Czech hop variety and lightly dry hopped. It's on tap in Melbourne from today and will be on the lineup of Aussie hoppy beers at Tuesday's Ale Stars session at The Local Taphouse… Read more
Pale Yellow