The latest seasonal from Bright Brewery sees them reining in the alcohol content after unleashing an Imperial Stout and punchy IPA in recent months. The Mystic Mild rocks in at just 3.0% but, that said, it's no flavour free zone or lager-like light. Nope, it's a beer that appears to look to the milds of the UK for inspiration, a deep amber / brown beer that, according to the brewers, is characterised by "raisin toast, dark bread and cigar box/cedar". It's on tap at the brewery now; we'll… Read more
Rich Brown

Red Hill Christmas Ale Time to break out the tinsel and get decorating the tree ' Christmas is a-coming. Which means the last of Red Hill's seasonals is a-coming too, a beer designed to accompany a rich Christmas pud on the big day. A strong Belgian ale in style, it pours a deep orange with a ruby tint and fires off all manner of sweet caramel and dried fruit aromas, topped off with spicy notes from the hops; at this early stage in its life, it's almost perfume like. Full-bodied and creamy, it's… Read more
Pale Yellow

Around Melbourne and the Mornington Peninsula from Dec 9

A Red Duck limited release that hasn't seen the light of day for quite some time. The Golden Dragon is another that continues brewer Scott Wilson-Browne's love of big, malt-led British styles. It's a strong Celtic Ale that sits nicely alongside other Red Duck limited releases such as the whisky barrel-aged Loch Ness and last year's Red Admiral. A complex bugger that can offer up treacle, caramel, stewed and dark fruit flavours with an earthiness and spiciness too, it's one to savour.… Read more
Rich Brown

A beer with an air of mystery surrounding it... Those that attended the last Victorian Microbrewery Showcase may have been intrigued by this African Amber Ale: what constitutes an African Amber Ale? It was suggested it may have been a yeast strain from deep within the Congo, but the truth of the matter could be just as enigmatic as the origins of the mother continent itself. To throw another spanner into the works the packaged version of this beer gives a nod to its little brother (the Rusty Pale… Read more
Rich Brown

Of all the beers Red Hill produce, this, apparently, is the brewer's favourite. It's easy to see why. Inspired by a pilsner-drinking session in a pub in New Zealand a few years ago, it stands apart from most beers of its ilk on the market by being fuller and richer in the mouth than you might expect thanks to its relatively high alcohol content. The nose combines lemon, sweet honey and a hint of spiciness from the hops, the flavour offers masses of biscuity malts and there's a nice firm bitterness… Read more
Golden Yellow

They do enjoy playing with their stout down at Moo, with this latest release a joint venture with Tasmania's Lark Distillery. MONA bar manager arranged the supply of a 100 litre barrel, which had previously had whisky aged in it for six years, which was filled with Moo Brew Stout, from which four 20 litre kegs were produced. The first keg was tapped at the screening of Beer Wars at the Museum of Old and New Art cinema, a second is being tapped at the distillery on November 20, where punters will… Read more
Black

A beer we first tasted at the brewery this time last year is a spice-laden Halloween special designed by the Murray's brewers to be as close to pumpkin pie in a glass as possible. To a mix of British and German Malts are added more than 50kg of dry roasted pumpkin to the mash, adding "a subtle sweetness and pumpkin aroma and flavour that is enhanced by the spice additions". Those spices are cinnamon, nutmeg and allspice, all added late in the boil to blend with the malts. Launched for Halloween… Read more
Golden

Now they've started they just can't stop. Hot on the heels of the Skunkworks is a return of the Pumpkin Porter that made an appearance in smaller volumes last Halloween. Featurig 35kg of roast pumpkin in the boil (plus honey, cloves, cinnamon and nutmeg), the only thing that is missing is the usual barmpot Moon Dog name. According to the boys, it's "a black ale with golden-red hues", "dark, smooth and roasty" with "hints of dark malts on the nose" ending with spice and… Read more
Dark Brown

An annual release from Van Dieman that makes full use of the brewery's farm location. Each year just after the first winter frosts, Will heads around the land collecting berries and fruits from the hedgerows and adds them to this rich, malty ale. The beer spends six weeks maturing on sloes, rose hips and hawthorn berries before bottle conditioning for six months. The process adds a layer of forest fruits to the beer, complementing its spicy, earthy hop character well in our pick of the brewery's… Read more
Rich Brown

To celebrate its quarter century of bringing traditional British style ales to the people of The Rocks, the Lord Nelson did the obvious thing: they brewed a Belgian ale! Launched on the night of their anniversary dinner, an occasion on which they paired their beers with classic dishes from the 80s, 90s and 00s, it's a strong golden ale style and really quite delicious. Clean and sparkling in the wine glass in which it's being served, it has the lightly spicy, citrus peel aroma typical of the style,… Read more
Golden Yellow

Back in time for the warmer weather is Holgate's take on the Belgian witbier style, this time with a new recipe. Following in the footsteps of tweaks to many of their beers, from the Hopinator to the Pilsner, the White Ale returned late in 2011 with a different yeast strain, one that seems to have boosted its "wit-iness". A beer that was previously drier, with hints of coriander and citrus characters, now has more of both, particularly on the citrus front (thanks to the addition of oranges… Read more
Golden Yellow

Silly Crafty. There we were, happily plodding along in the mistaken belief that the Tailpipe was one of Prickly MOses brewer Hendo's little playthings only on show at the Taste of Melbourne. But we were wrong, stumbling across it on our last visit to Slowbeer. And glad we were to be wrong, as it's claim that it's a 'Big Ass Brown Aleâ? is spot on and Big Ass Brown Ales are always welcome at Crafty Towers. As you'd expect from such a beer, there's plenty of everything, from the New World hops and… Read more
Dark Brown

It reminds you of the scale of the Little Creatures audience compared to most craft brewers in Australia when you see them describe the 7.8% strength of this beer as "massive alcohol percentage" on their website. Already, hardened beer lovers are popping up claiming it's not big enough to warrant the double IPA epithet, yet to the vast majority of Little Creatures drinkers, this will be a massively boozy concoction. Perspective, people. Anyway, we digress slightly. What of the beer itself,… Read more
Golden

The first version of the Bridge Road / Ní¸gne í? collaboration to hit the shelves Down Under is the one brewed by Ben Kraus on his return from Norway, using the same recipe as that concocted with Kjetil Jikiun earlier in the year. The story is that the pair of saison lovers decided to make one with a bunch of Aussie hops that weren't available in Europe at the time of the brew. Hop Products Australia sent Stella and Galaxy varieties over and both were used to create a highly hopped, high alcohol… Read more
Golden Yellow

Rye malt is starting to make an appearance with steadily increasingly regularity among Australia's craft brewers, from 3 Ravens roggenbier to IPAs from the likes of Mountain Goat and Feral. And it's easy to see why given its rather unique characteristics. This new limited release from Grand Ridge uses it to give a Vienna style lager - or Marzen - something of a twist. It gives the beer an added earthy, almost woody, character to go with its sweeter malty elements as well as the richer mouthfeel associated… Read more
Golden 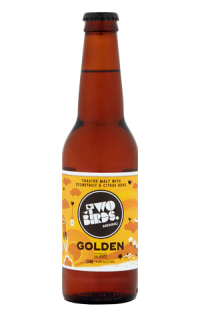 Where it all began the Birds. Having taken her leave from Mountain Goat to embark on what's turned out to be a rather successful venture with Danielle, Jayne's first beer was both a safe first step and one that epitomised the approachable side of her ethos. It was ale fairly prescient too, for while there are dozens of local brewers with golden ales on their rosters now, back in 2011 they weren't nearly as common. The beer itself is pretty much the baseline for what to expect from a contemporary… Read more
Golden Yellow

Of all the beers that were put on the lineup for the Festival of the Frothy, few had people more excited than this, a cognac barrel-aged Imperial Brown from Feral. Perhaps it was because it was a new beer from Feral, perhaps it was because the brewer Brendan Varis had called it the "most luscious" beer they'd ever created which, given the output from their Swan Valley base, is quite a claim. The result is a deeply dark brown beer and one that lives very much in the darker realms of flavour… Read more
Pale Yellow

One of the best gifts we received on the occasion of our first birthday at The Festival of the Frothy was the decision of the Moon Dog brewers to give us the first keg of Perverse Sexual Amalgam, a wild black ale to which has been added all manner of funky yeasts as well as, at some point in its existence inside some of their many barrels, tart cherry plums. The result is a deeply dark ale with a light white head that hints at a bright future for the boys. Sour and tart, for sure, but in a balanced,… Read more
Black

Festival of the Frothy

Having tested the water / teased the beer geeks over the past few months with occasional single keg releases, Moon Dog have finally got their brewery fully up and running and popped a beer into bottles. As you'd expect, said bottles are suitably off the wall, bringing lunacy to the land of labels (wonder what the collectors societies will make of them?), as well as upfront honesty with a complete list of ingredients and when they've been added to the brew. We're actually a little late with this… Read more
Rich Brown

Mountain Goat Helles To The Yeah

On the day they took the wrapping paper off their brand spanking new brewery and set about buffing it to the shiniest of finishes, Goat also unveiled a new lager. Helles To The Yeah is a bock, aka strong, version of a hell, aka pale German lager. It's not often the Goats stray from ales into lager territory, but this is a welcome detour. Malt led, with sweet, almost honeyed aromas and biscuity, toffee flavours, it's a sneakily potent brew, one that's nicely balanced in such a manner that the Nelson… Read more
Golden Yellow