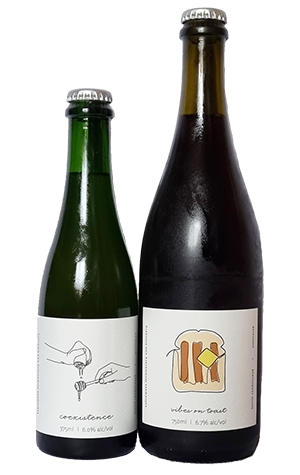 Coexistence might be freshly released in May 2022 but its history goes back some way. For one, it’s the second time Sobremesa Fermentary & Blendery have made it, although 2022’s iteration showcases different locally harvested produce compared with version one. Its story also goes back to their first release in 2020 too, with Coexistence using beer from a hogshead barrel that was filled with their first-ever release, Our Daily Brett, with that barrel now acting as a solera where a portion of beer is drawn out before more is added. While version one included lavender and honey, this one includes Meyer lemon zest from Rayners Orchard along with bush honey. That zest imparts an impressive amount of flavour too, with the first sip immediately bringing to mind the mellow and floral mix - as well as the intensity of flavour - you'll find in preserved lemons, while there's also quite a substantial bitterness. Even by saison standards, the beer pours particularly energetically which helps the flavours of melon, thyme and rosemary swirl between each other.

Vibes On Toast meanwhile, is a barrel-fermented bière de garde that’s been fittingly released in time for Melbourne’s colder months, with the beer boiled for three hours to produce a rich, caramelised base. By using a blend of lager, sasion and Brett yeasts, there's quite a complex mix of spice and a subtle acidity at play and elements of cherry, raisin and spiced fruit cake all come together at once. The beer pours a deep brown that somewhat resembles burnt toast, while the lightest touch of that flavour continues on the palate and is joined by burnt toffee but rather than being overly sweet, this bière de garde's vibe is one of a dry finish.