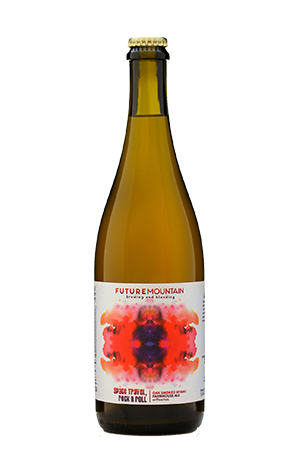 Many people might have favourite seasons but for me at least, it’s the time between seasons that are most appealing. Sure, okay maybe technically there is no time between seasons, here in Australia they supposedly finish on a specific day and begin on another but it’s the last days of one season and the early days of the next where I'd contend the light is best and things feel most sirene. Future Mountain’s Space Travel, Rock n Roll is a farmhouse ale that’s dedicated to those moments in Victoria; the autumn days where the sun still packs a punch in the early afternoon but where despite all appearances, you probably want to rug up in the morning.

Representing those colder mornings and nights is the oak smoked wheat malt used in the beer, while on summer’s side is the fresh white peaches from the Yarra Valley that were added for refermentation before packaging. Given the words “smoke” and “beer” tend to most often be associated with Germany’s rauchbiers, it’s hard not to draw a connection between Space Travel and the bacony delights of such beers. Sure there are hints of that flavour but it’s more a gentle waft of oaky, somewhat rich smoke on display with a distinct aroma of fresh peach cutting against those campfire tones. Joining those flavours in Space Travel are more yeast-derived notes of cloves and white pepper and with a somewhat creamy texture to the beer's body, it's a beer that well suits those many non-existent days between seasons.