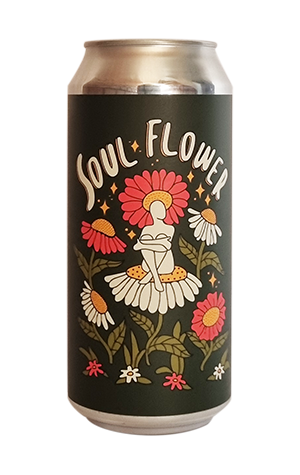 Since launching in 2020, Sobremesa Fermentary & Blendery have released multiple beers that really feel destined to be drunk outside but Soulflower might well be their parkiest park beer yet. That’s not merely due to the beer's name, label design or recipe, with the saison being their first release in cans. Hopped with Saaz, Styrian Golding and Tettnang, the beer was fermented in stainless with Sobremesa’s house saison strain before being can conditioned for six weeks.

Crack open the fermentary’s first can and you’ll find an aromatic mix of fresh flowers, lemon peel, cloves and pear. Dive in deeper and more underripe nectarine and further citrus elements come into play, while Soulflower's dryness make the beer particularly quaffable. Casey and Hannah from Sobremesa say it reminds them of listening to Khruangbin with mates in a new Bunnings camping chair - a point that seems almost cruel given Golden Plains didn’t happen over the most recent Victorian long weekend. Having said that, it doesn’t make it any less true…