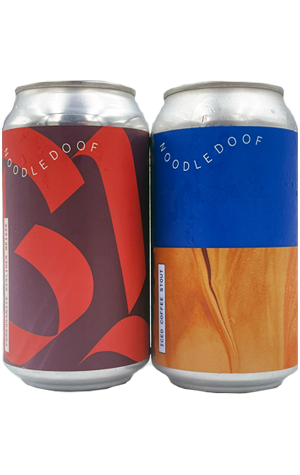 I gotta say, hats off to Noodledoof. As someone with a pomegranate tree in the back garden who does well to get hold of even ten percent of the ripe fruit each year before birds have ravaged the lot, respect to anyone who can get their hands on enough for a brew. Unless they bought them, of course, but that doesn't seem to be the Noodledoof way, given they seem to take as much pleasure in growing ingredients as they do making beers and spirits with them.

However they got them from tree to brewhouse, they used enough to give the Pomegranate Berliner Weisse a faint reddish tinge and some sweet-tart, fruit-derived flavours too. That said, the yeast strain chosen does as much of the heavy lifting, particularly on the nose where things are more sour than pomegranate sharp, in what's a breezy wee cleanser.

Perhaps view it as an amuse bouche for the other limited release to leave their Koroit home as summer was turning to autumn. The first stout I tried from these guys was their Rumball Tropical Stout, a beer that managed to be light on its feet despite a relatively hefty ABV. It's fair to say Iced Coffee Stout occupies a different part of the beer spectrum, but is also the sort of iced coffee I can get behind. This isn't your sugar-laden, big kids milk, but one packing plenty of roasty espresso horsepower. The lactose and vanilla bean certainly aid body – it’s pillowy if not creamy in all senses of that word – but the Motobean coffee and darker malts from Voyager have taken control of the steering wheel here.