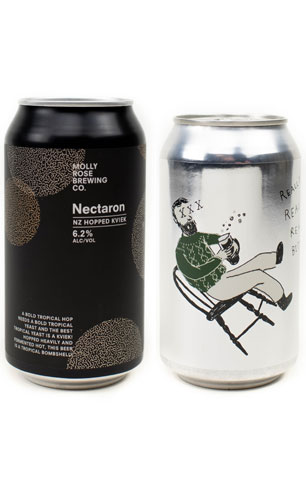 Scroll down for links to more NZ Hops beers

There's a risk inherent in a project like this – inviting a stack of brewers to create beers showcasing hops first and foremost – that you'll end up with a parade of IPAs. You can also assume that when it comes to Molly Rose they'll follow a different path; not this time, however, as the Collingwood brewers contribute one of eight IPAs within the dozen beers. That said, we know how diverse the world of IPA is these days, and here Molly Rose use a strain of their beloved kveik yeast fermented fast and hot to create something rather left of centre.

Give Nectaron time to open up and the sort of fleshy nectarine character that's a key feature of NZ's newest hype hop makes itself known. But early on the interplay of yeast-derived esters and said hops had me thinking of Harry Nilsson, which is no bad thing as the track sits on the album with one of my favourite covers of all time, as well as the hop variety that was in many ways a precursor for the likes of Sabro: Sorachi Ace.

Also known for their quirks are Sailors Grave, although head brewer Chris Moore chose this as the moment to pay tribute to his favourite beer on the planet: De Ranke XXX Bitter. While Really Really Really Bitter isn't a palate-shredder in the manner of some of the American IPAs of a decade or so ago, it certainly outstrips most such beers on the market in these soft 'n' sweet days. It leads with lean lime-mandarin-grapefruit-pith from the Motueka hops sitting within a pillowy base, while the Belgian yeast adds a dryness and a flicker of spice to the bitterness in what's a very enjoyable homage to Chris' idol.

You can read about other NZ Hops Great Brew Challenge beers here: Hemingway's and Working Title, CoConspirators and Mismatch, Uraidla and Mountain Culture, Deeds and Six String and Range and Your Mates.

You can order packs from Carwyn Cellars here