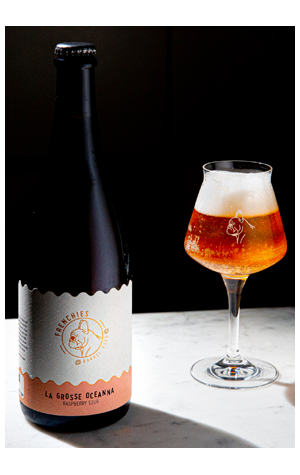 Frenchies are certainly no strangers to wood. In fact, you could even go so far as to say that if wood was moving house, and they’d spent all their money buying a dilapidated shack for seven million dollars and could only afford to hire a ute for the move, they could get Frenchies on the blower and know that, within hours, they’d both be awkwardly trying to tie a mattress on top of a bookshelf.

Up until recently however, Frenchies’ expeditions into woods have been limited to barrel-ageing and mixed fermentation. While one of their two new releases for spring 2021 is very much in that vein, the other is an entirely different approach to brewing with wood.

Once upon a time, all pilsners would have been lagered in wood. Huge oak vessels called foeders were at one time the standard practice for making lagered beer throughout Europe. For Forêt, Frenchies have opted to recreate an oaked pilsner of yore by brewing a Strisselspalt-hopped pils and lagering it on oak for 100 days. The beer pours a brilliant, shimmering gold with a luscious head. At first, the nose is all classic grainy pils with herbaceous noble hop but after a few minutes it opens into honeyed wafer biscuits. The oak character is pronounced, providing smooth vanilla and an almost smoky sandalwood note atop the underlying classic pilsner base.

It sounds like a weird mishmash of flavours but Forêt is very much a clean, crisp pilsner at heart and a very fun beer to drink.

Like Frenchies’ previous barrel aged beers, La Grosse Oceanna started as a clean saison ferment in stainless using a French saison yeast with the addition of fresh raspberries. It was then transferred to the barrels with a combination of Brettanomyces, lactobacillus and Pediococcus, blended with some Belgian tripel and more raspberries then left for six months. The final product is a result of the barrels being blended, bottled and conditioned for a further six months.

For a beer more than a year in the making, La Grosse Oceanna is remarkably fresh. There is the initial hit of dusty raspberries but that dissipates quickly along with any vestige of head. Raspberries are wonderful fruit for brewing with, as they provide so much bang for buck in terms of colour and flavour. Here, the nose is bursting with tart berry and vanilla with just a whisper of funk. The palate is vibrant raspberry sherbet with restrained acidity and a soft, dry finish. It’s actually kind of amazing how such a complex process could create such a simple, beautiful beer.