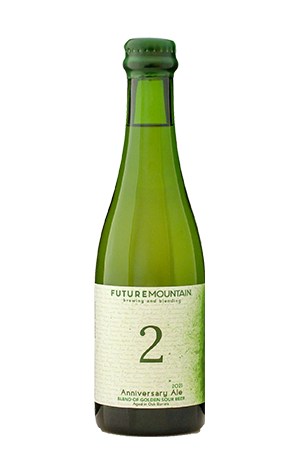 When you call a beer your grand cru release, AKA your most premium blend of the year, it seems a bit of a high risk idea to invite a group of people who've never made a beer to help create it. But that’s just what Future Mountain did with Anniversary Ale 2, inviting locals who supported them throughout lockdowns to help agree the final blend. You can read more about the story behind the beer here.

Thankfully, under Ian and Shane's guidance, any lack of brewing or blending experience hasn’t had a negative impact on how the beer actually tastes. Instead, it’s a delicate, subtle and well-structured beer in which the flavours move between sherbety lemon, grapefruit rind, nectarine and on to an earthy funk. There’s a substantial acidity at play too, but thanks to the underlying fruited notes, it’s a fitting and balanced blend with which to celebrate the barrel-aged brewers' and blenders' second birthday.