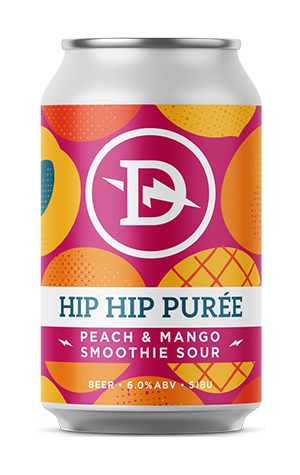 For some craft beer drinkers, warmer weather leads to a switch-up in drinking habits - out go the stouts and in come the crisp lagers or pale and hoppy drops. But given we’re fast approaching a time when produce shelves begin to fill with mangos and stone fruit, the fruit heavy can hit the right notes too, even if they’re a little richer and heavier rather than sessionable.

Dainton Beer are ready for such an occasion with Hip Hip Purée; a peach and mango smoothie sour made with the addition of lactose to help steer the beer’s texture to one of a thick and creamy beer. Though creamy can at times make you think “sweet”, there’s not really any of that here, instead, that creaminess is all about the mouthfeel. The flavour is unmistakably a combination of those two first and both promptly blend into one another - though mango packs a bit of a punch compared with its peachy contemporary - before a substantially tart grip comes through on the finish.