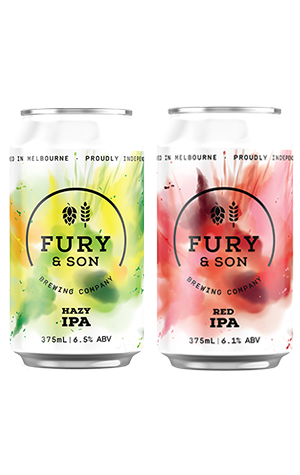 As prevalent as hazy beers are in the modern beer landscape, there’s still breweries dipping their toes into such waters. Fury & Son’s Hazy IPA is the first such can to come from the Keilor Park brewery, launching at the start of spring 2021 alongside another hopped-up release.

"Better late than never" are the words on the back of the can and that certainly seems apt, given the hazy beer is at once dripping with hops and rather sessionable. There's an immediate hit of mango juice which is soon joined by pineapple, nectarine and grapefruit, but the balancing act comes from the beer's malt body where a slight sweetness is soon met by a building bitterness.

Its companion piece is Red IPA, which also brings its own balance via a hefty mix of hops alongside a far more substantial malt hit. Joining the striking crimson beer's rich toffee, caramel and fruit-like dried plum / raisin you'll find pine along with earthy and floral notes, grapefruit rind and a little mandarin, all combining for a classic red IPA designed for the warm days and cool nights of spring in Melbourne.

Save With Fury & Son Online