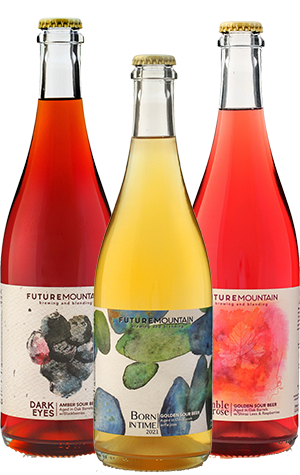 The relationship between Future Mountain and the Yarra Valley’s Rayner’s Orchard has been around since before the brewery even launched and that partnership has been responsible for many fruited releases from the brewers and blenders. It’s one that only continues to blossom and this trio of releases is an impressive showcase of seasonality in beer - which you can read more about here. They've been brought out in a new format for the brewery too, with each beer encased in glass bottles with the thinking being that it would help the team capture spring in a glass. It’s not the first time Dark Eyes has been brewed, in fact, it’s proved to be one of Future Mountain’s most popular barrel-aged fruited sour beers, which suggests there are some very big blackberry fans among Australia’s craft beer drinkers. After spending nine months on oak, the amber sour beer was transferred to sit on fresh blackberries to create a deeply red, slightly purple beer. Pouring with a spritely fizz and filled with earthy blackberry flavours and notes of juice - a word heavily used in craft beer in relation to hops but here I mean straight-up fruit juice - and a sweetness to the berries which is harmoniously countered by the beer’s sour side.

Next up is Born In Time, which pours an impressive golden yellow colour that brings the beer very close to natural wine territory. Here a golden sour spent eight weeks refermenting in oak with feijoas, which is a funny fruit in Australia - relatively popular but still one many haven’t got to enjoy. Whenever I smell one I’m immediately transported to playing soccer in primary school where a plant hung across the school’s fence, with those feijoa somehow being all that more appealing compared to the tree my parents' had given great care to growing at home. Here the smell is immediate and distinct, being close to kiwifruit, nearing pineapple but its own thing and Born In Time is absolutely bursting with the fruit, plus funk and further tart notes.

Finally, Ramble on Rose takes us even closer to the world of wine. Pouring a slightly lighter colour than Dark Eyes, it’s a beer with a vibrant and bright pink hue. Using both berries from Rayner's and shiraz lees from the Yarra Valley's Tiny Block winery, it presents with really fresh raspberry notes that contribute to the beer’s underlying tang while the shiraz lees seem to have added a really gripping touch to the mouthfeel. Of the three it's the one that most closely bridges the gap between wine and beer, being the most vinous while also being the tartest too.